And mountain waves, like avalanches crashed upon the decks,

and tried to have us wrecked.

but she rose and fell through the foam and the swell,

her sails were ripped and torn

on the way around the wild Cape Horn.

Here is a little video to help set the mood: (You might have to hit the back button after it’s over)

In the late 1970’s, having no boat, I resorted to the next best thing. I became an armchair sailor. In those years I read tale after mesmerizing tale of ships in the age of sail. Most of these stories could be divided into two categories: those who made it around Cape Horn and those that didn’t. Take the Bounty, for example, famous for the mutiny. For 29 days straight, Captain Bligh tried to round the Horn from east to west. Each day the Bounty was beaten back till finally the Captain turned her around, headed east and rounded the horn of Africa. He was not the only one who did the same thing.

Even as late as 1905, 133 ships left Europe bound for the West Coast of North America. 52 arrived at their destination, 4 wrecked, 22 put into ports of distress after Cape Horn damage, and 53 remain unaccounted for in a winter that brought some of the worst storms on record to a place already quite famous for them.

So, even today rounding the Horn is a sailor’s equivalent to climbing Mt. Everest. True, doing it in a cruise ship is like being helicoptered to Everest, but even veteran sailors on our ship were, like me, simply glad to finally see it.

We began the morning crossing the teeth of the Island of Deceit ( and who hasn’t at some time in their lives?) This is the northern end. 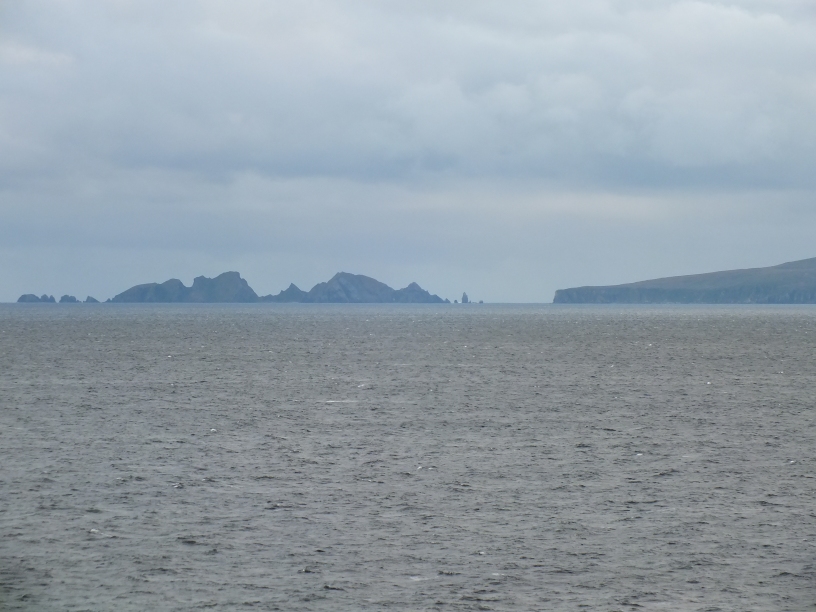 By the time we reached the southern end, there it was in the distance! Cape Horn! 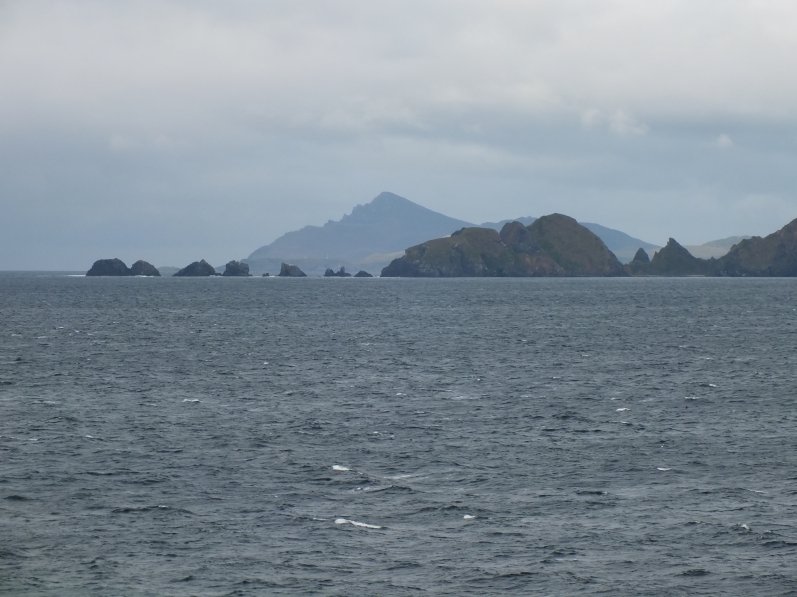 My chance had come at last! 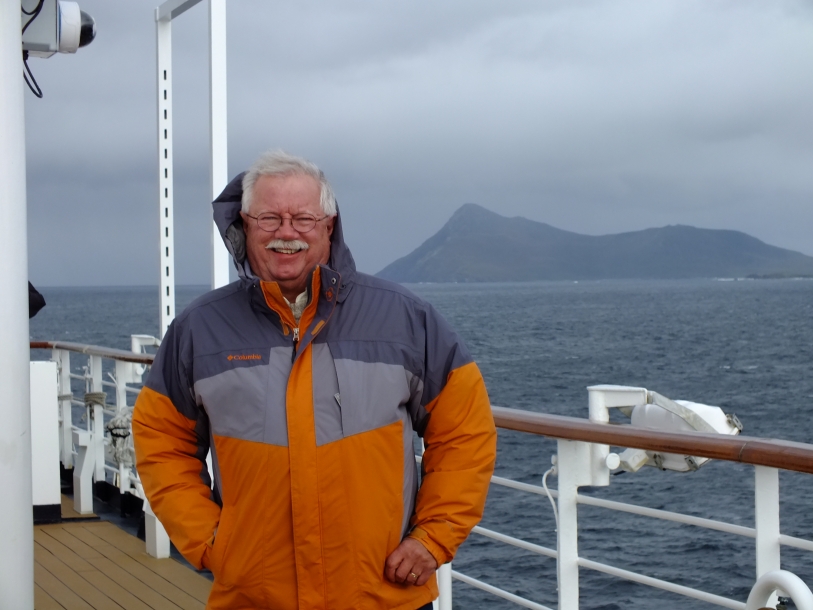 And, it looked every bit as cheerful as we hoped it would!

As we rounded her, her true nature was revealed:

Mariners can take comfort knowing that in case of, say, an engine failure, the Cape offers a nice soft beach to land on. 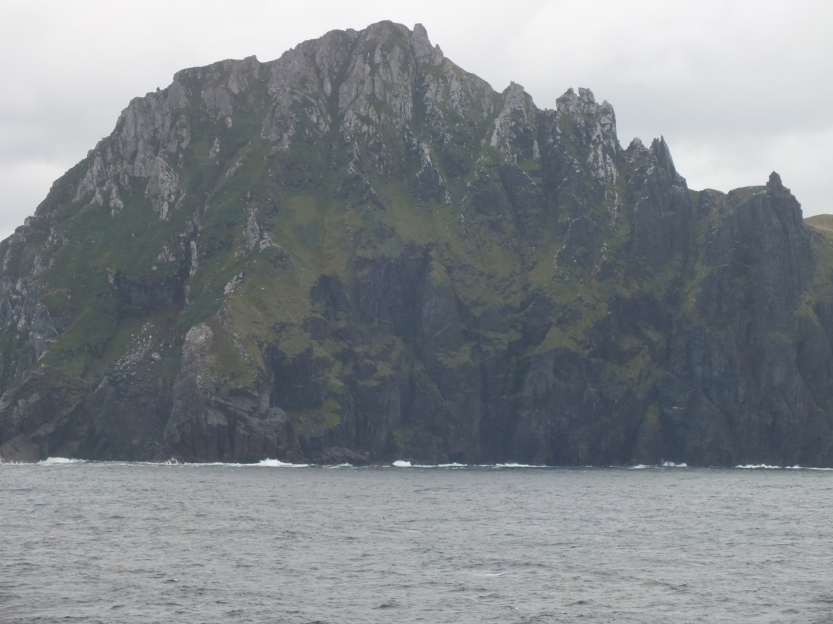 The Cape dead on, so to speak.

The first person to see Cape Horn saw it when just the highest promontory was sticking out of the fog. He assumed it was part of mainland South America and so, called it a cape. It is, however, an island, the southernmost in the cluster of islands that make up Tierra del Fuego. Tierra del Fuego translates as “Land of Fire” because when Magellan first sailed up his famous Strait the natives had lit bonfires all along the coast. Those particular natives never exactly took a shine to the palefaced visitors, so that to compound tragedies in this area, survivors of shipwrecks who found their way ashore were often killed by the natives.

The first person to see Cape Horn and understand that it was an island and that waters to the south might be navigable, was Sir Francis Drake. Sir Francis had made it all the way to the Pacific by going up the Magellan Strait. But, as soon as he made it to the open ocean a series of storms came up and blew him so far south that he could look north and see Cape Horn. When he got back he told everybody about the possibility of sailing around the Horn, but people were not much interested, preferring the Strait.

The Chilean government maintains a naval station behind the cape. 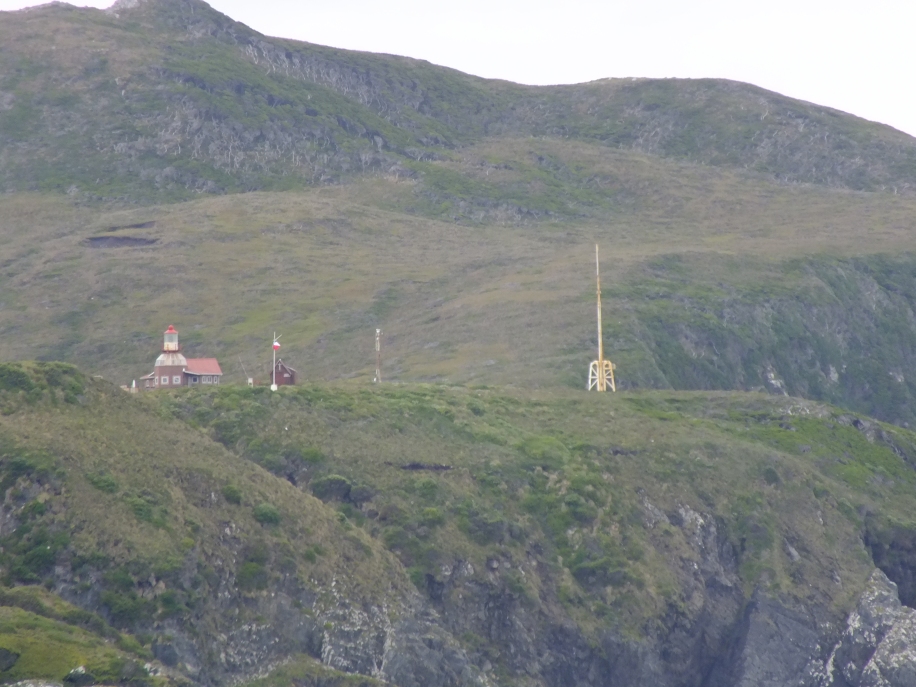 As you might imagine, Cape Horn is sacred ground for mariners the world over. In 1992 the Cape Horn Brotherhood placed a memorial to men of the sea from every nation who lost their lives struggling to round the Horn. As we rounded the Cape, the captain came over the PA system and said, “In honor of my colleagues who sailed these waters and did not return, I would like to read this poem which is inscribed at the memorial”.

I am the albatross that awaits you
At the end of the world.
I am the forgotten souls of dead mariners
Who passed Cape Horn
From all the oceans of the world.
But they did not die In the furious waves.
Today they sail on my wings
Toward eternity,
In the last crevice
Of the Antarctic winds.
Here is a photo from internet of the memorial, the only picture not mine that will be posted on this blog:

The memorial was built to withstand winds of 125 mph. The reason I used a photo taken by someone else is, this is how the memorial looked on the day we were there: 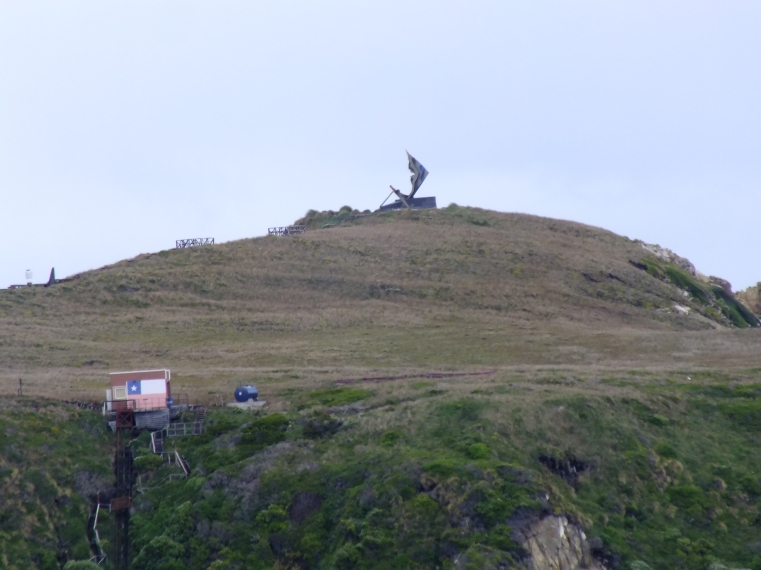 Repairs are under way.
Although there was a pretty fair breeze, some of us were somewhat disappointed that the weather was as good as it was. After we rounded the Horn we approached the Chilean station and they sent a boat out to pick up the pilot. No problemo!
It was sufficiently difficult picking up the pilot that they couldn’t get his luggage on. They sent a Zodiak over for that.

With the pilot safely off the ship, it was time to say goodbye to Cape Horn:

We were now being accompanied on a regular basis by an albatross. I checked my shipmates regularly to make sure none of them had a crossbow.

We had entered the famous Drake Passage. It was more than kind of Sir Francis to treat us to a beautiful sunset:

Tomorrow, at long last, we would be in Antarctica.