On Friday, February 6th we found ourselves docked at the beautiful city of Ushuaia, pronounced by the locals oosh-EYE-uh. This city sits on the Beagle Canal in the only part of Tierra del Fuego that belongs to Argentina. Its claim to fame is that it is the southernmost city in the world.

Unlike its Chilean counterparts, this is a modern and very lively resort city with a very busy private airport. It is also the place where almost all Antarctic expeditions are outfitted. The dock, was very busy. 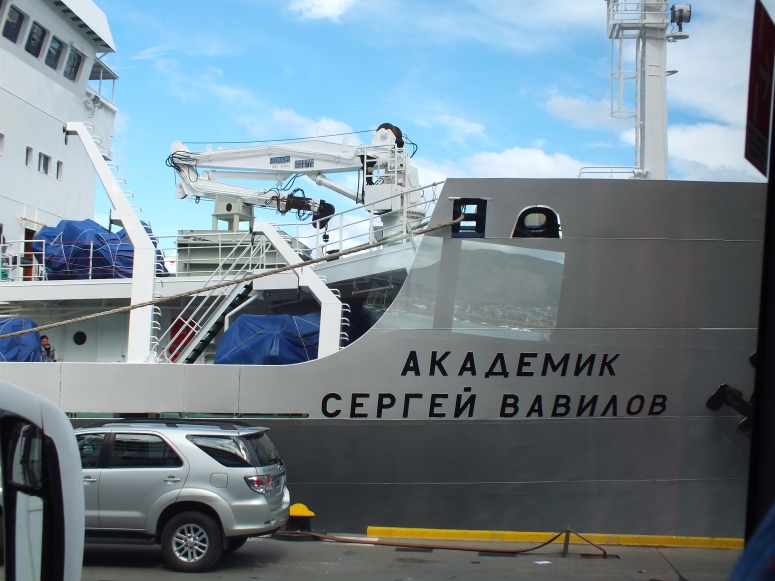 This one is part of a Russian fleet of research/tourist ships that operate in Antarctica. Last year a sister ship to this one got stuck in the ice and the tourists had to be helicoptered off.

This ship is an Italian tourist ship, much smaller than ours, which takes people to the Antarctic Peninsula, South Georgia Islands, and the Falklands all for a mere $16K per person. Bring the family!

This is an Argentine fishing trawler. It’s not hard to imagine the world’s fisheries are under stress with these things floating around.

Well, anyway, for our stop in Ushuaia, we decided to book the Travel with Alan tour to Tierra del Fuego National Park. This was a bus tour and we, once again, piled on with our shipmates. Photography on bus tours is always problematic. For one thing, you have a 50/50 chance of being on the right side. Then, the bus only stops at the destination. No scenic turnouts. So, while I would typically start a series of pictures like this with a picture of the sign at the entrance to the park, this time it was on the opposite side and we blew by it so fast it would have been pure luck to get it at all. So, picture this, a sign that says, “Tierra del Fuego National Park”.

We wound down a VERY dusty road for maybe a half hour or so and finally the bus pulled to a stop in front of this lake. Well, NanSea, who is with us on the bus says, you can take a hike around the lake, or just relax, or, there is a post office here that is the southernmost post office in the world. You have 20 minutes.

Well, I had read about this post office and I knew that they postmarked their mail “Fin del Mundo” or End of the World. Well, this is exactly what we wanted for the family, so I made a B-line for the place. But, there were 6 or 7 buses already here and the line was long. 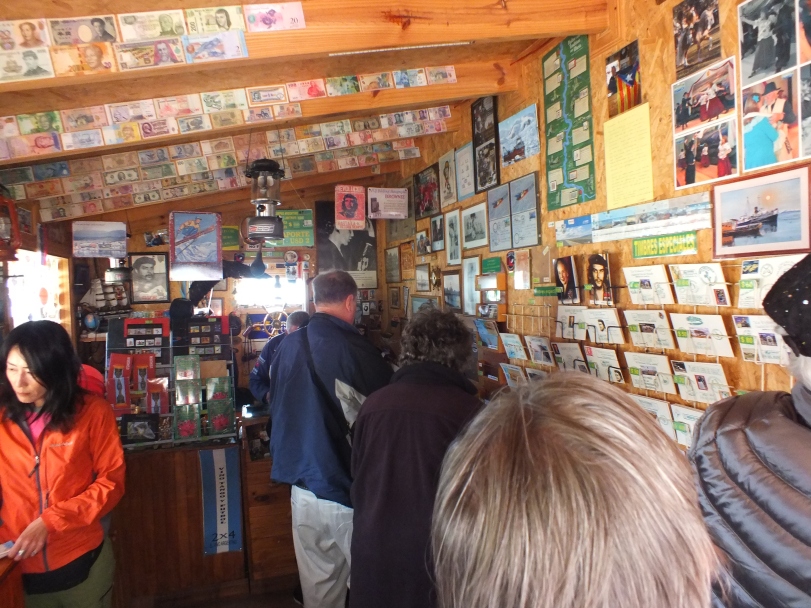 Yes, the line was long and it moved very slowly. Why? There was only ONE guy to wait on all these people! AND he was the most meticulous guy I ever saw. I knew trouble was on the rise.

There were some people from TWA in line ahead of me and they hadn’t even been waited on before NanSea sticks her head in with her all-too-familiar “The bus is leaving!” admonishment. Our friends ahead of me looked stressed, but they held their ground. And I held mine.

The way this place works is, they have a bunch of cards in the rack on the right. You pick the ones you want, take them up there and the guy stamps them with the famous stamp and then sells you stamps to mail them. In time, my peeps finally made it up there. Then more time passed. I was now three people from the finish line, the only person left from TWA. In pops NanSea again. “The bus is leaving, NOW!” I said, “Don’t tell me. Tell HIM!” pointing to the lonesome clerk. Off goes NanSea.

Finally I get to the counter. I got six cards. Then, in Spanish, had to figure out how much postage. We came to a conclusion at last and he slowly and CAREFULLY tore off EACH FRIGGIN” STAMP!. Then he says, “Next!” Whoa! He hadn’t stamped the cards! We corrected that in an instant and I was out the door. Back I go to a very quiet and late bus. Again I arrive at the same simple concept: If you don’t want us to go there, don’t bring us!

Somewhere on the trip from the post office to our next stop, a visitor center/gift shop, I finally had my “Come To Alan” moment, which is this: The most we can ever hope for, traveling in groups like this, is a snapshot of the destination. Forget about leisurely stops at a sidewalk cafe, or a visit to a nice museum. When you travel in groups you have a single, solemn duty: get in and get the hell out.

Here was our stop at the visitor center:

We went in, and they had lots of nice stuff. It didn’t matter to me. I was done standing in lines. Here is NanSea guiding one of our friends who was almost late:

OK, so now that I reached this level of zen, I also found that I had to appreciate the upside to group travel, which is first, of course, price. We were having a far better experience than people getting on that fancy ship in Ushuaia. We may not be getting the depth, but we were certainly getting the breadth. And, as I said at the beginning, we knew nothing about South America and less about Antarctica, a perfect situation for having the buffet instead of the 6-course dinner. I was at peace. NanSea should expect almost no trouble from me for the duration.

Our next stop was Lake Acigami, A beautiful fresh-water lake where the surf was definitely up. Then is it was time to go for a hike to Lapataia Bay

We started out in the lowlands and wound our way into a forest of trees that were very unfamiliar. 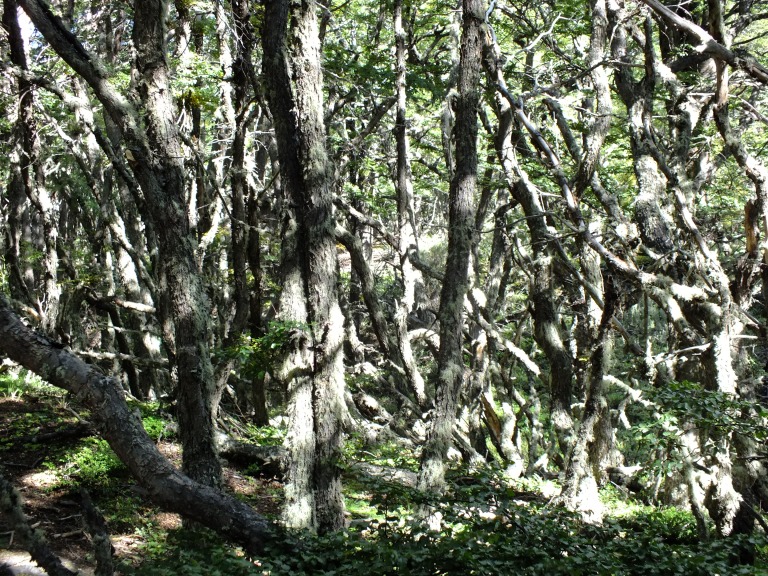 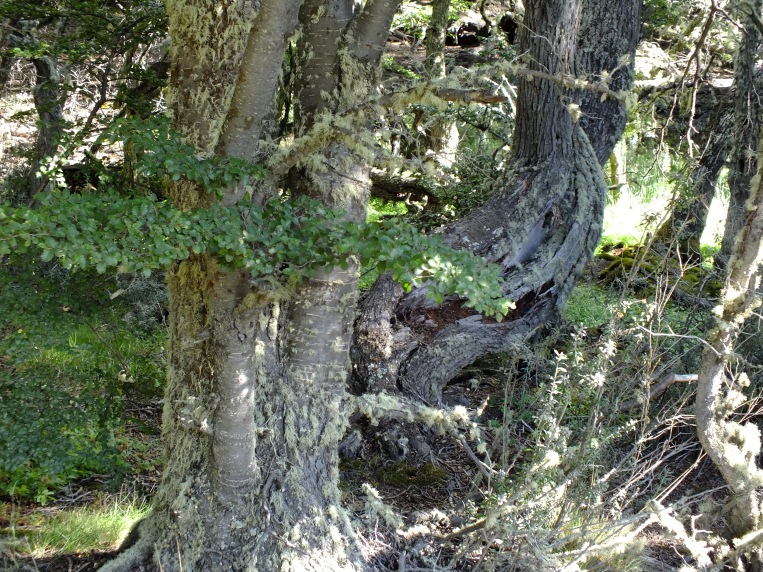 Finally we arrived at the overlook to Latataia Bay: 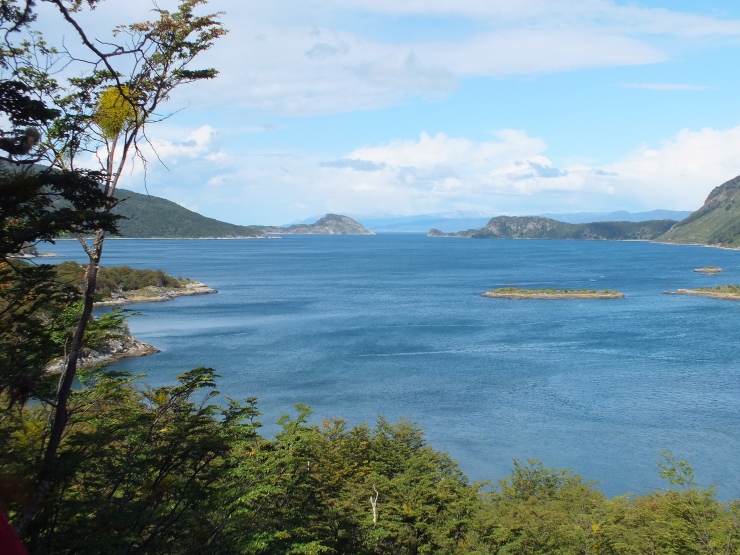 Not too hard on the eyes! From here we climbed down to the water level, where they have a park and boardwalk set up. 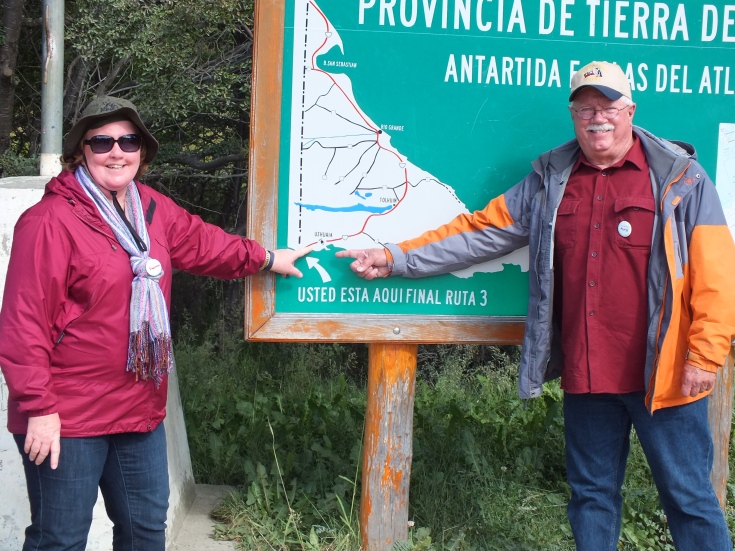 Here are a couple of sketchy road racers trying to convince the tourists that they had just traveled the entire length of the Pan-American Highway, which begins in Prudhoe Bay, Alaska and ends right here. Our friend, Ron Shafer, took this slightly more believable shot:

This sign spells out that the highway does end here, the beginning of which is 17,818 kilometers, or, as we like to say, 11,090 miles to the north. For those of you that have bucket lists, I suggest you add the complete Pan-American highway.

A very pleasant place to spend some time!

After this stop, the tour was over and we headed back into town. When we returned we found we still had a couple hours so we chose to be dropped off near the shopping district: 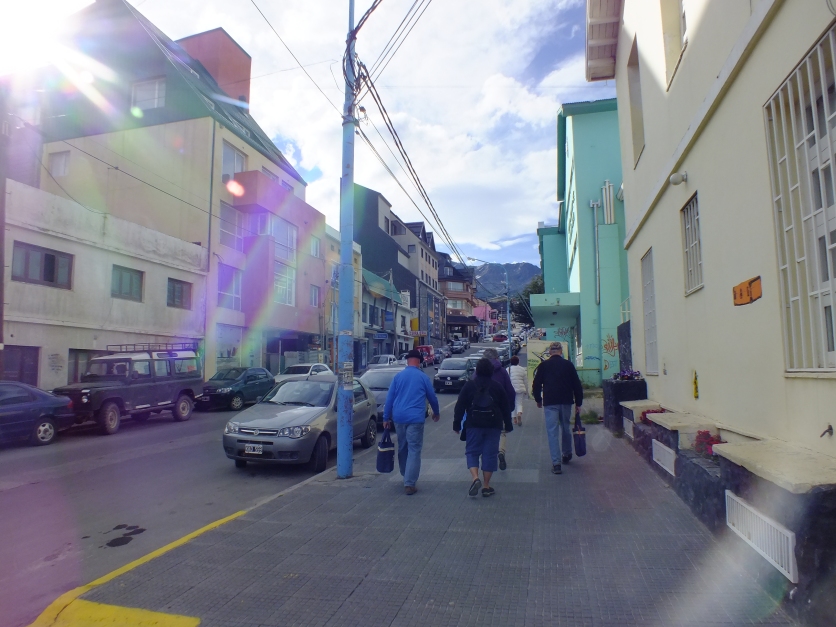 Ushuaia is a clean, modern town with all kinds of nice shops, although it was a little low on tourist goods, probably to their credit

In Argentina the exchange rate is a little under 9 pesos to the USD. While that was easier on my frazzled brain, it didn’t take long to learn that things are much more expensive here than in Chile. In the early 2000’s the Argentine economy almost completely collapsed, and, while they have come a long way back, the inflation rate is still over 20%. Made me wish I hadn’t converted quite so many USDs. I still have a few pesos so if anybody wants a few for hedging purposes, I’ve got a great rate!

Summer here is winding down, but the students are not yet back in school, There were quite a few here and just as we were heading back to the ship a rock band was tuning up on a nearby square. So, if you feel like REALLY heading south sometime, I’m pretty sure you could find a rockin’ good time in Ushuaia. Just keep those peso’s handy! For us, it was time to head back to home sweet home:

The border with Chile is very close by and that night we stopped near a very small village, probably Cabo de Hornos, Chile, to take on the pilot who would guide us to Cape Horn. Ushuaia was the last stop we would make for the next six days.