There is so much fine art in Florence that even if you lived here you probably wouldn’t see it all. And, while there is art in this blog, this is not an art blog. So, while we have hundreds of photos of works by the masters, there is no way to do them justice without spending the next year or so on nothing but art. Since this info is already readily available on the internet, you can easily call up just about every painting and sculpture in the city, if you want. Good luck.

So, what we will do instead is to give you sample of some of the works that, even weeks after returning to the US, continue to leave an impression on us and no doubt always will. You’ve already seen the David and his friends. Now we’ll head down the street to the Ufizzi Gallery, one of the largest in the world.

Once again, we took the advice of Rick Steves and hired a guide. So instead of waiting in this line

we got right in! Not only that, but she actually slowed us down and explained stuff that we otherwise would have blown on by. Money well spent indeed!

First of all, this place is HUGE. Not as big as the Louvre, but close enough. And, even the ceilings are works of art.

So we go into one of the first rooms, and here is this lovely couple:

Allow me to introduce you to Frederico II do Montefeltro and his wife Battista Sforza.

It doesn’t take long before you begin to notice that something ab0ut these people is a little odd. Take Frederico, for example:

Sure, the hat’s a little funny, but mostly it’s hard to ignore that schnoz. Our guide, who seemed to have a little flair for the dramatic in her own right, told us that, in his younger days, Frederico was a valiant soldier. He was leading his troops into battle against some other city state, when he took a blow to the right side of his face that not only removed a good portion of it, but also his right eye as well. In spite of these VERY severe injuries, he found that he could still function and he wanted to go back into battle. Problem was, he couldn’t see anything coming at him from his right. To fix that he called in the company surgeon and had him remove enough of his nose that he could see past it with his left eye. And back into battle he went.

Now that is one fine story, and it appears that it is mostly true. Only the timing is slightly off. Frederico, as it turns out, lost the right side of his face, eye included, in a jousting tournament. Later, contemplating going into battle, and being constantly annoyed by that obstructive proboscis, he brought in the surgeon. As it turns out, he was a very successful warrior and leader and later became the Duke of Urbino

Along the way, he married the beautiful Battista Sforza

Two things you will notice about Battista. First, she has quite the high forehead. Apparently women with high foreheads were considered to be more intelligent and desirable, so it was the custom to pluck away a few rows to boost the perceived IQ.

In addition, she has quite the hairdo and is dressed to the nines with pearls and so on. But the second most striking thing about her is that she is so pale. The reason for this is that, at the time this painting was made, she had already been dead for two years. Sadly, she died at age 25, having just given birth to her seventh child.

Frederico was crushed by her loss. He carried these paintings, bound in an ornate gilded folder,  with him wherever he went. He never remarried and lived out his life as a highly regarded statesman.

Below is a painting that might otherwise be unremarkable compared to the others in this place, except that it is the only known panel painting attributed to Michelangelo. The principle characters are Joseph, Mary and St. John and the  naked people in the background apparently symbolized humanity before the Law as given to Moses.

So the basic story line is goddesses are born in the sea foam. Then the winds blow them ashore

and the nymphs arise from the ground to welcome them home

But the real story of this painting and several others is Venus herself.Simonetta Cattaneo was born into a noble family in the Genoa area. When she was fifteen (or maybe sixteen) she married a nobleman named Marco Vespucci. They promptly moved to Florence. It took no time whatsoever for Simonetta Vespucci to catch the eye of every lecherous gentleman in the city. This included the Medici. At the time Lorenzo and his brother, Guiliano Medici, were jointly ruling the city. When Lorenzo was busy with affairs of state,  Guiliano apparently was interested in affairs of another type. In addition, every painter and poet in town were similarly smitten. Maybe none more so than Sandro Botticelli. Here is another of his masterpieces, La Primavera:

Does the lady in the middle look familiar?

She shows up in other Botticelli works also as well as the works of other painters. Simonetta Vespucci was the “it” girl of the renaissance. But, at age 22, she contracted tuberculosis and died. It is said that thousands accompanied her coffin to the Church of Ognissanti. There is no evidence that she ever had so much as an affair. Botticelli finished The Birth of Venus nine years later. He requested that when he died, that he be interred at Simonetta’s feet. Thirty-four years later, he was.

So here is another tale told by our guide. This painting is called Baptism of Christ and is attributed to the “workshop” of Andrea del Verrocchio. Verrocchio was apparently primarily a sculptor, but he maintained a school of promising young artists and when a painting would be commissioned he would have his students do most of the work.

One of those students was Leonardo di Vinci, who painted the angel on the left. He used a brush with a single hair to paint the hair on the angel.

The guide said that the envious Verrachio painted the angel on the right and then, in awe of Leonardo, put away his brushes and never painted again. Good story.

OK people, that is just a few of the bazillion paintings in the Ufizzi, but now you know why we won’t be doing more. As the great Rod Stewart once said,”Every Picture Tells a Story”. I would certainly suggest you go on line and see the rest.

Like just about every Italian city, art is everywhere. This is the Palazzo Veccio, home to the Medici Palace. If you look to the far right you will see a statue by the doorway. That is where The David originally stood. An imposter stands there now.

As you can see, a number of other statues are there as well.

And then there is this:

Now that is one big-ass golden turtle! Now he might look fine in an American city, but here? On the same square where Savanarola and his followers were burned to death for heresy? Let’s just say, he seemed a little out of place. Even Hercules had to look away.

Well, we’re going to do one more museum, then we must move on to other topics. Our next stop: 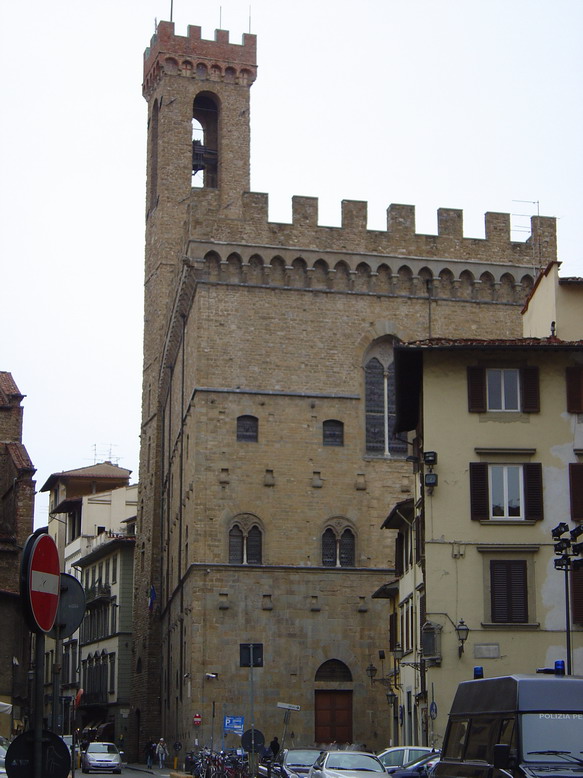 The Bargello, built in 1255 was once a barracks and a jail. Now it is an outstanding art museum. Let’s take a look:

Talk about tipsy! This is Michelangelo’s Bacchus, an early masterpiece.

I hate when those crazy satyrs show up.

If ever the colors in the marble made the piece, this is it.

But once again, where is the joy in the creator? This Daniele da Volterra‘s bust of Michelangelo.

Here is Michelangelo’s Brutus. No regrets. He killed a tyrant.

Then, in very stark contrast to the one we saw earlier, this is Donatello’s David.

You can choose between the three, but before you do, the best one may be in Rome, as you will see.

The incredible detail is beyond words to describe.

Yes, we could on and on, but we will close with one final work by Donatello, Santa Maria Maddalena Penitente. Mary Magdalene, at one time a beautiful harlot, became a follower of Jesus. After the crucifixion she went off to live in a cave as a penitent. Now thirty years later, the toll has been taken, but the prayers continue.

There is nothing else to say.