Cinque Terre is a series of five villages along a coastline known as the Italian Riviera. They are now encapsulated into a national park. Here is the layout. The blue box down at the bottom is roughly the location of La Spezia: 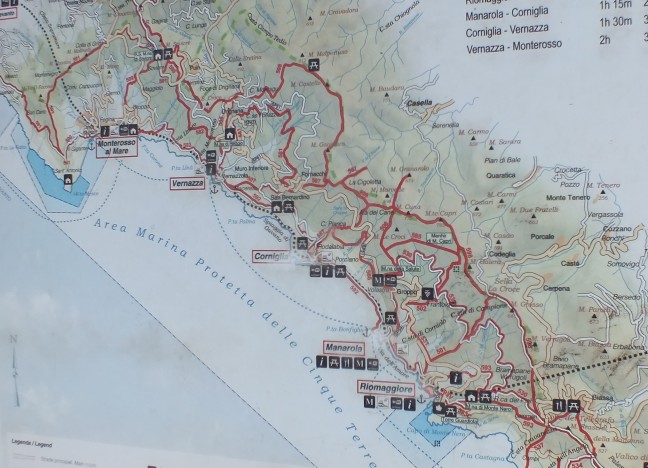 We decided that the best approach to visiting five villages in one day would be to go to the farthest one and work our way back. So, early in the morning we were on the train for the 50 minute ride to Monterosso. Even at that early hour, seats were hard to come by:

It was a pleasant enough ride, though, and soon we found ourselves in this beautiful village by the sea. 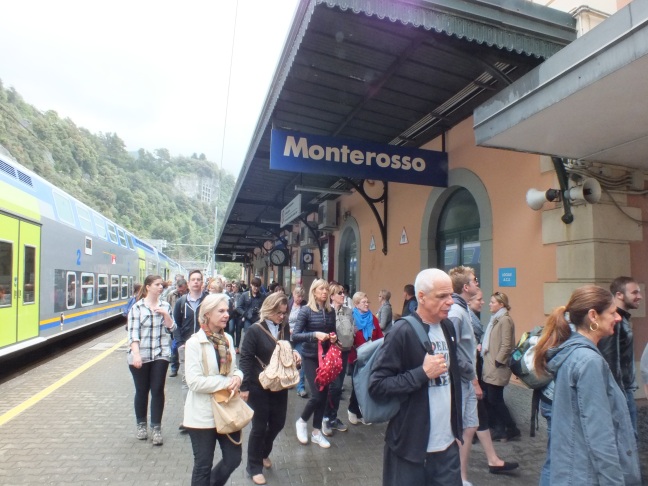 Monterosso is a summer resort, not only for tourists, but also day-trippers and weekenders from Florence and other nearby cities. Of the five villages this is the only one with an extended beach area. It also has the most hotels. It didn’t take long to appreciate the beauty of the place.

Of course, this time of year it’s a little nippy to be taking advantage of the beach. The first order of business was breakfast.

It was warm enough to sit outside, so we did. Next to us were four American students who spent the morning arguing about where to go next. Some wanted to go to Venice, others to Florence. And, of course, much of the discussion focused on the cost of going to each location, an expense which increased dramatically due to the fact that they had no plan. But, that’s the joy of being young!

Well, rather than listen to more of that, we had a fine breakfast and then headed to the beach. 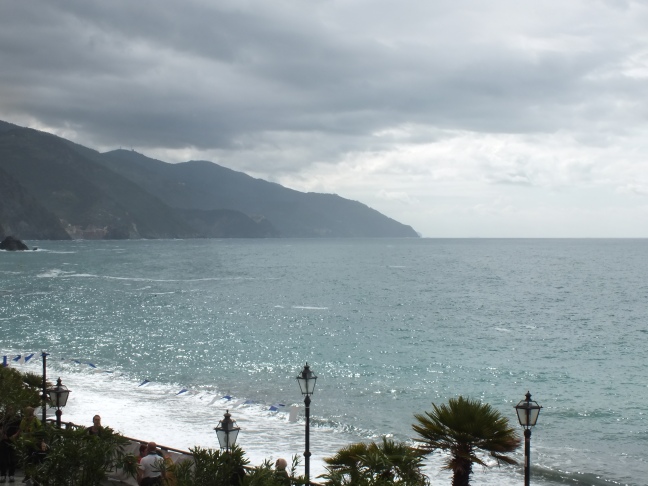 Dianne took the opportunity to dip her finger into the Mediterranean for the first time. That was the extent of our swimming.

Looking down the coast we could see our next destination, Vernazza.

Soon we were leaving the fishing boats behind and heading for the train. 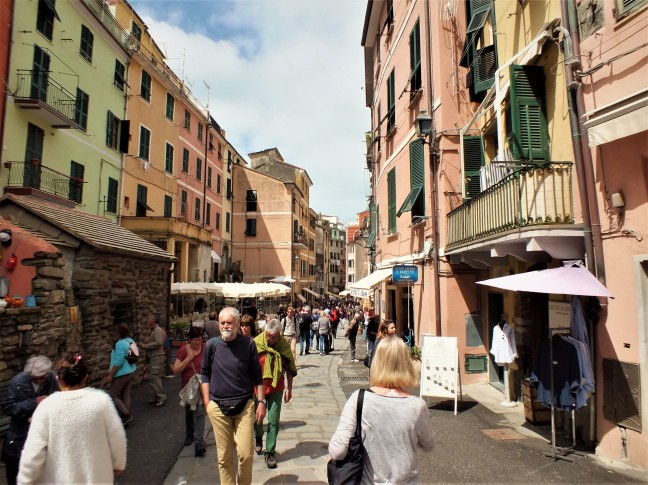 Vernazza is one quaint and gorgeous little town. It is a simple hike to edge of the sea.

Of the five villages, only Monterosso was ever a fishing village. The others relied principally on growing olives and grapes. To do that they had to terrace the hillsides. More about that later. 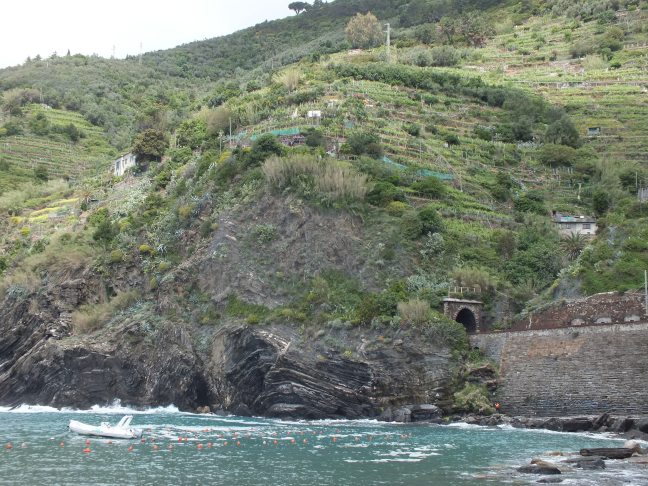 If you like a hike before breakfast, here’s your spot. 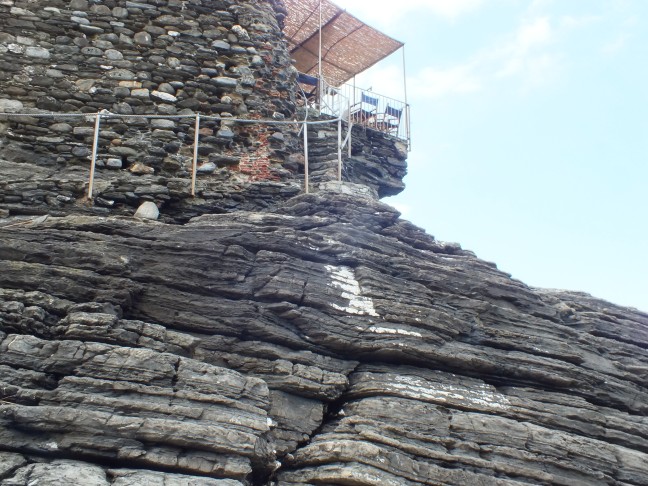 Here is the lower level 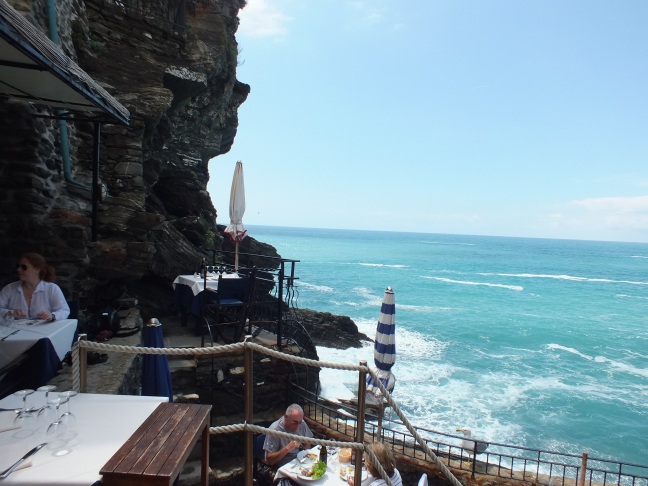 Even on a relatively calm day, the surf is up. 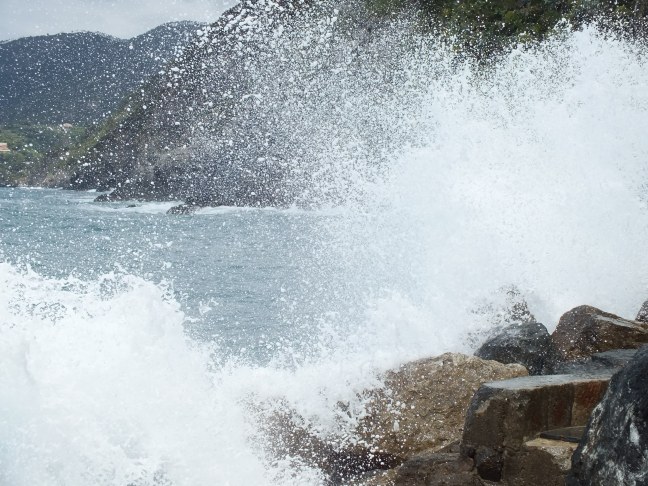 Everywhere there is radiant color.

The Church of Santa Margherita d’Antiochia, built around 1318, oversees the harbor:

One thing about Italy, love is always in the air, and often on the street:

Here is a young tourist making a beeline for one of the gift shops:

And returning, remembering how much room there is in her suitcase: 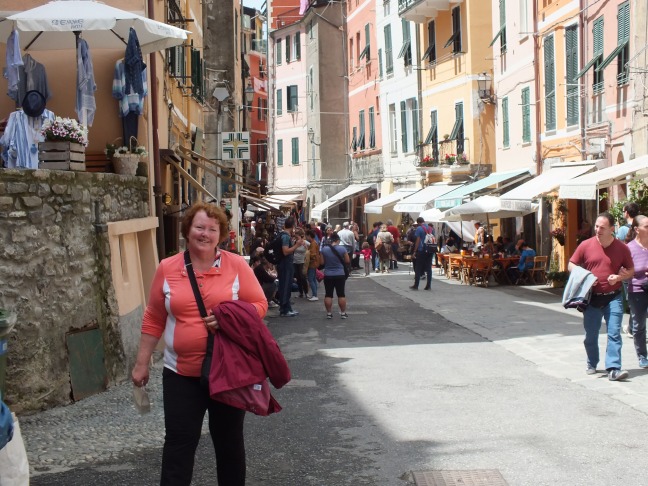 Vernazza is a place that deserves more than a visit of a few hours. But, that’s all we had, so on to Corniglia

Unlike the previous two villages, this one sits on a cliff. To get there you can either hike up that cliff, or, you can wait for a bus to pick you up.

The bus drops you off at a nice little central piazza:

But, if you think that by taking the bus, you have avoided hiking, well, not so: 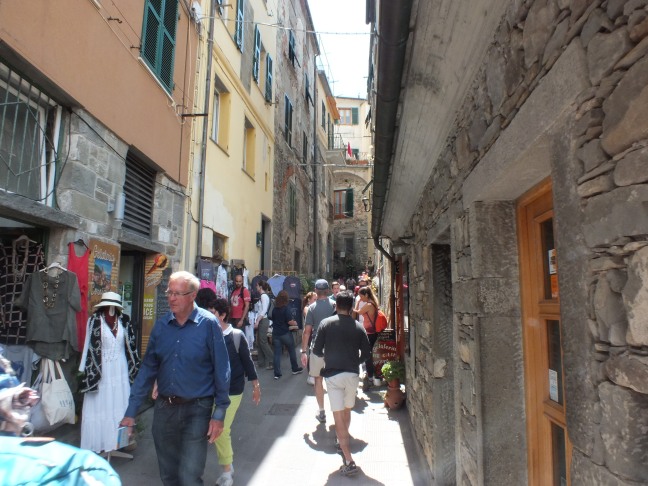 Everything is up in this place, which means if you look down you get some fabulous views: 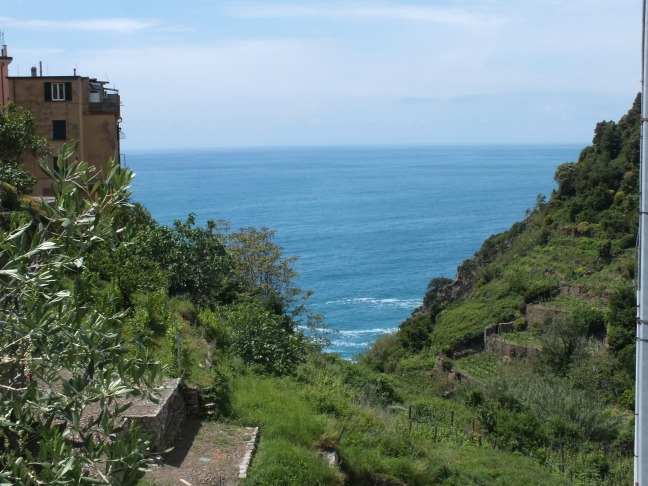 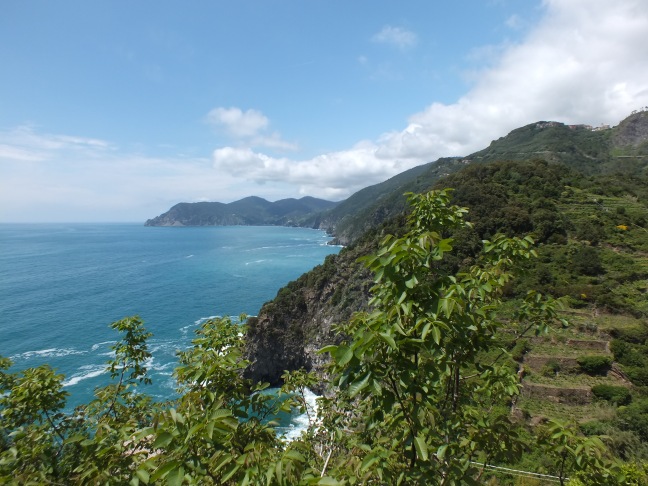 Here is a view of our next stop, Manarola:

It was time for a lunch break. We found a nice little spot overlooking the valley:

Below is the terrace where we were seated:

Farms on the hillside: 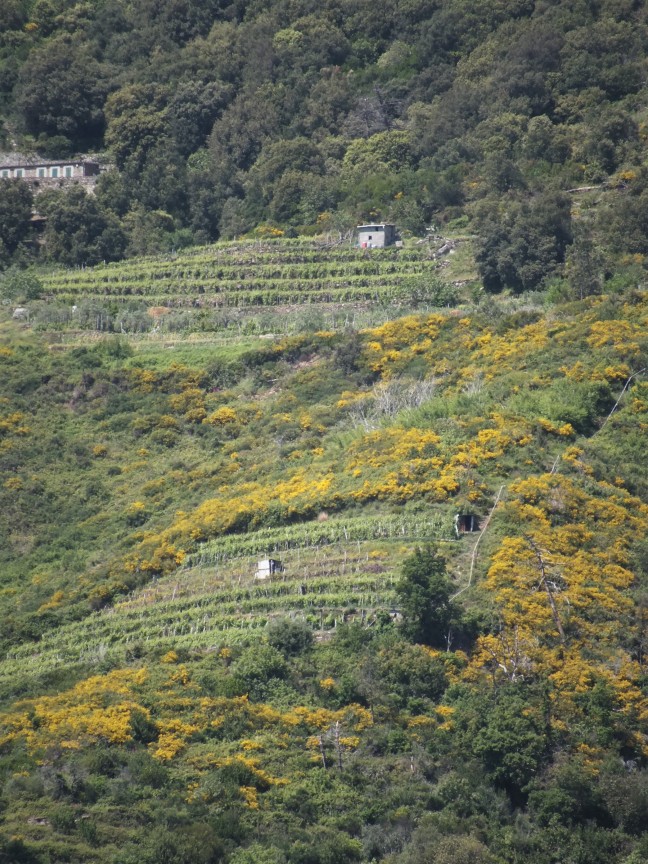 Here is the story of the terraced farms: 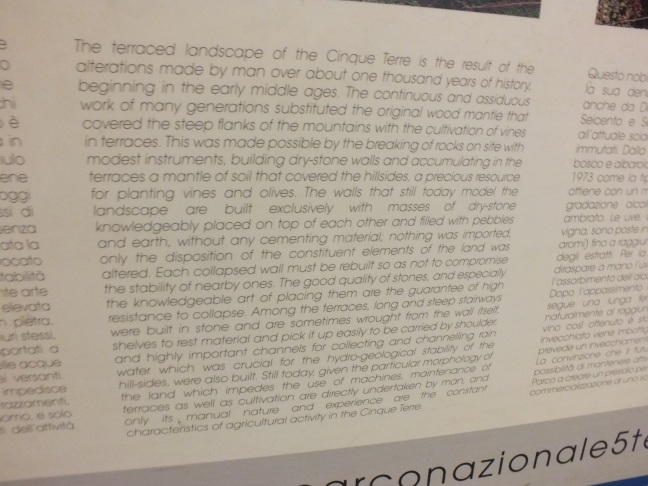 Just a beautiful place to be:

Equally charming is the village itself:

Lemons are grown in many places on the coast. 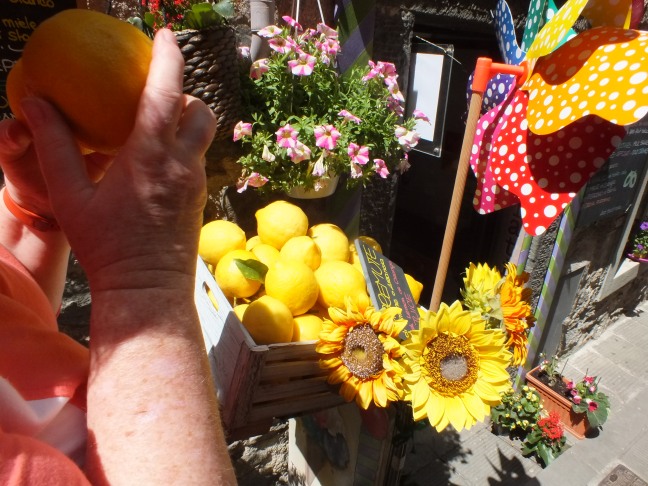 You never know what else you may find growing here as well: 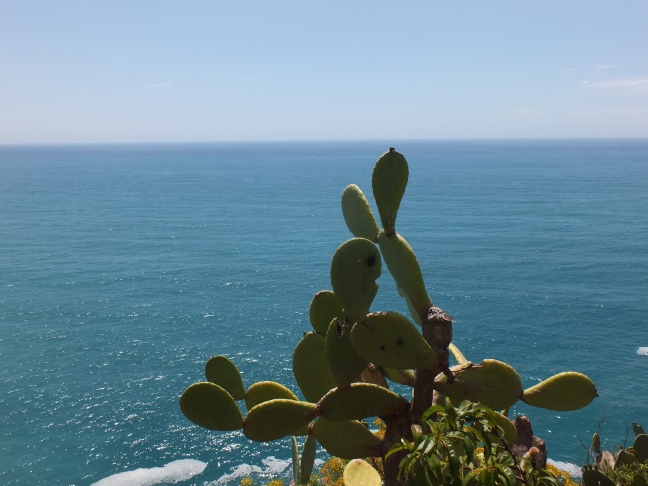 Another incredibly beautiful village. But, time to move on:

To get to this town from the train you have to walk through a long tunnel carved into the cliff. When you finally come out, here is what you see:

The one feature that is outstanding about Manarola, is that there is a walkway that takes you along the cliff face so you can look back over the village: 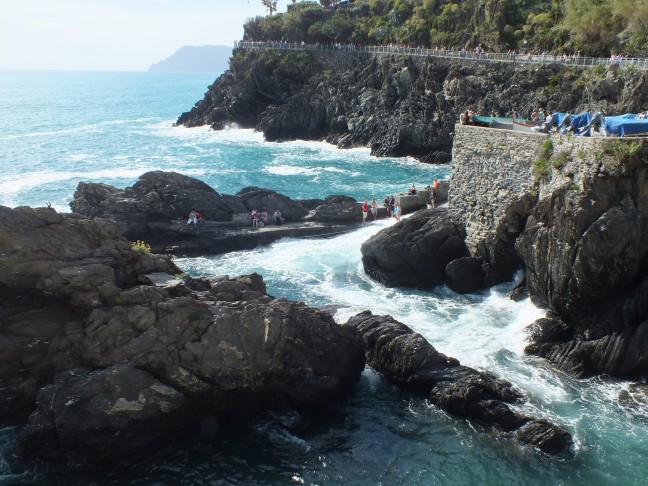 Not too hard on the eyes, that’s for sure. 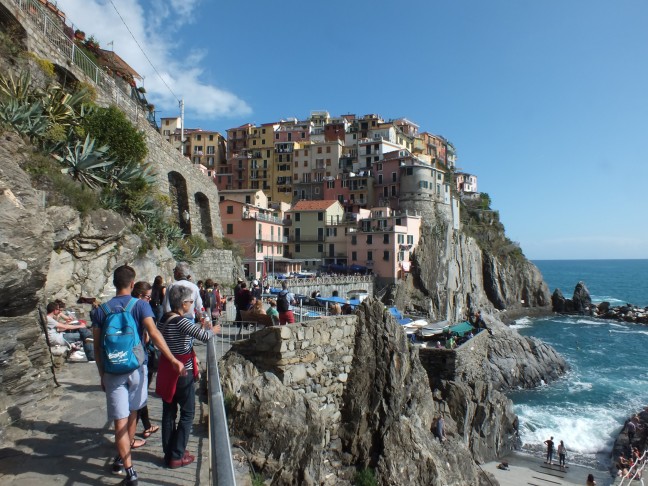 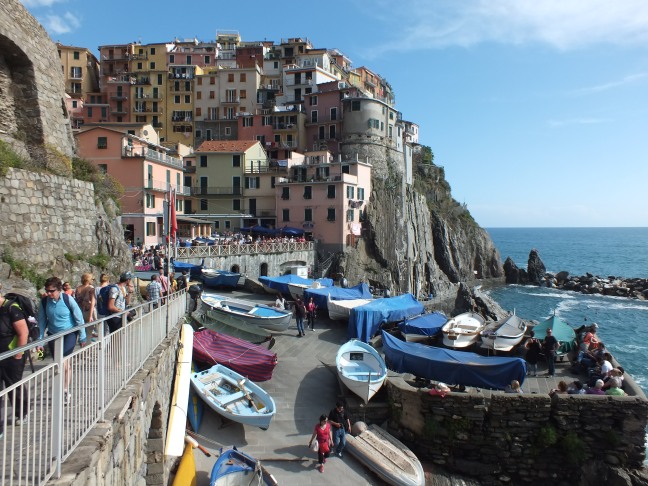 Time to move on to our last stop.

You may recall from my last post that we went here the day before. Unfortunately, since it was a spur of the moment decision, I didn’t have my camera with me. Dianne took a few pictures with her phone. I mixed in a couple from Google to give you the lay of the land.

I can tell you that it is much like the other villages, except that it is built on a hill, so the shops and restaurants sit at an angle. It would not be hard for, say, a beer bottle, accidentally knocked off a table to roll several hundred kilometers before it found its way to the sea. 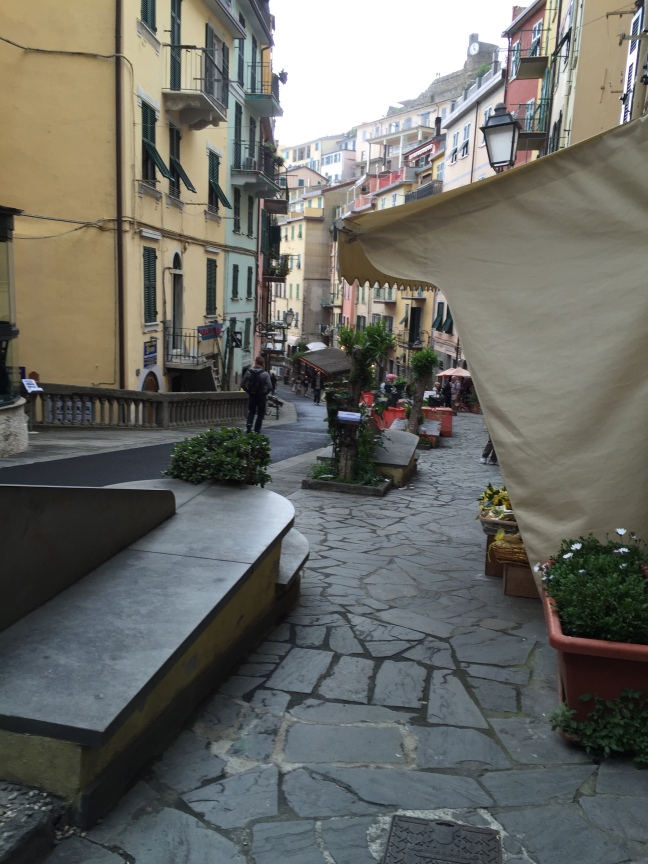 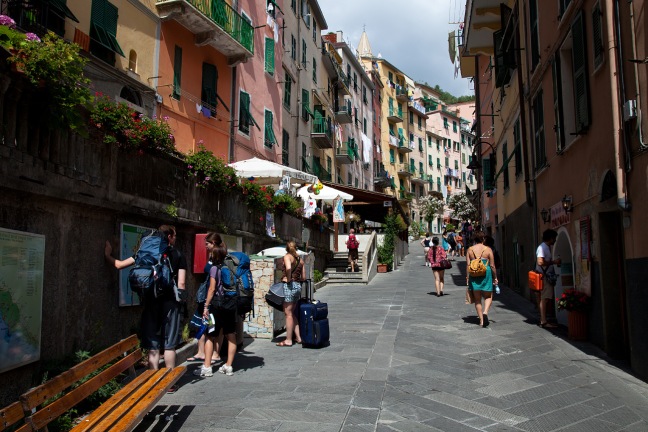 Cinque Terre, as you have seen, could easily be a destination on its own and you could spend weeks there and not see it all. I would add this caution, though. Last summer Italy was overwhelmed with tourists. Places like Rome and Florence were better able to handle it than islands like Venice, or small towns in the Cinque Terre. Things got so bad that certain of these places,  Cinque Terre included, began restricting the number of people they would let in. All the more reason to go in the shoulder seasons rather than fight the heat and the crowds.

Next up: A Leisurely Drive Through Tuscany.

© David Michael Stoner and Oldcapehorner, 2014-Present. Unauthorized use and/or duplication of this material without express and written permission from this site’s author and/or owner is strictly prohibited. Excerpts and links may be used, provided that full and clear credit is given to Mike Stoner and Oldcapehorner.wordpress.com with appropriate and specific direction to the original content.
Loading Comments...
Comment
×