I was blessed, if that’s the word, to have fingers and thumbs of the same width, so I can play this trick to absolute perfection. I first started by amusing our kids with it. I would, say, be slicing something with a big knife in the kitchen, then I would let out a loud yell. The kids would look up and I’d tell them that I just cut off my finger. Then I would pull half of it off using the above trick. What fun! Over the years I would do this for the benefit of our kids, their cousins, their friends, and, later, our grand kids. Endless hours of entertainment! Often kids who had seen it would ask to see it again the next time they came because they simply couldn’t believe it was possible!. To this day it still gets lots of laughs.

Our hotel in Florence is located across the river from the city center on the edge of a residential area consisting of apartments and mid-size homes. And, while Florence is home to many fine, upscale restaurants we were never sure enough of our schedule to make reservations at any of them. A couple times we made it back to the hotel just in time for their Manager’s Reception, an event like no other. To begin with, wine and beer were free with no limits on quantity. Then, on top of that, they put out tray after tray of tasty snacks. 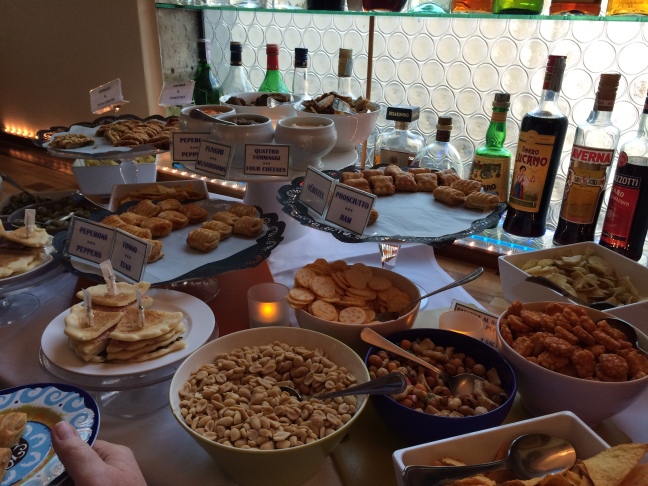 The Reception was held in this nice little garden. 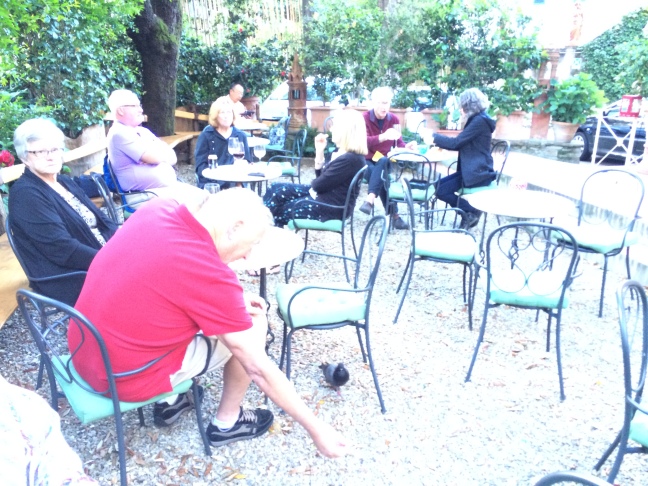 After spending time here the idea of a big dinner was not all that appealing. So we asked at the desk if there were any, say, pizza places or small restaurants nearby. Turns out there were several. We settled on a place called La Piperna. 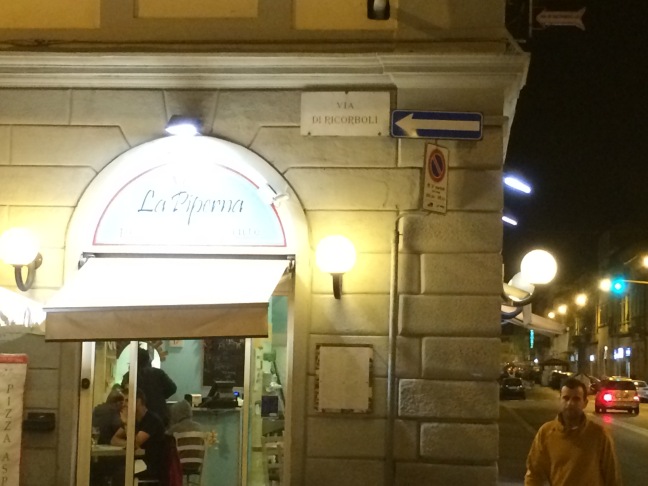 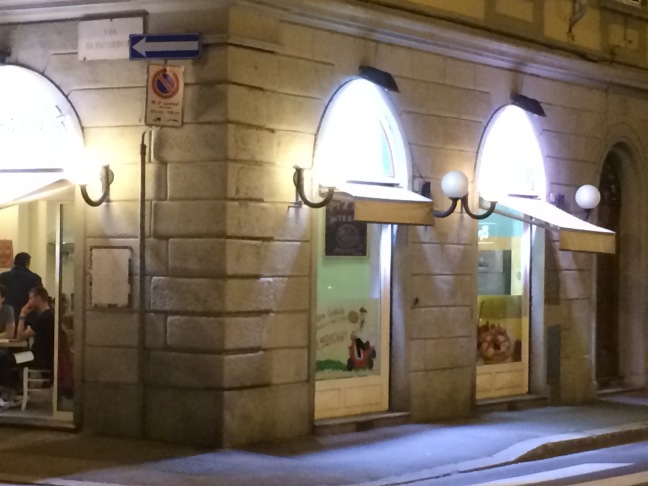 This is a classic neighborhood restaurant where everybody knows everybody, but when the occasional tourist stops in, they are greeted by friendly staff with English that is plenty good enough. Dianne got a pizza, 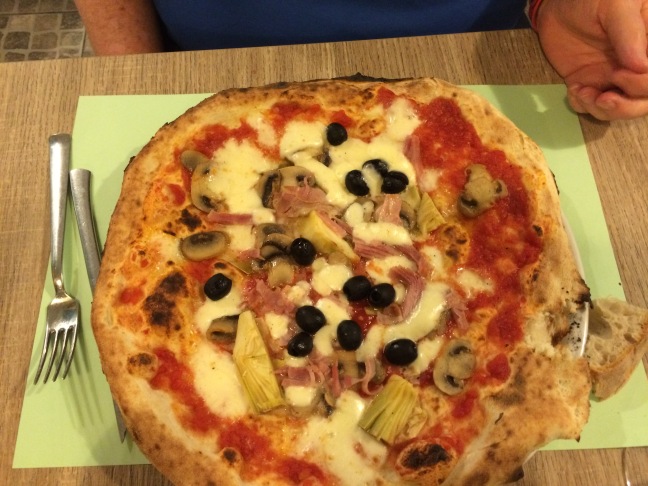 And I got a pasta dish with, yes, real, genuine anchovies! 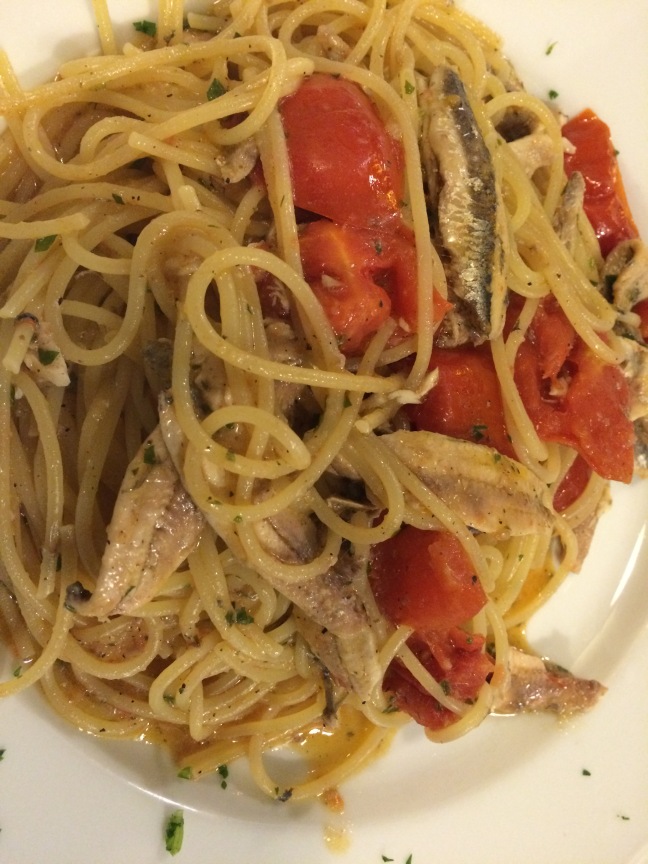 Well, at La Piperna, the tables are fairly close together and the waitress seated us at one near a family of three which included a little girl, probably five of six years old. The girl was a little antsy and from time to time she would get up on her knees and turn around on her chair and look the place over. Unfortunately, about all there was to look as was Dianne and me. Her mother would tell her the Italian equivalent, I suppose, of “Turn around and sit down!”, which she would do, but then soon she would be back up again looking around.

It didn’t take long for her to catch my eye and I would smile at her and she would smile back. Then her mother would tell her to sit down again. We repeated this cycle a few times. Pretty soon she was back up looking at me. I thought to myself, I bet she would enjoy my famous finger trick!

So, up goes my hand, and off goes my finger. Well, that little girls eyes grew as big as saucers and all of a sudden, she starts to cry! Loudly! Now, my eyes are as big as saucers. I won’t say this is the first time I have ever gotten that reaction, but it doesn’t happen often. Thankfully the girl’s father saw the whole thing and understood that this was an attempt at humor and I was not trying to traumatize the kid. So he said something to her which must have been, “It’s only a trick.”

That did not exactly calm her down. Then the waitress shows up at their table with a cake. Turns out they were there celebrating the mother’s birthday. Which was now not much of a celebration with the kid wailing away. I was mortified. Thankfully, when the girl saw the cake, my abuse was quickly forgotten. Eventually the mother gave me a half-hearted smile so I was reasonably confident I would not have to call the US embassy to seek shelter. I was, however, glad to settle up and get the hell out of there.

That will probably be my last finger trick on foreign soil.

On our last day in Florence we agreed that if we saw any more art our heads might explode. Instead, we turned our attention to the sciences with a visit to the Galileo Museum. This museum, of course, is dedicated to the man himself, but also contains an extraordinary collection of scientific instruments now centuries old.

At the entrance is a bust of Galileo, 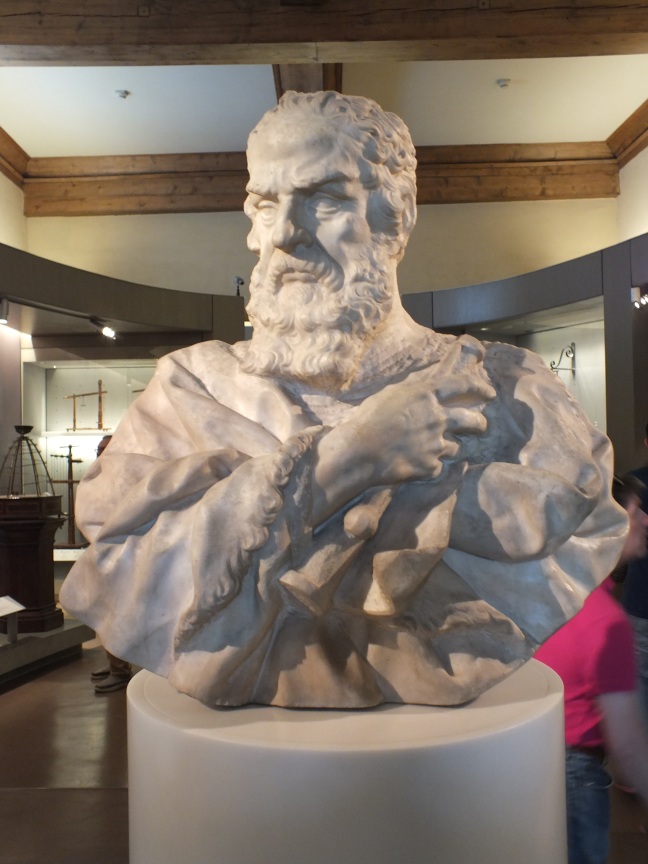 Clearly, this is no shrinking violet.

While Galileo is credited with a number of inventions and his use of scientific method, he is best remembered for his work in astronomy and his discovery of the phases of Venus and of four of the moons of Jupiter. Where he ran into trouble was with the publication of his “Dialogue Concerning the Two Chief World Systems”. In this work he offered astronomical and observational support to the Copernican theory that the Earth revolves around the sun. In the course of this presentation he appeared to attack the Pope, who took a very dim view of this theory. He was tried by the Roman Inquisition in 1633. Galileo was found “vehemently suspect of heresy”, forced to recant, and his book was banned. He spent the rest of his life under house arrest.

In the museum you will find some of his early telescopes 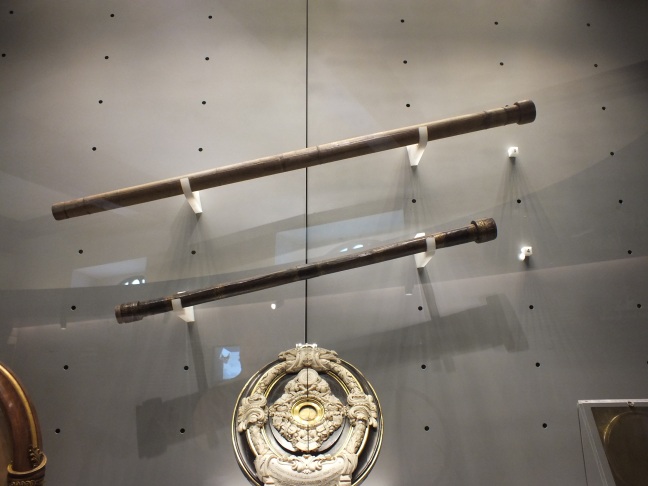 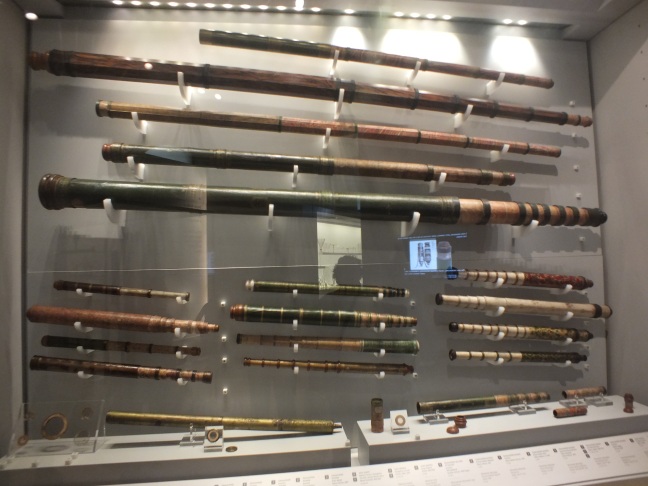 And even later improvements. 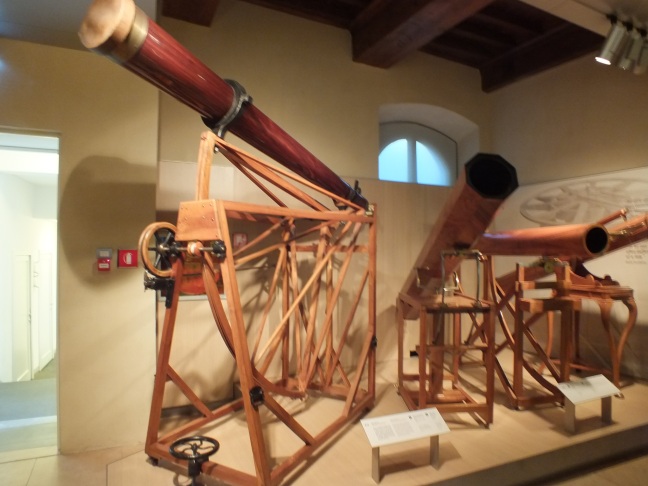 Among other scientific items on display, not having to do with Galileo, are these: 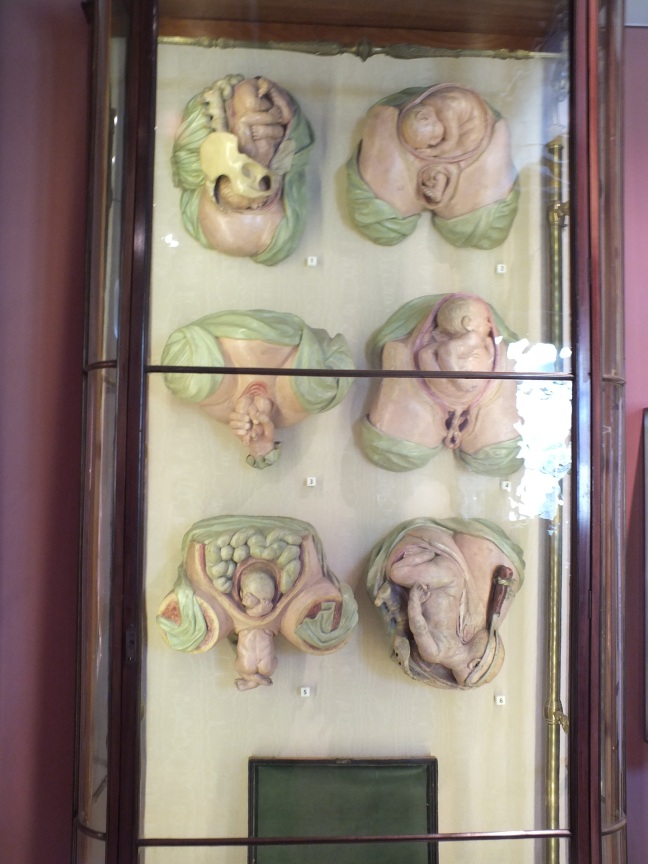 These models apparently were used to train the physicians of the day. There is another far more graphic set which I’ll keep in the vault.

One of the first things you see when you come into the museum is this incredible machine: 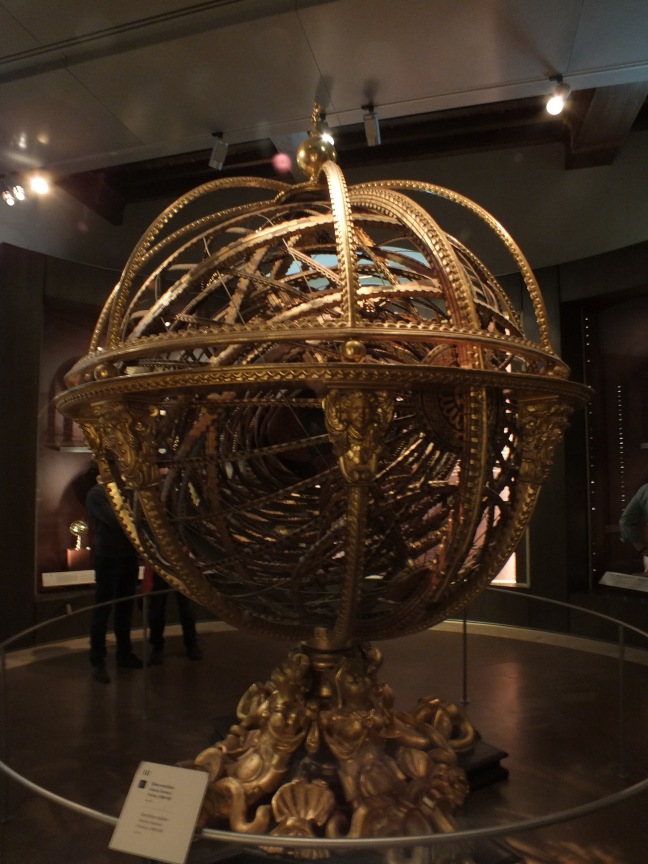 This is the Armillary Sphere of Antonio Santucci. What you cannot see in this picture is, at the very center is a globe of the Earth. All these gears, when set in motion, replicate the orbit of the planets and the sun around the earth. This was built before elliptical orbits were discovered also. It no longer works.

When Galileo died, he requested to be buried in the cathedral of Santa Croce. However, because he was still considered a heretic, the best he could get was to be stuck off in some side room. By 1737 the Church had to recognize that Galileo was right all along and so, that year he was re-buried in the main cathedral as he had requested and a statue was placed there in his honor. During the re-burial, three fingers and a tooth were removed from the body as relics. Not inappropriately, his middle finger is on display at the museum: 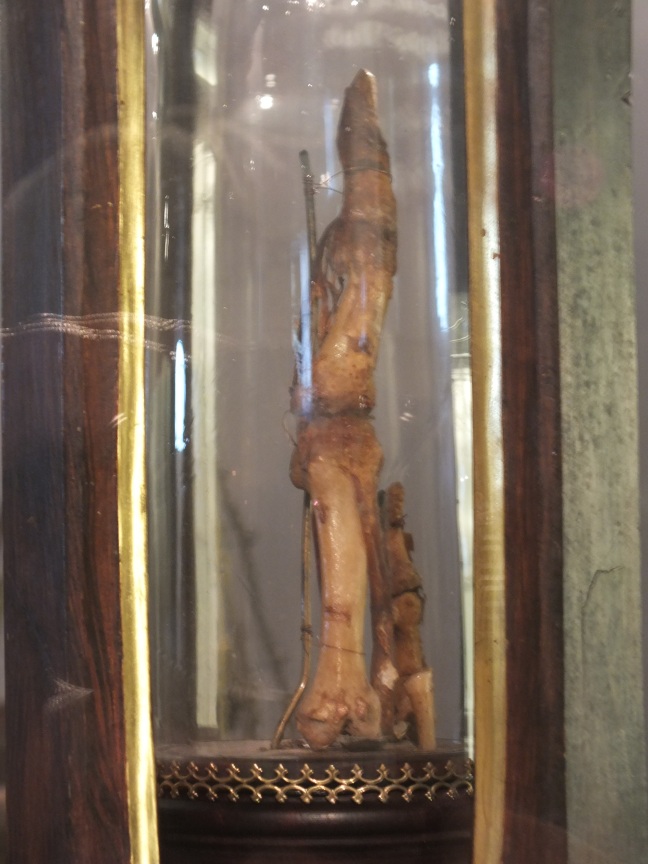 Now, for eternity, he is able to send one last message to his detractors.

Well, people, we could do on and on about Florence and we only saw a fraction of it in 3 days. But at last, it was time to leave. Which meant, it was also time to get behind the wheel and actually drive in the crazy country.

Our next destination was the Mediterranean coast, which meant that we would have to go through town on this side of the river and pick up their equivalent of an interstate. I will leave you with just a small sampling of what that was like: