Well, we wound our way our of the hills of San Gimignano and eventually found a four-lane divided highway with a sign pointing south to Siena. Siena is also a walled city, but this one is huge, home to 55,000 people. And, there are only eight places you can get in, called “Portas”. To get to our B&B, which was inside the walls, we had to find Porta Romana, on the south side. Once again the Google blue dot was a little tardy when it came to suggesting an exit and we were soon well past Siena before we figured that out. So, in a few miles we found a way to get back and the exit that looked promising. Sure enough, there was a sign for Porta Romano, which led us to a matrix of interconnecting highways, that once again had us heading south. But this time, it was only a two-lane road so turning around was quicker and easier. On our third try we spotted a tower that a sign confirmed was Porta Roma.

Here is the layout of Siena. The green area is the part that is inside the walls: 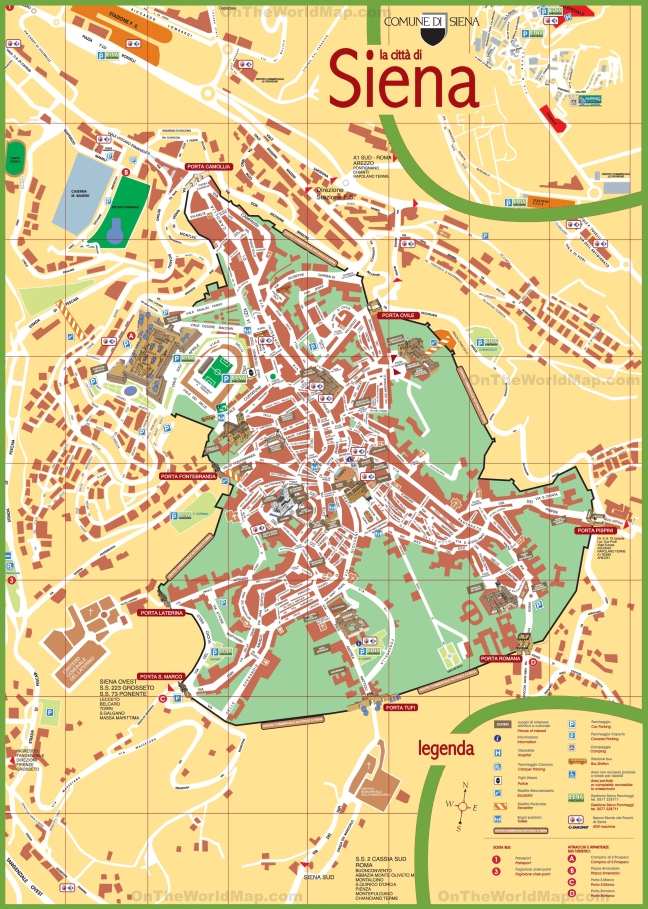 This is where we stayed. The blue X marks the spot: 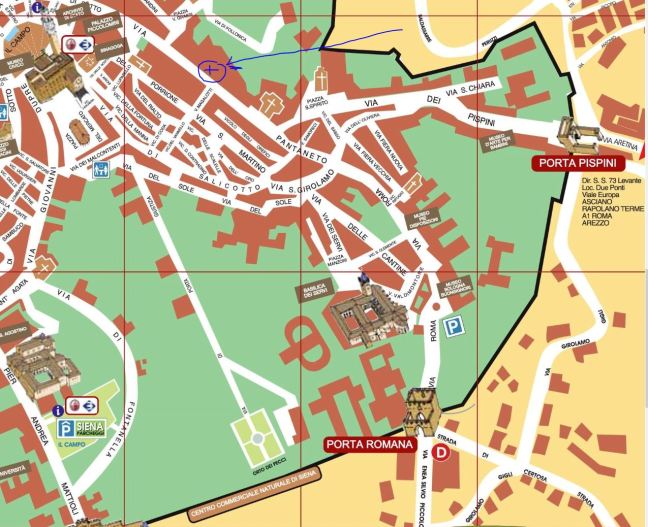 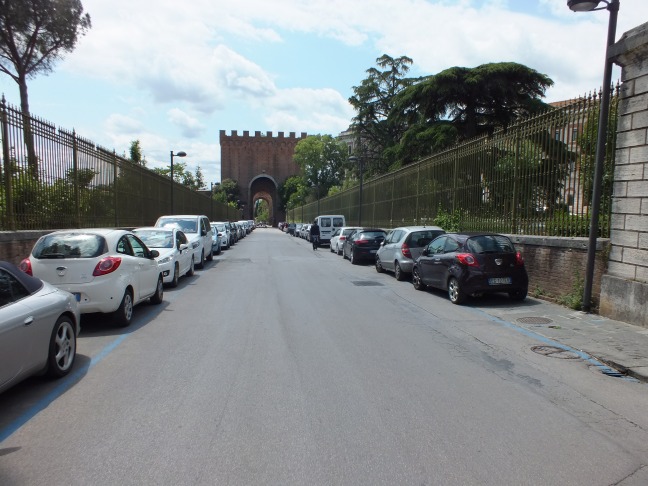 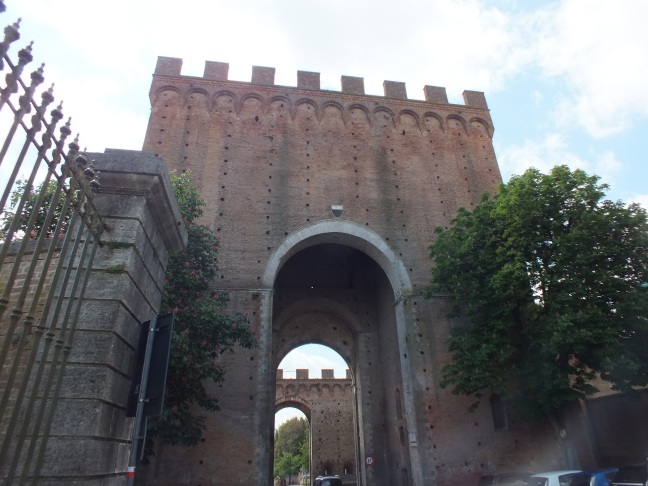 Our B&B is called Palazzo Bulgarini, located on Via Pantaneto. When we booked it, months before, the manager said to be sure to let her know the license number of our car so she could notify the police. Well, of course, I didn’t have that number at the time of booking, so on our way out of  San Gimignano I called her first to tell her we were running late, and also to give her the number. Mastery of the English language, however was not her strong suit, but after repeated attempts I discerned this bit of info: Once we got through the Porta Romana we only had to continue straight in and look for number 93. She would call the police and give them my plate number. Then, we would have a half hour to unload, turn around, and get the hell out. After 30 minutes, a ticket and/or towing might be in my future.

So, in through the tower we went. Just as she described, we saw door after door with descending numbers until, at last, we were in front of number 93: 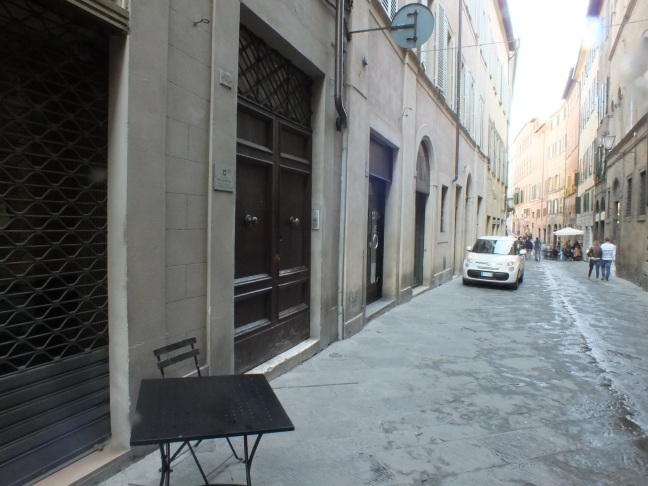 We rang the bell, the buzzer buzzed and in we went with our bags. In and up: 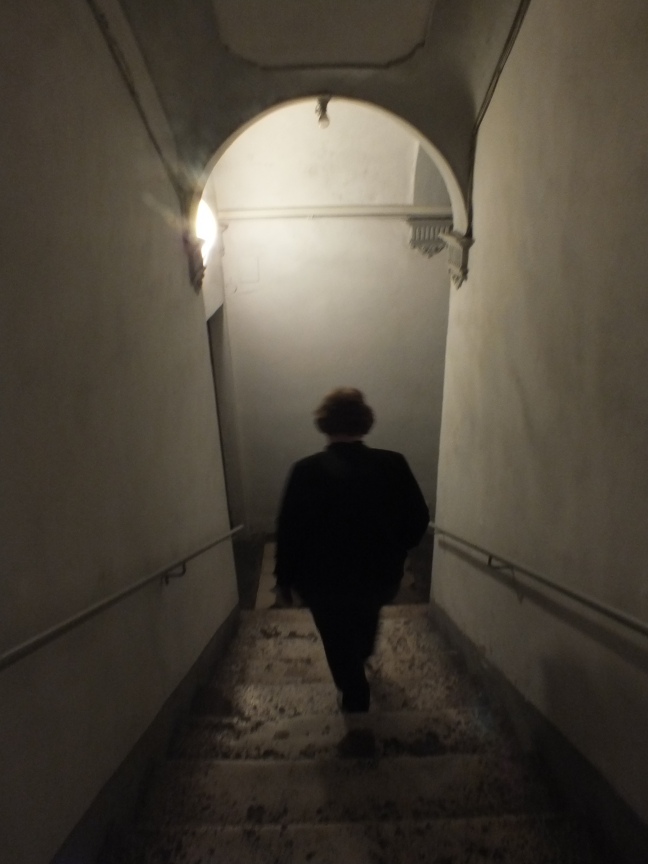 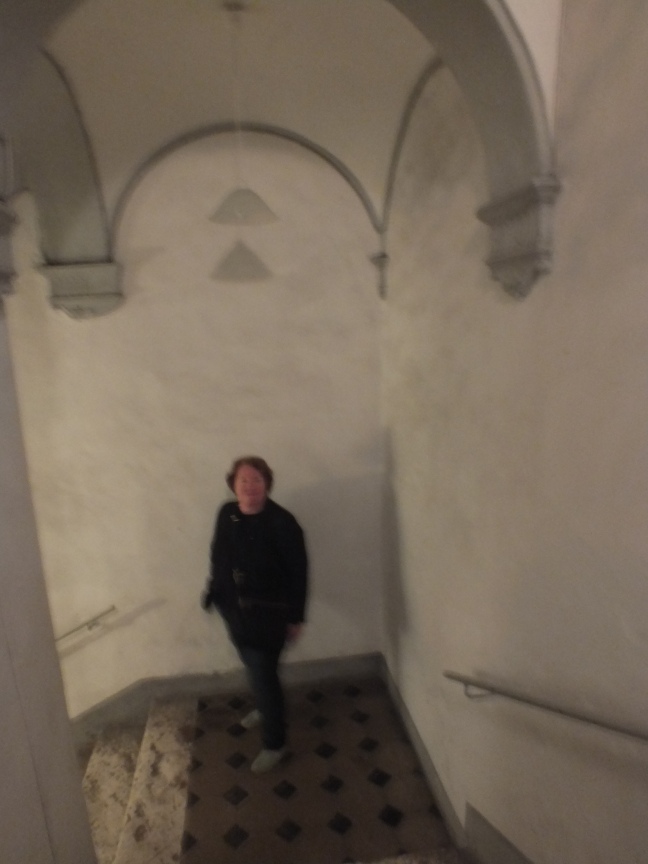 Until a door opened onto a rather compact hallway: 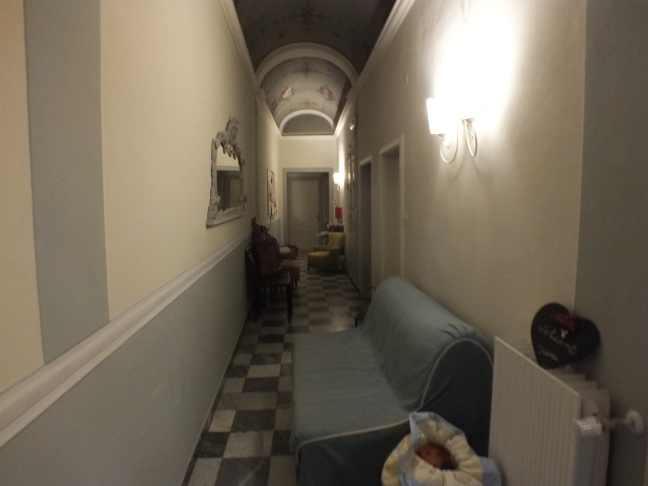 We were a little winded, having dragged our stuff up here, but realizing time was of the essence I was ready to head back down at a moment’s notice. The manager gave us a warm welcome and began checking us in. One of the first things she asked for was my license number. I told I had already given her that info on the phone. Clearly she had not called the police, which substantially increased my interest in getting back to the car. I asked her where I could park. She said to continue in the direction I had come until I came to a street on the left. Turn there and take another quick left. That would put me on the street heading back out of town. Once I got out the gate there was plenty of parking around. We finished the paperwork, Dianne started moving the bags into the room, and I beat feet back to the car.

Her directions were perfect and soon I found myself headed through the Porta and out into the civilized world. Not far from the gate, to my surprise, was a parking place with a number on it. I pulled in. But already my mind started working. Surely this could not be a free space. What was that number for? I looked around. No machine.No sign. I got out and looked at the cars behind me. They seemed to have some kind of sticker that might be a parking sticker. I didn’t like the look of things. I pulled out and kept moving.

Soon I was at an intersection, no parking space in sight. I turned left and ran parallel to the wall. Soon I was driving downhill past Porta Pispini. Not good. A few blocks from there, however, the street widened and became a road. And, not far down that road I found a bunch of cars parked along the side and one free space. I took it. 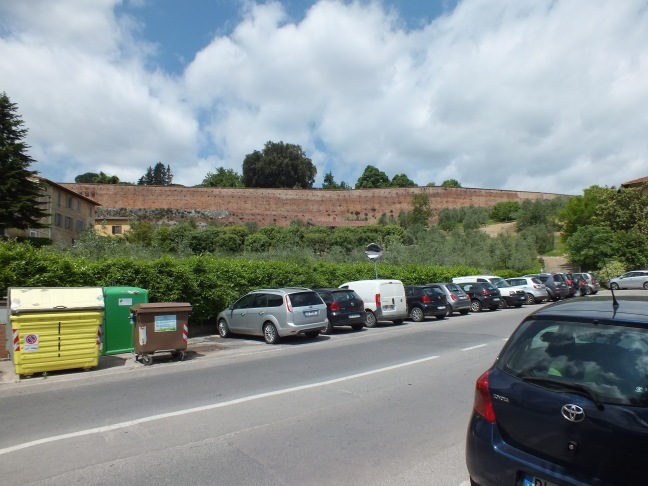 Once again, I looked at the other cars. No stickers, no nothing. I decided this was the place I would make my stand. Then I began the roughly mile and  a half uphill climb back to our room. At least it was scenic.

After an extended period of time, I made it to our room. I was eager to tell the manager exactly what I had done and to hear her say, “Good parking place”. But, by the time I got back, in the fine Italian B&B tradition, she was long gone.

I will say this, though, the room was nice: 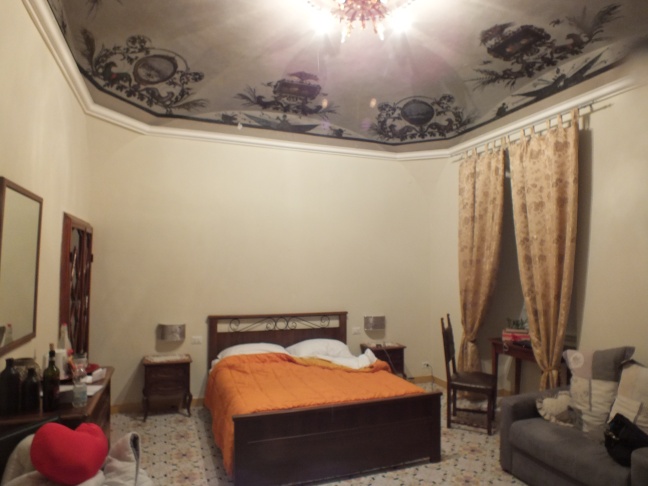 And the view out the window was quite pleasant: 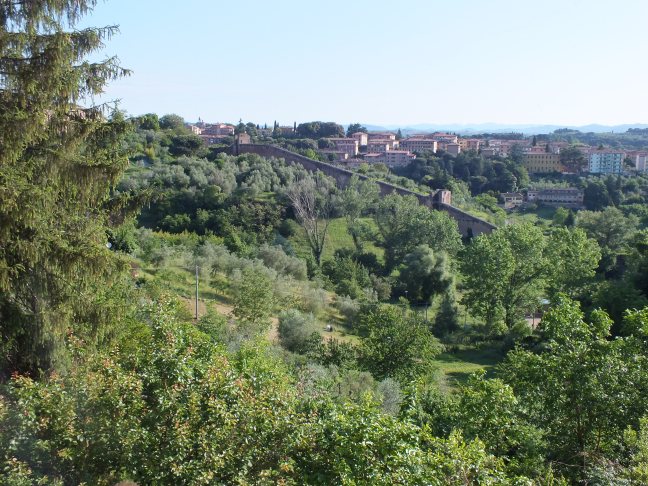 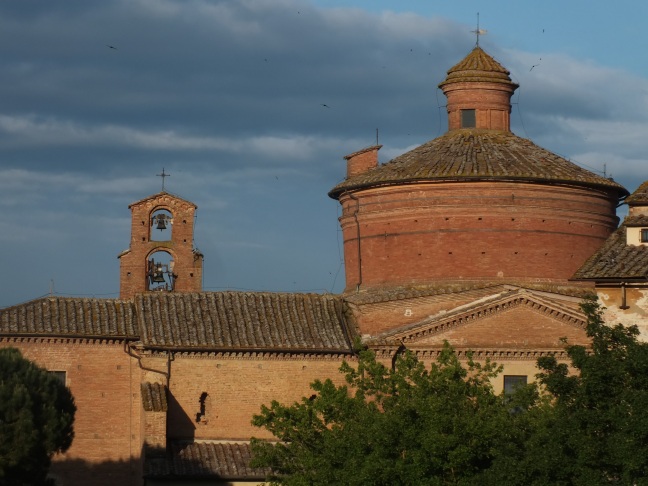 Once I regained my composure, we decided it was time to do a little exploring. We headed down Via Pantaneto. After only a few blocks we found ourselves in a huge piazza called Il Campo, the heart of the city: 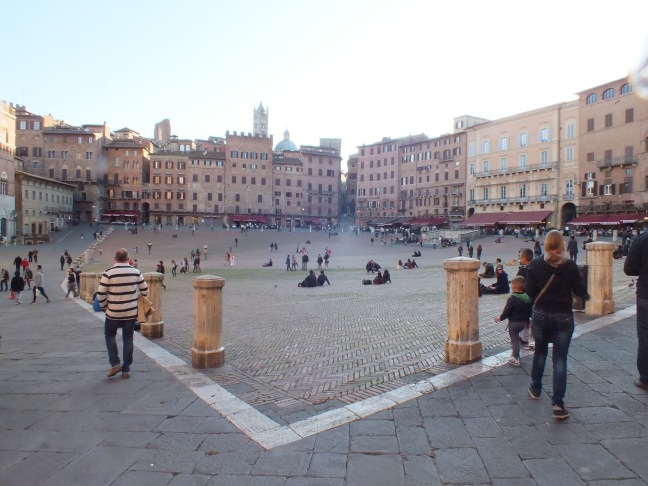 The Piazza del Campo is simply breathtaking, just like stepping back into Medieval times.

The first order of business was to get a little dinner, and, as you can see by the awnings, there is no shortage of places from which to choose. We settled on one nearby: 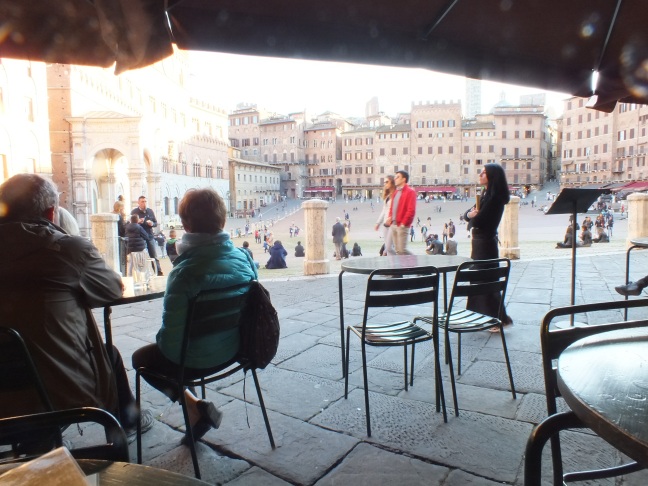 The lady in black, with the menu, is the head of sales. You encounter about 15 of them as you stroll around Il Campo. They are happy to invite you in. I won’t go into a meal by meal account of this place, but I would draw your attention to this little delight: 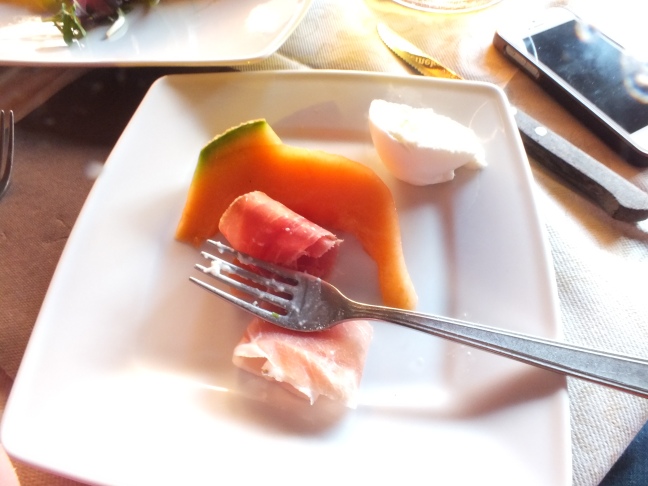 It is simply melon with a shaving of prosciutto. The two together make for a salty/sweet explosion of flavor. A little mozzarella smooths things out nicely. When we got back from Italy we served up many a helping of this over the summer. Can’t wait for melons to come back!

But, I digress. The Piazza del Campo was laid out in the fourteenth century and, in 1348 it was paved with these: 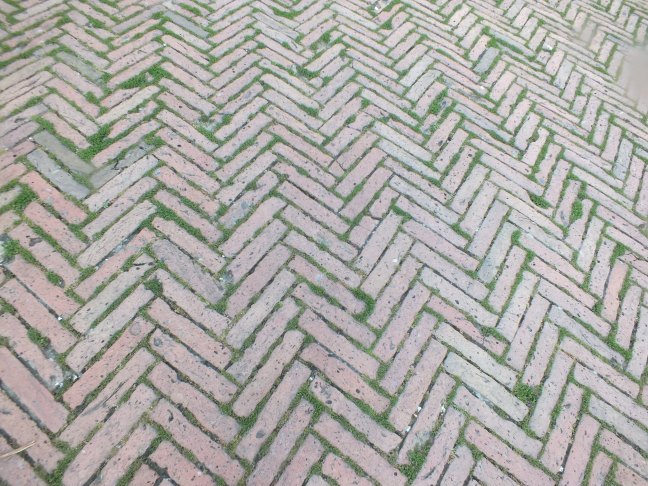 From the center, nine lines of marble radiate across the piazza signifying the families in charge at the time. . 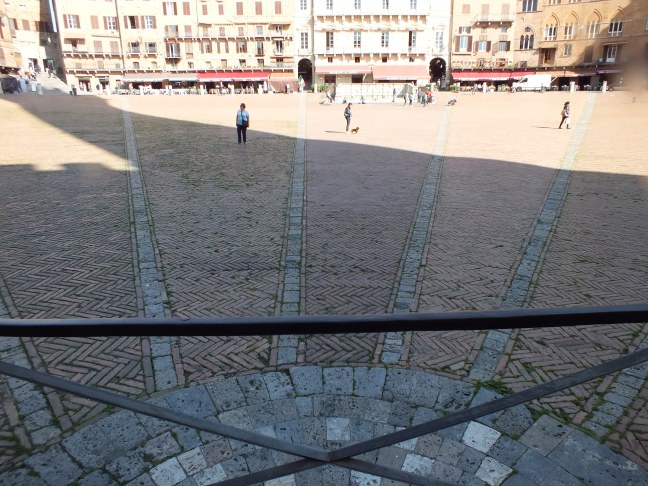 Relations between families in Siena were not so contentious as they were in San Gimignano, so nobody felt the need to build defensive towers. Instead, they chose to compete in a much classier way: The Palio de Siena.

OK, so here is how the piazza looked at the time of our visit: 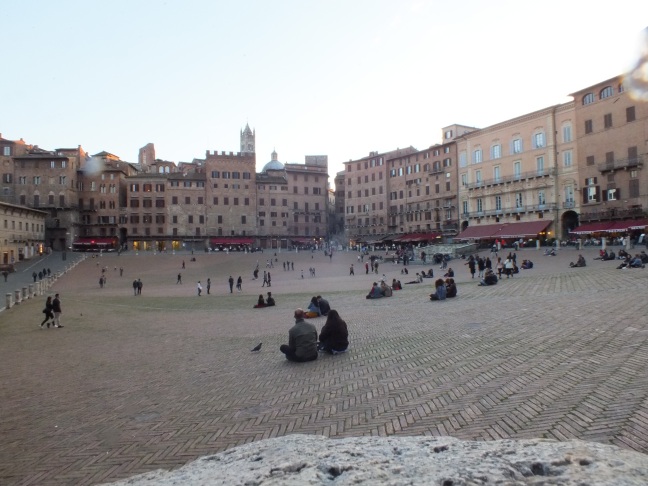 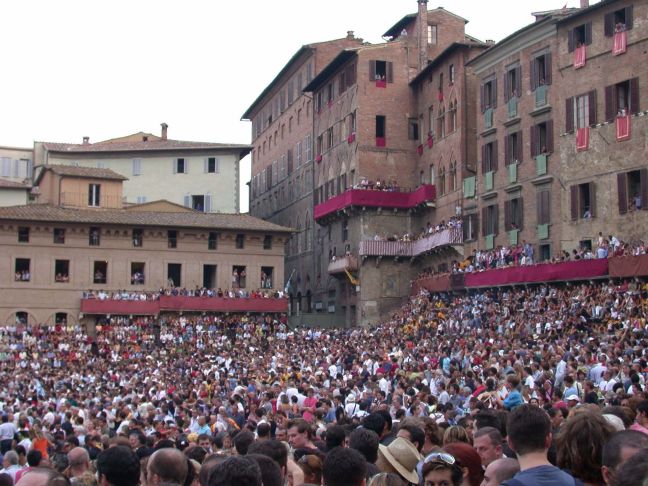 Every July 2nd and August 16th, people from all over the area and all over the world come to Siena for the Palio, which is a ten-horse race that has been run in this piazza since 1633. In Siena there are 17 Contrades, or city wards. Not surprisingly, given the history of Europe, they are bitter rivals. But, rather than kill each other, long the custom elsewhere, they settle their grievances with this horse race. Because the piazza is limited in size, they only race 10 horses, so they have developed a system for which contrades get to race at any particular Pialo. The race is run for three laps around the piazza, which takes about 90 seconds. It begins with the dropping of a rope: 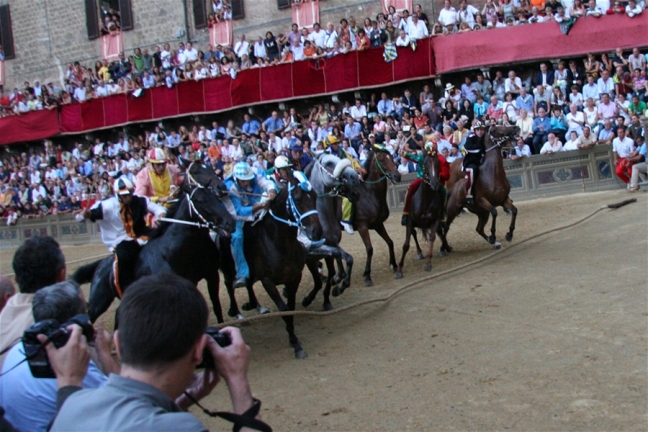 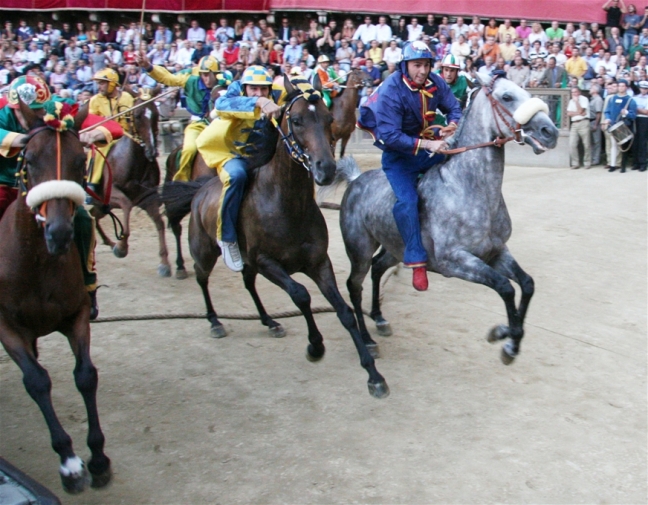 Because some of the turns are sharp and because the jockeys are wailing hell out of each other, it is not uncommon for a rider to be ejected from his mount. And some have been seriously injured. Horses have been injured as well, so recently padding, as you see on the left below, has been added to soften the blow. As you might imagine, animal rights people take a very dim view of these proceedings. 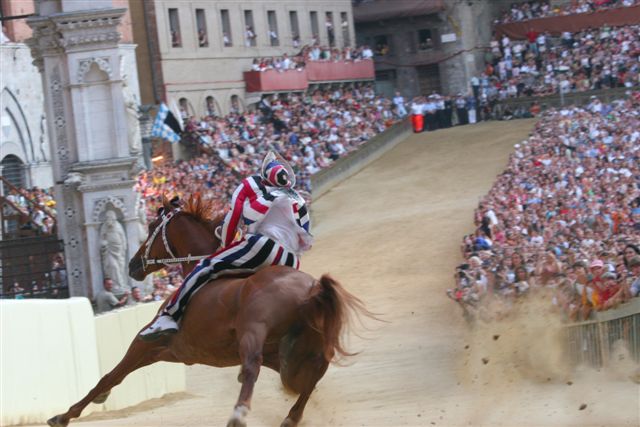 Interestingly, some horses have won the race without their rider attached, which is allowed.

We were not altogether sorry to have missed this event, given our lack of fondness for big crowds. After a very nice dinner we continued our stroll through the streets. Next, we’ll show you what we saw.