Venice began its existence as a hideout for people following the collapse of the Western Roman empire. Barbarians would come down from the north and those who occupied nearby villages would head out to the islands to escape. Then the barbarians would leave and the islanders would go back to their homes. This went on for a while, then Atilla the Hun shows up. Unlike his lightweight predecessors, Attila was all business. He burned every village and everything else in sight. However, even he didn’t feel like slogging out to the islands.

This time the islanders were fed up. Rather than going back to the mainland and re-building for the umpteenth time, they decided to stay. Only problem was, the islands were mostly marshes and the people quickly got tired of sinking into the mud every time they tried to go someplace. Then, somebody hit on the idea of driving stakes into the muck for people to walk on. Brilliant!

Many of these people were fishermen so they knew that the best, most water resistant boats were made of alder wo0d. Soon they were sending barge after barge across the Adriatic to bring back alder logs. They would then trim them to roughly fifteen feet in length and start driving them in. After they finished this they would build wooden (later stone) platforms on top and build buildings. When one of the large churches was built in the 1600’s it was recorded that it took 1,106,657 wooden stakes and two years and two months of pile driving just to build the base. Along the way, the Venetians managed to wipe out the forests of Croatia and Slovenia.

I am telling this story only because today, much of Venice is still supported by those very same stakes, now hundreds of years old. Apparently, the muck does not allow wood-eating creatures to survive.  Problem is, muck is still muck and little by little Venice is sinking. Not much. Maybe a millimeter per year. But over time it still adds up. Is that the biggest problem Venice faces? Not hardly. What is the biggest problem? Guess.

Typically Venice floods about a hundred times a year, usually from October through winter. This phenomena is called the acqua alta and is generally more of a nuisance than anything more serious. If you decided to go to Venice then, you might encounter this: 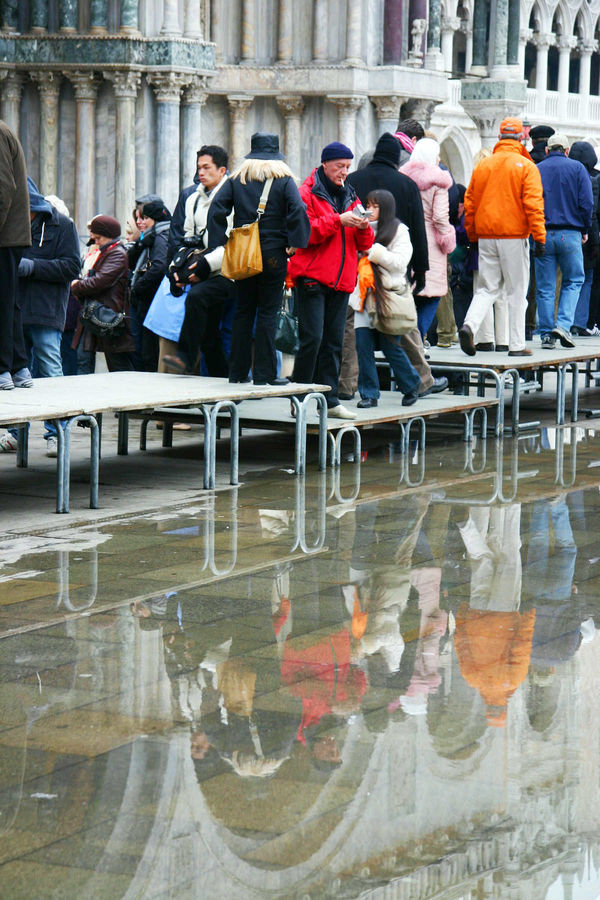 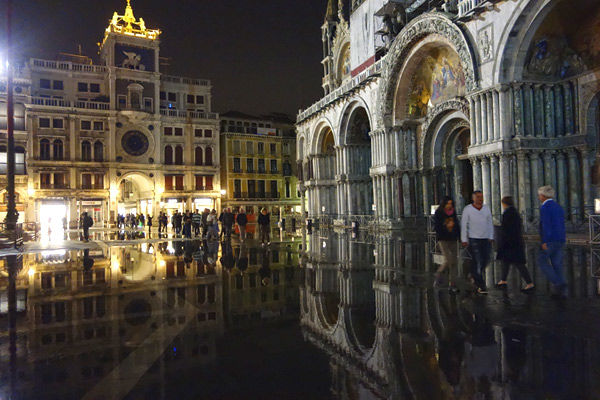 It has long been understood that Venice is a city living on borrowed time. But given the current climate it is not hard to imagine that time is running out. I suggest you move this city to the top of your wish list. Now, to change the subject.

After going through my bazillion photos I realized that I had left out of few from Saint Mark’s basilica, actually some details you see in the picture above,

If you are considering marble counter tops, what better place to look at samples?

I really can’t get enough of this place.

Often we would be late getting back to the hotel and just as often we would fail to make reservations at any restaurant. Fortunately the hotel staff would bail us out by contacting their friends to let us in. This generally led to evening strolls through the neighborhood. There are always people out, though, so safety is not a concern.

Although this street looks a little foreboding, there were lots of people behind us when I took this.

It led us to this place:

If you order meat for your pizza, sandwich or salad, they cut it fresh!

The big thing in Venice is Murano glass, which, not surprisingly, I’d never heard of. Murano is an island near Venice and tourists flock there like pigeons in a peanut factory. While we did not have time to join them, plenty of glass was available in the city proper. Here is the result of Dianne’s very deliberate and well-done shopping,

Plenty of room for these in the carry-ons!

Earlier I had mentioned the Correr Museum, which is on the opposite end of Piazza San Marco from the basilica. Here a few highlights;

This is the Doges library, all the books being leather bound.

A very fine coin collection. Each Doge, apparently, felt the need to have their reign memorialized on coins. Some obviously preferred gold.

Later in Venetian history the city became famous for the Masked Ball. Young upper-crust gentlemen would descend on the city each year from other city states with the idea of engaging in a little hanky-panky with young ladies of the area. Some of these ladies apparently were troubled by matters of stature. Well, problem solved!

And so, people, it was time to say goodbye to Venice. We were trapped like all the other tourists, but we were enchanted as well. We would gladly return. One last look out the room of our hotel,

before we made a mad dash for the front desk so they could call us a guy to move our now heavier bags across that bridge. Soon he shows up, possibly a member of the WHHS Class of ’56.

But, not only did he take all this stuff across the bridge, he took us to a secret entrance to the train station which led directly to the trains! Well worth the 20 euro!

We were sittin; at the railway station, had a ticket for our destination.Florence!

But this pretty well sums up our feeling about Venice: