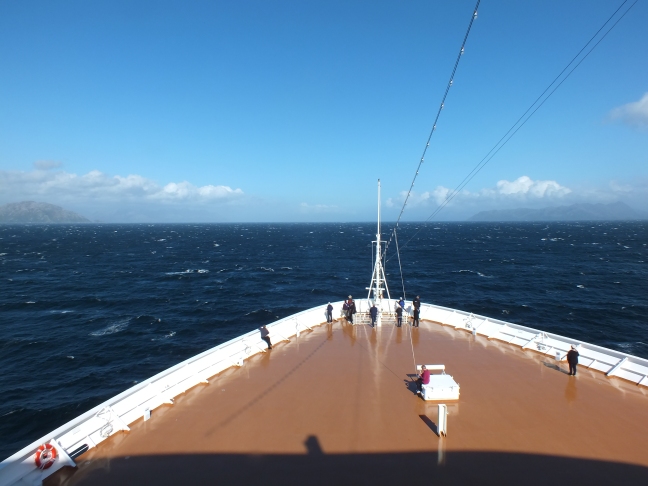 I believe it was Fred Almendinger, history teacher extraordinaire, who first introduced me to Ferdinand Magellan. It was not an introduction that I exactly treasured at the time. But times have changed and now we were about to sail the very waters that he sailed and see exactly what he saw. This was not an experience we took lightly. Here is how it began:

You will notice that the seas have gotten a little rougher. In my little boat it would have been time for a mayday broadcast. Our ship, however, couldn’t have cared less. We entered the Strait in the late afternoon and the plan was to sail through the night to Punta Arenas, our last scheduled stop in Chile. We would not see much more today, but we would see the second half tomorrow afternoon. Here is what was left: 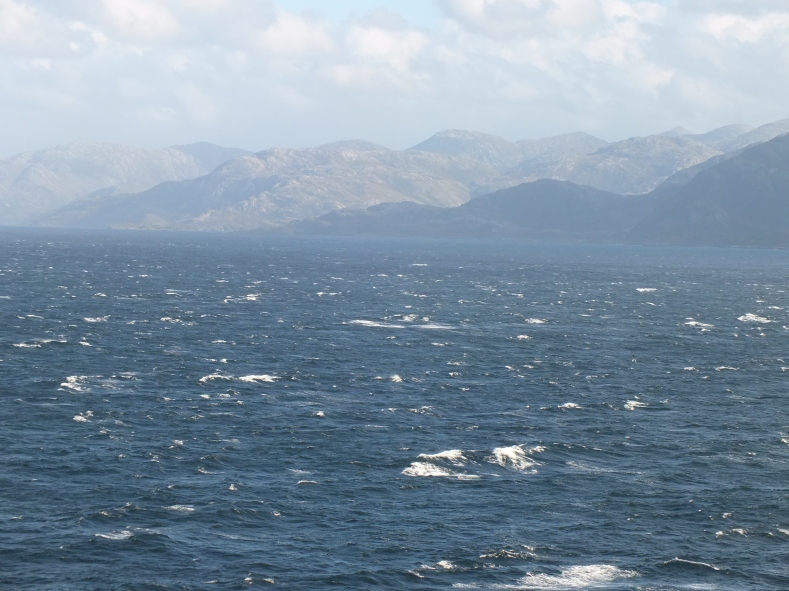 The next morning, we found ourselves anchored in beautiful Punta Arenas!

Although there are many attractive natural wonders around here, that is not what we came to see. In researching this area what we found is that there is a huge rookery of Magellanic penguins on a place called Magdalena Island, which is several miles offshore in the Strait. What I learned is, there are two ways to get to this island. One is by commercial ferry, which is a 5 hour round trip. The other is by a private boat company called Solo Expediciones.

I first looked into the ferry and discovered that the day we would be in port they would not even be sailing till 5pm. Since our ship was due to leave a 5:30, this was a no go.

I then looked into the excursion offered through Holland-America and found that what they offered was a trip to the island aboard that same ferry that left at 10 am. Well, that was long since sold out, so I called and had us put on a wait list. A list for a day I was sure would never come.

I called the ferry company directly to see if we, as just plain citizens, could get on the 10:00 run. They acted like such a run didn’t even exist.

Then I looked into Solo Expediciones . Here is a post I found in Trip Advisor:

DO NOT Recommend this trip at all

On January 7th we took the trip to isla Magdalena with Solo Expediciones. There were a lot of people that seemed to be unaccounted for, they arrived there without reservations.
We got on the vans that took us to port, and the boat that was there to take us to the island didn’t look anything like the one on the pictures. There was also an extra boat that was very small where they put the rest of the people who didn’t fit on the bigger yellow one.
It was a RIB (Rigid inflatable boat) that seemed a little dodgy. they filled the boat with about 40 people and we all put life vests on which is completely understandable.
The trip to the island was about 45 minutes but the people inside were very scared cause 2 – 4meter (6 to 12 feet) waves were crashing on the boat and completely covering it every few seconds. There were no emergency exits or anything, it felt pretty unsafe, but finally we made it to Magdalena Island.
The penguins were great, it was very windy but its something no one could do anything about of course. We were on the island for about 40 minutes.

The Problem Started On Our Way Back.

First. They Told Us We Were Not Going To The Sea Wolves Island Which Was Also Understandable Because Of Weather Conditions.

Then My Family Had To Go On The Small Boat, Which I Think Is Only Used When They Have More People Than Expected, And Don’t Turn Down For Safety Reasons.

The Way Back, The Weather Wasnt Improving, And The Captain Told Us Not To Worry, We Were Gonna Be Back In 50 Mins One Hour Tops. But It Was 3 Hours

The Worst 3 Hours Of My Life.

Huge Waves Were Coming At Us, And It Was Looking Like The Boat Was Going To Turn Over Or Sink At Any Minute.

The Captain Had To Get Away From The Shore So He Could Try To Approach The Port From A Different Angle. The Strength Of The Wind And The Waves Wouldnt Let Us Any Closer To The Dock.

The Big Boat Passed Us And Didnt Wait For Us To Follow, Or Even Try To See What Was Going On.
The Captain Kept Saying It Would Be Only 20 More Minutes, But It Was Way More Than That.
Everyone In The Boat Was Really Worried, An Old Lady Was Almost Fainted And The Other Passengers Were All Getting Sea Sick.

Waves Kept Coming And My Family And I Even Started Praying And Thought I Would Have To Swim In A 3ªC Almos Frozen Ocean, Which Is Obviously Impossible.

We Were Worried That Gas Would Run Out Because If They Had Calculated 45 Minutes, 3 Hours Was Way Out Of Hand.

The Captain Seemed Nervous And Also Worried But Woulndt Say Anything In English Or In Spanish.

After 3 Times More The Estimated Time Of Getting Back, We Finally Got To Port.

But It Was Definitely Not Worth Risking Our Lives Or At Least That Is What It Seemed Like Just To See Some Penguins For 40 Minutes.

Definitely Not Recommended Or Worth The Money. Even If Some One Payed Me I Wouldn’t Go Again.

Well, even though, as is always the case on Trip Advisor, there were many other posts saying what a wonderful time they had, this one could hardly be ignored. It looked like we would not be seeing any penguins after all.

But, when all seemed lost, an ad appeared from a company called Viator on Trip Advisor offering a trip to Magdalena Island leaving at 10 am. They were charging $145 USD’s per, but that was still cheaper than Holland-America. I booked it instantly and cancelled our forlorn position on the wait list. I received an e-mail directing us to report to an address just a couple blocks from the dock. We were in business!

We actually arrived at the dock about an hour early for a change, and soon we found an internet cafe’.

This was one of only two times we communicated with our peeps in three weeks. And, the internet was all in Spanish and we could not find a way to switch even Google to English. The 16 year old who ran place didn’t hable Englais and certainly didn’t care to engage in our usual sign language. Still, we managed.

After we struggled for an hour, we headed for the address we had been given:

Well, well, well. Turns out Viator is merely a broker for services already in place. And, we paid $145 per for what we could have gotten for $88 on our own if we had EVER intended to call them which we certainly HAD NOT! And yet, here we were. It came down to penguins or no penguins. The deciding factor was the weather forecast we had received from the ship, which called for light winds all day. OK. Penguins it is. Soon we were zippin’ down the highway. 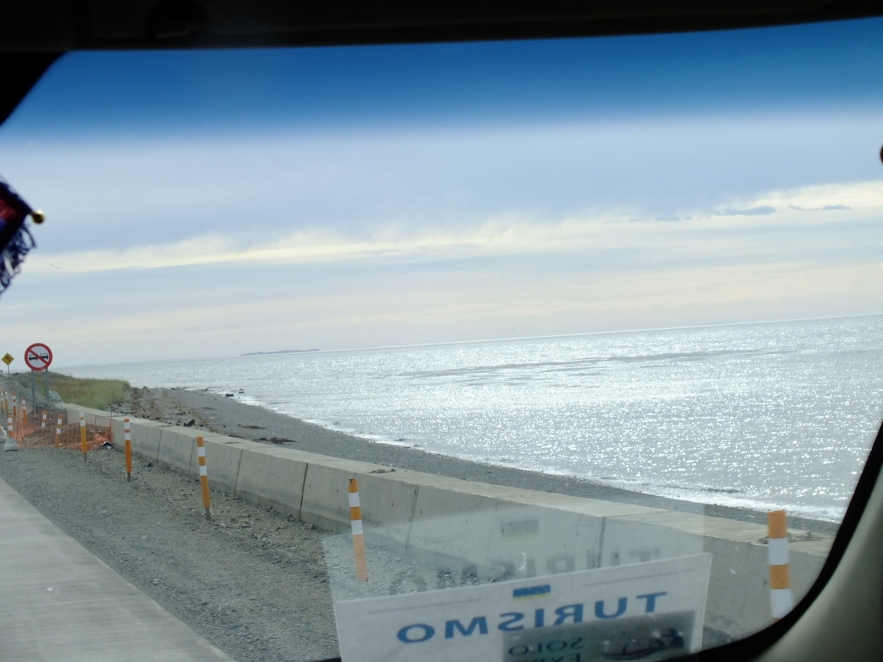 Alright, let’s start looking on the bright side. For one thing, these guys have a dock much nearer to the island. That means instead of a two hour ferry ride, we have a 45 minute boat ride. Of course, the ferry ride is the one that offers a much better probability of return, that is, of returning alive. It all came down to this simple question: WWMD? What would Magellan do?

I saw no particular reason to bring up the subject to the missus that we were booked with the company in the bad review. She read it, too. And, she could see the calm seas behind us. Everything was looking up!

Then our boat pulled in:

Dang! We didn’t even get the bigger boat. I carefully grilled the people coming off. They all said they had a great time. So, in we go! 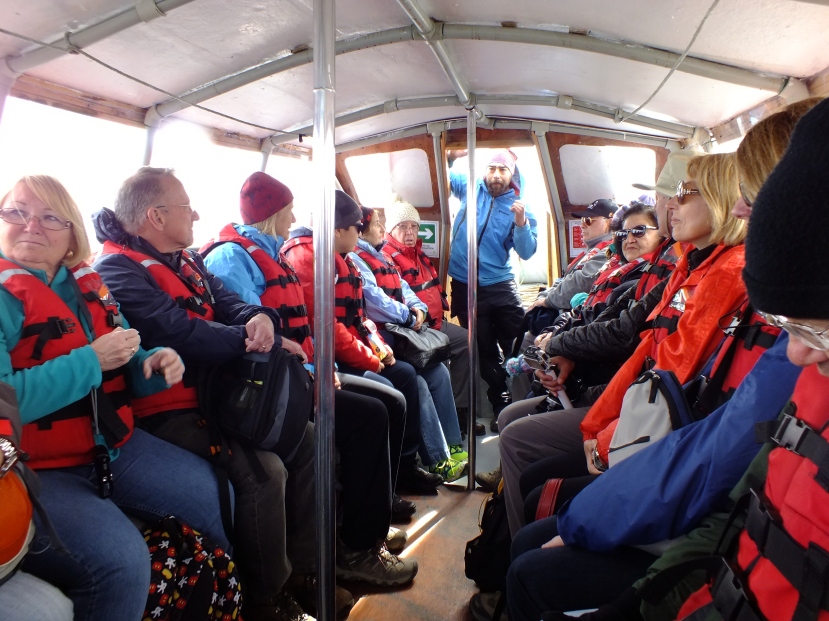 You mariners will note a few things, that is, in addition to the life jackts: First, the homemade roof is supported by PVC pipe. Second, the exit looks just a little tiny. There is a larger one in back, but not much larger. And, last but not least, the gentleman at the end was one of two crew on board. I presume it must have been Casual Friday in the Chilean maritime trades. Clearly this guy and the captain had been to sea quite a few times, and, no doubt on both sea and land they knew something about survival. Who better to take us out on one of the most dangerous bodies of water in the world? WWMD? He’d say full speed ahead! And, that’s what we did:

Although it didn’t seem like 45 minutes (actually it seemed quite a bit longer) we soon found ourselves pulling up, first, to Isla Marta, which is a nature preserve. We couldn’t get off the boat (although we all really kind of wanted to for reasons other than bird watching), but to his credit, our captain took us right up to the shore. Here is what we found: 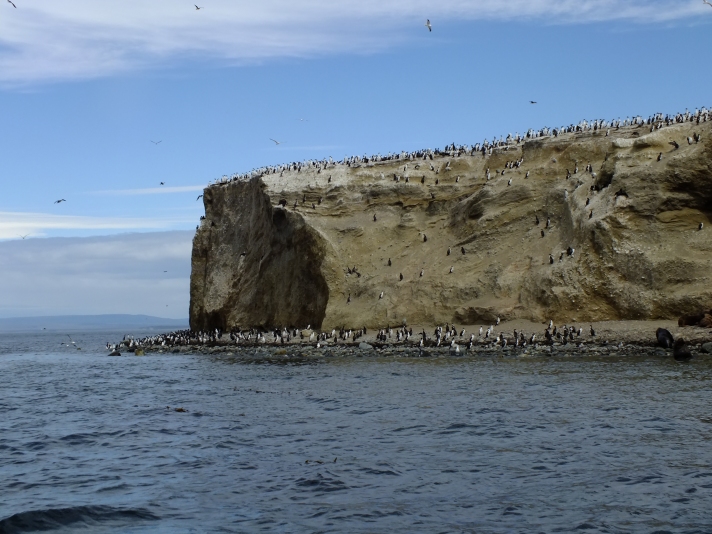 Cormorants were everywhere! And, they were quite vocal about their new visitors!

But they weren’t the only ones! There were sea lions all over the place! 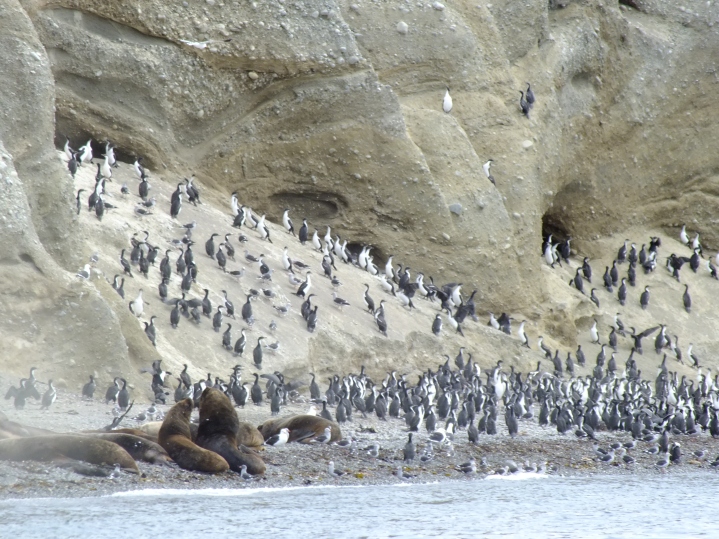 Although they look like penguins from a distance, all that goes away when they start to fly.

Clearly these guys have found a happy home. 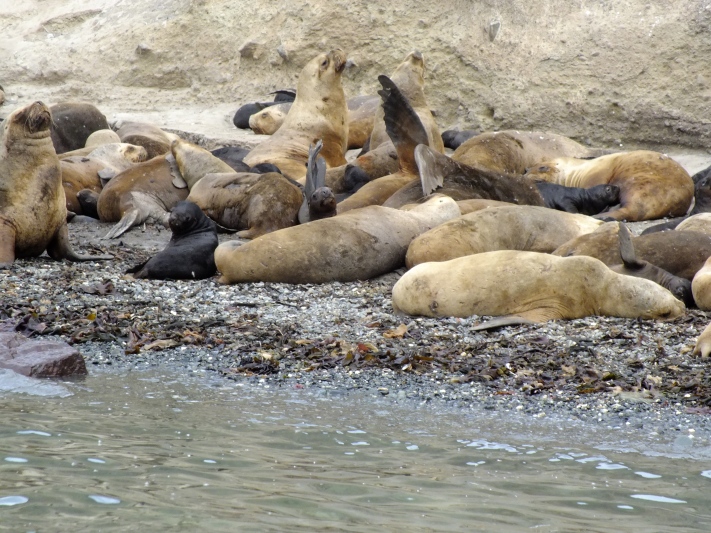 And the livin’ is easy.

But when the boss starts barkin’, it’s time to shape up!

Next, we’ll visit the penguins!