We juggled our schedule around to avoid the effects of another day of train strikes. Our destination was Versailles, which is about an hour train ride. Unfortunately, that route is run by the regional railway, RER, and not the Metro. It is the RER that is on strike. Which is not to say the RER doesn’t run on strike days. It’s just that there are fewer trains spaced farther apart. We decided not to chance getting stuck out there, so we chose another day.

But, in our usual fashion, we were late. On top of that, there was some kind of disturbance going on in the hood. When I went out for my morning trip to the boulangerie I saw a woman tying these ribbons to an air vent on the sidewalk:

Other, similar ribbons were stretched across parking spaces on Avenue D’Italie that read something like “Crime Scene-Do Not Cross”.  By this time we managed to get out of the apartment we observed, off in the distance, a protest: 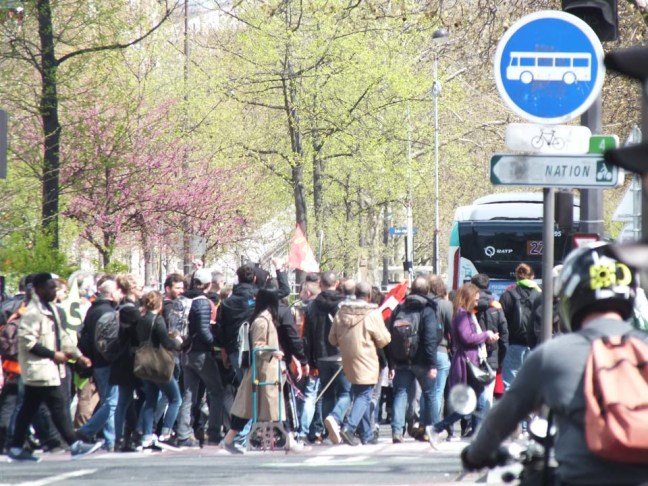 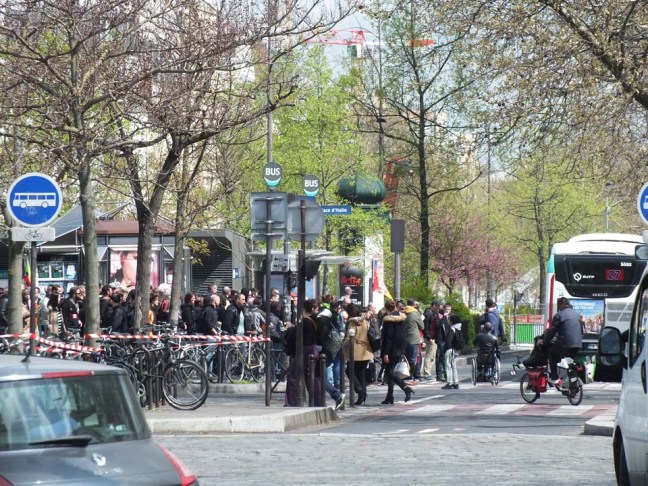 Probably this was a demonstration by students and their supporters against tuition costs and some other issues. There were demonstrations and strikes all over France on any given day. This one was peaceful.

To get to our train station you go past the front of the mall:

Unlike many American malls this one is on three floors and is always busy. Across the street is the Metro hub. We had to take the Metro to the Champs de Mars station to pick up the RER to Versailles.

To get from Paris to Versailles, the train makes a number of stops, the final destination being the Versailles Rive Gauche station.  But, as we entered the city of Versailles the train pulled to a stop at another station called Chantiers. We sat there and waited to go to Rive Gauche. Then somebody outside knocked on our window and said something in French. We smiled and waved back, but unease started to settle in. Then another kind soul tapped on the window and, in English, said, “Last stop!” We scrambled off the train to try to figure out where the hell we were.

At the station they told us the Chateau was only a twenty minute walk and directed us to go over a temporary bridge.

Then go down a walkway: 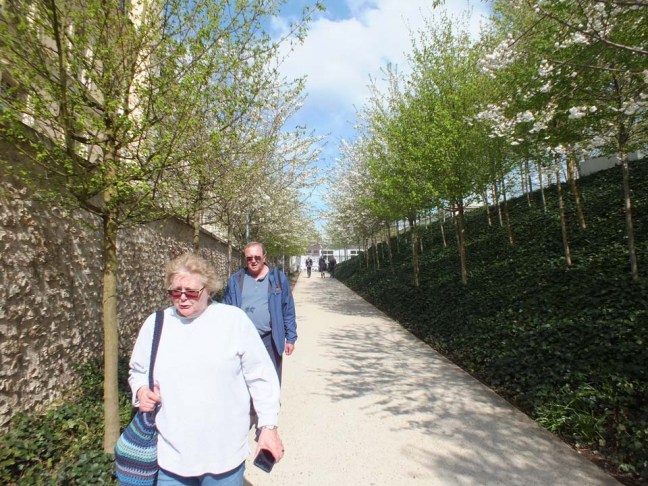 And finally, down Avenue Nepveu to the Chateau. We found it necessary to take a few breaks:

At last we were in the purview of  The Sun King himself, Louis XIV:

The only problem was, that by the time we had gotten this far it was now a little before five-o’clock and in the off season, that’s when this place closes. Fortunately, the hours changed a few days earlier and they now close at six. Well, we knew going in that we would not be traipsing over the many square miles of the grounds and gardens. So, we set our sights on the famous Hall of Mirrors and anything else we saw along the way would be gravy.

When we got our tickets we made sure we wouldn’t miss the last train out. A lady at the sales office had an up-to-date schedule and told us there would be several trains for us to take after closing time. Off we went:

The last picture above is where the entrance is. You start out in this pleasant reception area:

Go up the stairs and then you work your way through room after gorgeous room: 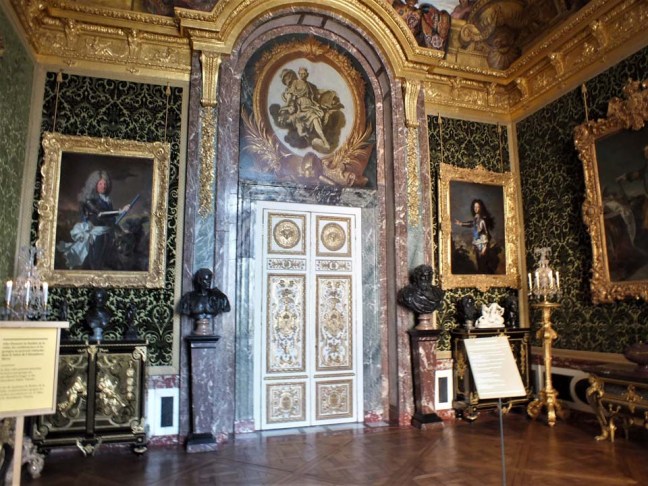 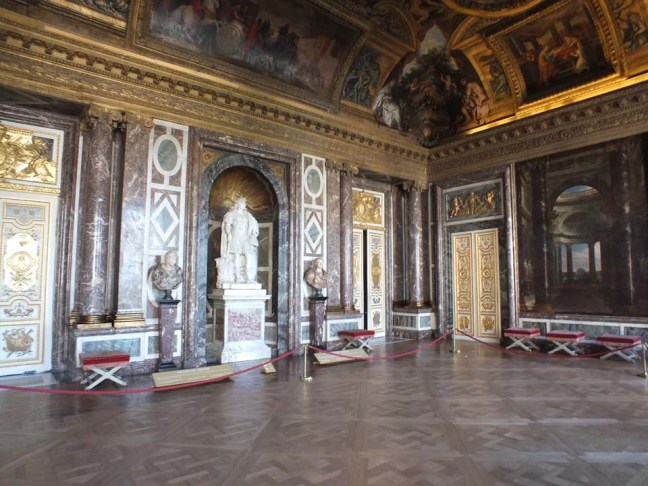 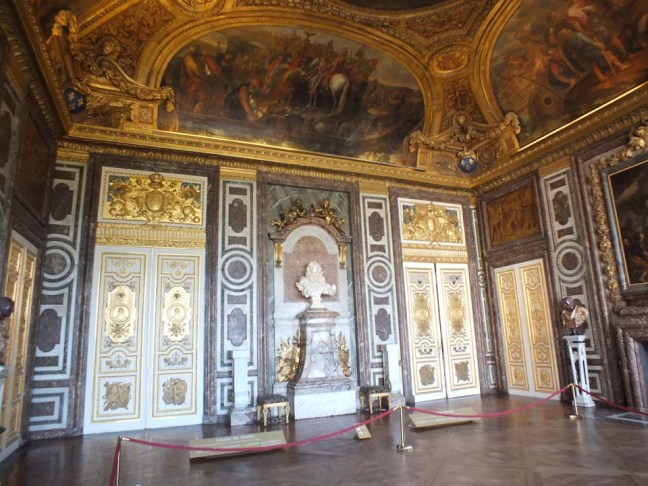 If you get tired of looking at all the stuff inside, and who wouldn’t, you can always go out on one of the balconies. It’s good to be king!

Finally, the entrance to the Hall of Mirrors!

And then, the Hall itself: 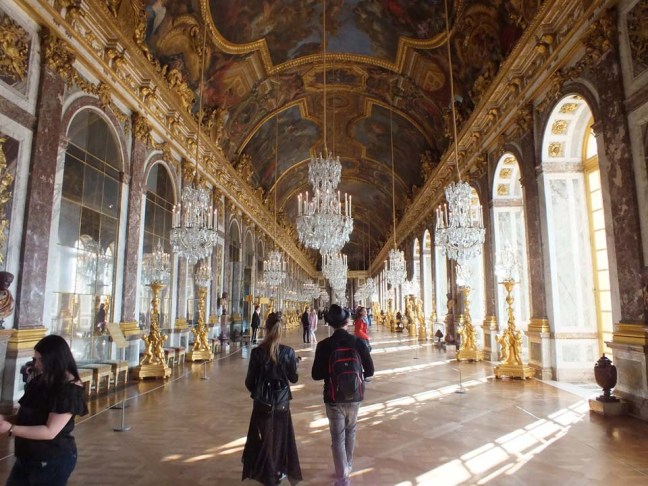 When Louis XIV built the place, he insisted that everything be accomplished with French laborers. Unfortunately, nobody in France at that time knew how to make mirrors. That, apparently, was a skill set only to be found in Venice, which, back then,  was a country, not a city. Louis had his people go down there and “persuade” a few of the mirror-making artisans to re-locate to France. When they found out about it, the Venetian authorities were none too pleased. So, they made arrangements to have the traitors assassinated.  Still, the mirrors were somehow made. 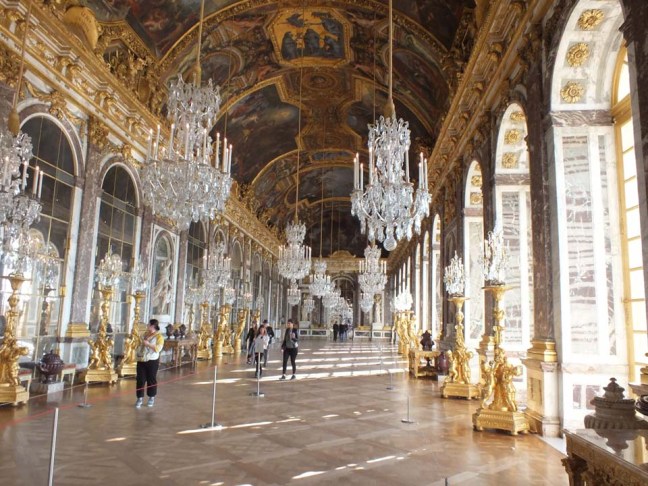 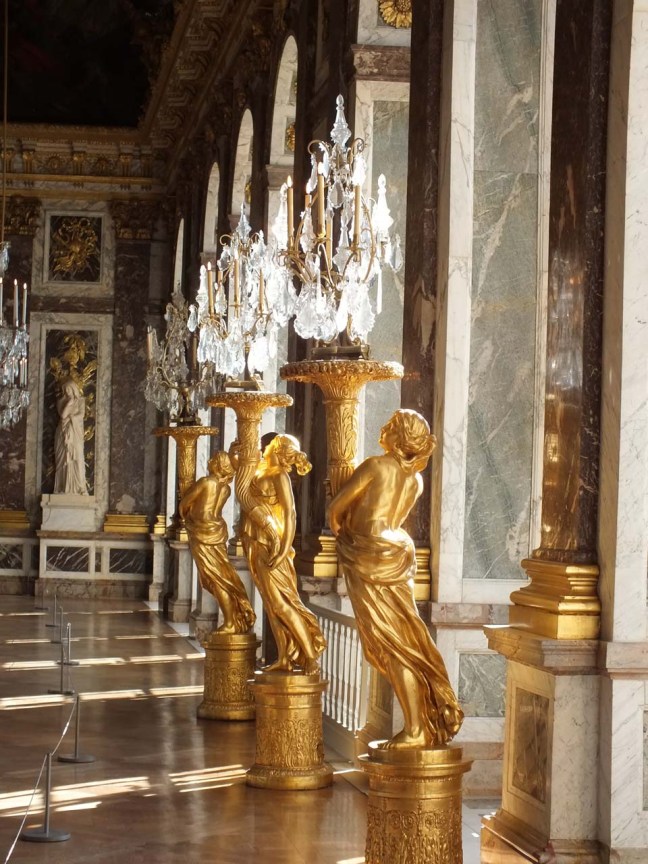 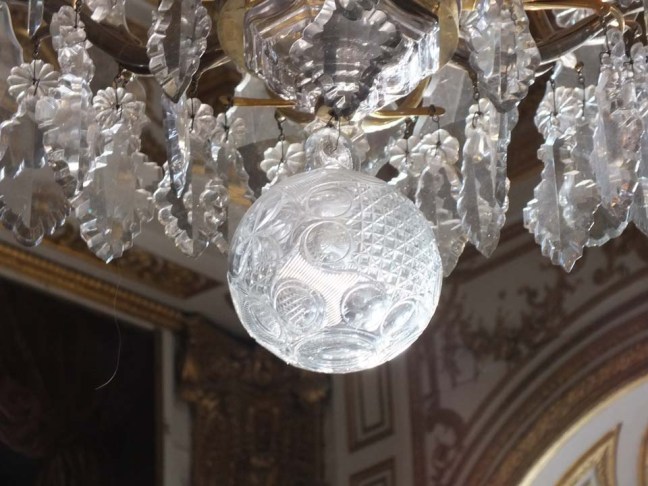 Those interested in long hikes are welcome to stroll the grounds, which extend well beyond the farthest stretch of water seen below. It also includes at least two other Chateau, one built for the king to escape the pressures of office and the other built by Marie Antoinette, to simulate the simple life of peasants. Unfortunately, not too many peasants were enjoying their simple lives, as she would later discover.

I would be remiss if I were to leave the Hall of Mirrors without bringing up one of most famous uses of this room, the signing of the Treaty of Versailles:

This was the treaty, the most important of several, that concluded The War to End All Wars. Key among the provisions of the Treaty were The War Guilt clause requiring Germany to admit to having caused the war, and, more importantly, the reparations clause which required Germany to make restitution for all the damage done during the war, calculated to have been $33 billion (or $2.3 trillion in today’s dollars.) This, of course ruined the German economy throughout the Roaring Twenties. Had any of the signatories of the Treaty of Versailles actually looked into any of those mirrors they would have seen the faces of the people who guaranteed the rise of fascism among the demoralized German public, the rise of Hitler and the slaughter of millions of their children and grand-children. Who knew?

After leaving the Hall we found our way through several more chintzy rooms:

Last, but not least, we found our way into the king’s bedchamber. I think the thing I found most distressing is how similar it is to my own: 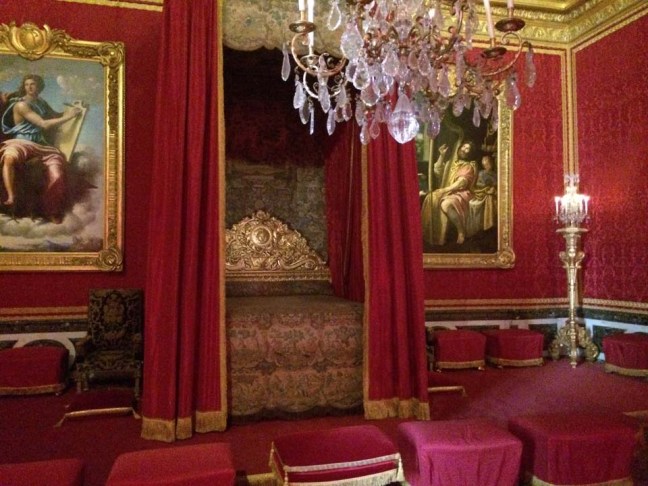 As we left the boudoir, we observed from the staff the universal language of tapping one’s watch, so we worked our way to the exit.  We walked the much shorter distance to the Rive Gauche station only to discover that is was closed for the day, which is why we got mixed up on the trip in. We guessed the closure had something to do with the strike, a more subtle way to remind John Q Public of their grievances. So, we resumed the long slog back to Chantiers, only a few cartwheels distant for the young and fit. For us, it was like hiking the Appalachian Trail.