I was down to my last few CUCs when Pedro dropped us off at the Arms Plaza. I used all but two of them to buy cigars for my friends back home. No problemo. I had enough USD’s to convert. I would simply head for the bank a couple blocks from our place and exchange them. Except, by the time I got to said bank, it was closed. Soon we were headed up Obrapia Street, where someone told us a bank would still be open. It was not.

The bank guard there told us there was a currency exchange a few blocks over. We went there. One look at the sad faces of those leaving told us something was not right. I approached the entrance window. The lady pointed to a large seated crowd of weary, forlorn tourists and said, “Dos horas”. Uh, two hours? No thanks.

Here is why I love TripAdvisor.  In their forums is all kinds of advice for sticky situations. In this case, the advice was to exchange currency at a hotel if all other options fail. We left this ship of the damned and soon found a very nice hotel and a clerk more than happy to see those USD’s. I ended up getting a better rate than at the bank.

So, now that I was solvent once again, it was time for some dinner.We headed back down Obrapia: 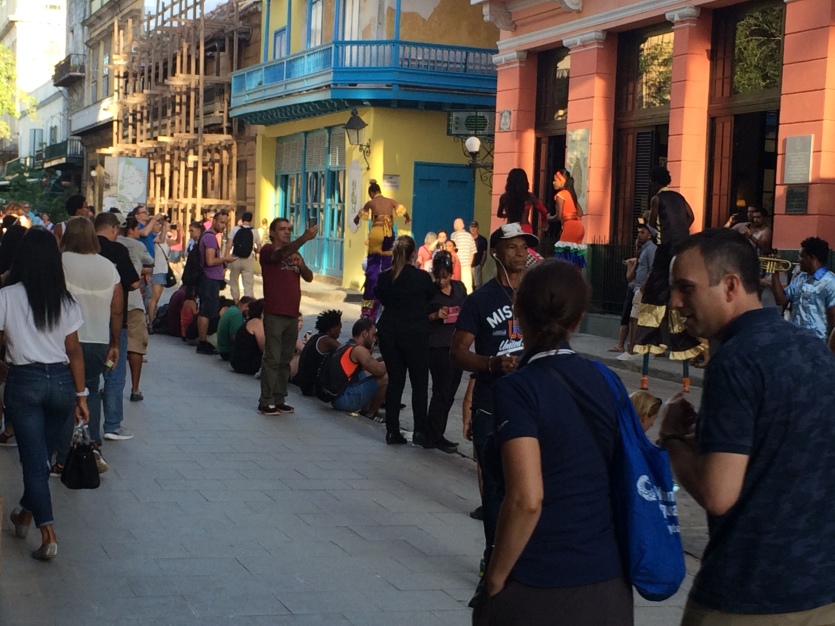 We had passed a number of places with outside dining and finally found one that looked appealing. We thought we would celebrate our last night in Cuba with a nice $8 tenderloin. We were quickly advised they were out. John settled on a lesser cut. I decided to go for the pasta. It didn’t take long to realize we had picked the wrong place: 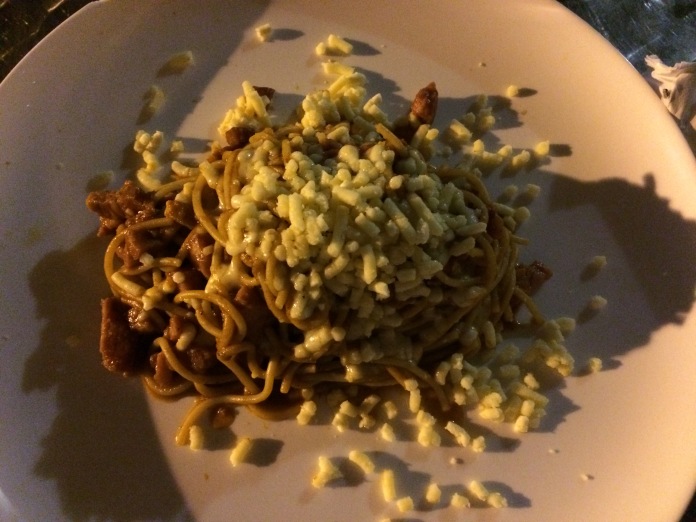 That squiggly stuff on top is some kind of cheese. Sort of like Swiss. But not. John’s steak was not much better. How we missed Yelp!

In our younger days we might have taken advantage of our last night in Havana to party into the wee hours. But, considering that we would be leaving for the airport at 7:30 am and that our whirlwind three days had more than taken their toll, we decided instead to head for the Cathedral Plaza, light up a cigar and toast the city. It was a beautiful night.

I will say this about traveling with John Starr: In addition to his sparkling sense of humor, this is a guy who appreciates adventure and who has the rare ability to stay cool when situations arise that others might find, shall we say, unnerving. And how fine it is to meet such an old friend later, not to talk about the good old days, but but about what just happened. It is something rare in my experience.

When you visit a country whose leaders have hated your own country’s everlovin’ guts for more than a half century, you want to make sure all “i”s are dotted and”t”s are crossed before you get there. But even more important than getting into such a country is getting out.  Once again, TripAdvisor’s forum offered considerable reassurance, as many described how easy the process was.

So, all paper’s complete and readily available, we were ready to go by 6:30am. Our hostess made it clear that her customary luxurious breakfast would not be available at that hour, but she did have coffee ready, which was the critical issue. We had just been seated when she came in to advise us that our taxi to take us to the airport was already here. I went down with my Anywhere Cuba itinerary in hand and pointed out 7:30 to the driver. No problemo! Take your time. Well, we didn’t need much. The owner and her daughter helped us with our bags and soon we were waving goodbye and heading east.

There were no stops this time. We made it to the airport before 10 for a 1 pm flight. We pulled our bags into the main entrance of Maximo Gomez airport and looked to the right. There, lined up in front of maybe 5 or 6 all-purpose computer screens was a crowd of bleary-eyed lost souls waiting to be checked in. The room was about the size of a basketball court. Once again, TripAdvisor came to rescue. Just before we left, there was a post regarding the airport at Varadero, which reported that for 30 CUC’s you could buy VIP status at the airport to get out of the long lines.

Sure enough, directly ahead was a kiosk. They were selling something else, I forget what, but I went to the lady in charge and just said “VIP?” She said, “Wait a minute.” and off she goes. Soon she returns with a very professional looking woman who is holding a sign that read “VIP”. She confirmed the price and asked if we were interested. We both quickly agreed. In a twinkling she was escorting us past the soulless eyes of the throng, directly to a clerk sitting behind a computer screen. This was the line we had to pass through.The people in the background were doing something else: 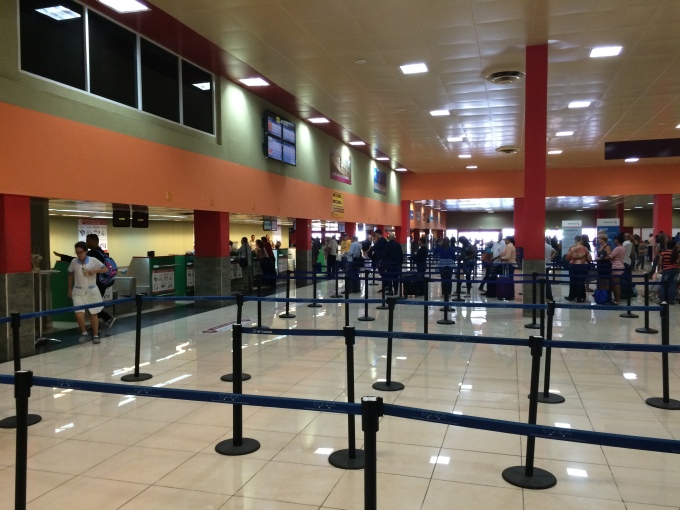 The clerk studied my passport, then looked up at me. “Sir,” he said “I am afraid there’s going to be a problem.” My guts did a barrel roll. “Did you vote for Trump?” “No.” He started laughing. “OK, just checking. Ha Ha Ha” From that point on he cracked one joke after another, quite a hilarious guy. Not exactly the time or place for this particular routine, however.

We were offered free checked bags, but I kept mine. John checked his. The VIP lady showed up again and moved us to a special Passport Control window where we did not have to wait in line. She seemed to know everybody in the airport and whatever she asked for, she got. All to our benefit. Passport Control could not have been easier. They take your picture, you give them the second half of your visa, they scan your passport, stamp your visa, which they keep, they hand you back your passport and say, “Please come again soon!”

It only took maybe twenty minutes to go through all this, then the VIP lady comes again and escorts us to the VIP lounge. There, a very nice gentleman collected our thirty CUC’s and offered to make us a sandwich. He then pointed to the bar area and advised us that all drinks are free. They would make a Mojita for us, or whatever.  Plus they had all kinds of snacks. Since it was early in day, free orange juice and coffee were perfect and some sponge cakes held us over till he brought the sandwiches. Here is the lounge: 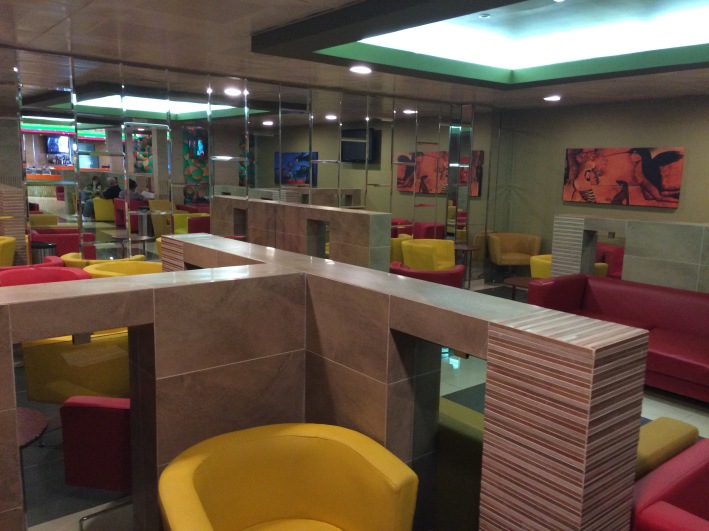 The place was only about a third full when we got there, and as flights were called the crowd diminished further. Soon it was just John and me. They had CNN on in English, so we finally got some details about the election.

The manager came around and invited us to take the escalator up to the second floor, where they have a bunch of shops in case we didn’t get enough souvenirs. I spent a few of my last CUC’s on some things, and went back to the lounge.

It turned out that our plane arrived on time, but since the airport has only four gates, they had to wait for a gate to open before we could board. It took about a half hour. Once again, the plane was about two-thirds full, so John and I could move around to window seats. We said our goodbyes to Cuba

In no time at all we were rolling into our gate in Miami. During the flight, US Customs came on the screen to advise us about the streamlined procedure for going through. Rather than fill out forms, all we had to do was scan our passports at one of a multitude of kiosks. When you do that all your flight info comes up, along with the form and some touch-screen check boxes.  Then it takes your picture and prints out a form to hand to the agent.

John passed right through customs. The guy stopped me and asked if I was bringing back anything. I said cigars. He asked how many. I told him. That was it. By then there were no restrictions on the number anyway, so I don’t even know why he asked. Probably just to pass the time.

Since we had already been screened in Cuba, TSA gave me a pre-check card to carry with me. I didn’t even have to take off my shoes. That was it. We were back in the good ol’ US of A!!!

Well, people, there have been a few changes since that plane touched down on the terra firma. My original objective was to see Havana in the time of the Castros. Turns out we cut it pretty close.  Now, with Fidel about to head up the smokestack, and lots of armed people around,  personally I would hold off on visits for a while.

Cuba, in the time of the Castros held few real surprises. Wealth is not flaunted, but there is wealth among those with the guns. Mostly, there is poverty and this is in places of relative prosperity. It takes no imagination to envision life in the small villages across this huge island. One thing that was not a surprise, because it is legendary, is the vitality and good nature of the Cubans themselves. This is a warm and welcoming country that deserves much better than it got.

Once the way forward is clearer, it will be an island well worth visiting. When the time comes, I cannot recommend highly enough the services of Anywhere Cuba. You will know what you are paying for and the people you hire will deliver. And, if trouble arises, they’ve got your back. For Cuba, my hope is for better days ahead.

For those who follow this blog, if you are wondering what the hell ever happened to the tales of Italy, we are headed back there next. I got a little distracted this fall.