The fort called Morrow Castle, at the entrance of Havana harbor was mostly for show. The real fort, that actually defended the harbor, is right behind it and is called Castillo de San Carlos de la Cabaña.

It was built because the Spanish, after they had plundered gold from much of South and Central America, brought it here to redistribute among their ships for the long haul back to Spain. As you might imagine, pirates of the Caribbean, not including Johnny Depp, took a keen interest in these proceedings and were happy to come into the harbor, guns ablazin’, to steal that gold. The Spanish, not amused, built the Castillo, which is huge and which once had hundreds of cannons bristling out of it. The pirates decided to take their trade elsewhere.

Over time, with the threat of piracy gone, the fort became a garrison for Spanish soldiers. One of the routines of the day of the was to signal the opening and closing of the gate into Havana, which, at that time was a walled city. They would fire it once at 4:30 am to signal the opening, and once at night to signal the closing. Over time, they developed a ritual for to process, which takes about a half hour. Today, the ritual is enacted daily at 9:00pm and generally draws a large crowd. This was to be our second tour and we were to meet Pedro at 7:45.

Unfortunately, we had trouble with an order for dinner at the Plaza Cathedral. I ended up wolfing down the dinner and actually jogging, not running, across the plaza and down the street to meet Pedro. John followed close behind. Pedro assured us we would still make it in time, but since I had four locks to deal with and also because it was now dark, I decided I would leave the camera in the room. I was sure somebody would have posted it on You-Tube. Sure enough, here it is. It runs about 5 minutes and may not be of interest, but it was a cool ceremony and when they finally fire the cannon, you can hear the shot echo back from the city.

Pedro is about our age and in roughly the same condition. Whenever we would ask a question he would stop to answer it. Considering there was a deadline to meet, we learned to save the questions till after the event. To his credit, he paid a couple extra pesos so we could go up to the top tier for a better view. This was much better than trying to watch through the large crowd.

We were transported to the event by taxi. The driver waited for us. He told us where to meet him, which was near a small food vendor. Pedro ordered dinner for himself and his driver. John and I picked up the tab, which they really appreciated. We got off to a good start with Pedro, which was good because we would see him again tomorrow.

We did not get back till after 10 and we both agreed we had had enough. That night was the best sleep I had in Cuba.

Our next tour was not to start till 9:30 am, so that gave us some time to freshen up and to get some breakfast. Here is the breakfast served at the Casa Venezia:We were each given this fruit plate, which included a couple items I did not recognize. Guava was apparently one of them. It was all yummy.

Then, an omelet. The juice was a smoothie of some kind. All delicious!

Our next tour was to be our choice from among a variety of museums. When we met our guide, Eduardo, however, he strongly recommended the art museum. It would have been our choice anyhow. Here is Eduardo with John:

Our first impression was, they have sent a boy to do a man’s job. Not so. First, he had exceptional command of English, which he learned, he told us, because his sister could speak English and whenever she would gossip with her friends, they would use English as their secret language. He learned it to eavesdrop. Then, we learned he is a PhD candidate in cinematography with extensive training in the arts. And then we learned that this was his first tour, so to make it the best possible experience for us, he had come to the museum the day before to take extensive notes on the works we would be seeing. We were sold!

Well, the Museum of Belle Arts is located in central Havana, a long hike from our home. Many of the streets are brick and the sidewalks are narrow:

Considering the vehicle traffic, the three-wheeled bicycles which make little noise, and other traffic a person could easily get whacked if they stray to far from the sidewalk.

Eduardo took us through several neighborhoods and along the way we passed La Floridita, one of Hemmingway’s famous watering holes.

Clearly, we were in a much more upscale neighborhood, and yet you had only to look past La Florida to see the problem that plagues virtually all of Havana, a rapidly accelerating urban decay.

Still, where capital was available, it could be beautiful again!

At last, we were at the National Museum of Belle Arts.

I brought my camera and asked Eduardo if it was OK to take pictures. “Sure, no problem” So, here is how the place is laid out:

It covers three very large floors and begins chronologically with works beginning in the colonial period and ending post-revolution. The tour lasted over three hours and we could have stayed longer.

When the Spanish arrived in 1492, the first order of business was to enslave the native population, which wasn’t all that numerous to begin with. In a few short years, however, the natives were gone, having been wiped out by diseases against which they had no defense, coupled with the kind treatment they received at the hands of the conquistadors.

With no slaves around, the Spanish did what everybody did back in those days. They went to Africa and got more. Over time, it became apparent to the colonists that some of their slaves had special talents, including the graphic arts. Arrangements were made to import paints and canvasses and soon some of the slaves were given enough training to paint their masters. The one thing no one could teach them, however, was how to paint hands, which is a special skill. For this reason, most of the slave paintings are from the chest up. Naturally, not one slave was ever given credit for their work, so this is what you get:

Apparently, all the slave painters had the same last name, “Anonimo”. What are the odds?

The next evolution of art centered on realism and the painting of landscapes.

Here is a painting depicting the Had Dance, in which young men, wishing to dance with a certain lady would throw their hats near her. If she picked it up, it was game on!

But it did not take long before those boundaries were pushed out.

In this painting by Jose Mena, called “The White Flower” you see the young lady at the crossroads between the ways of evil on the right and righteousness on the left.

In the painting of the couple below, they are together, but each wants more. Good luck!

It was at this point that approximately 15,000 guards, in unison, shouted “NO PHOTO!” From then on, it was cat and mouse, but the mouse lost repeatedly as guards seemed to come out of the very woodwork. Fortunately, the best paintings can be found on line.

For example, before Picaso became Picaso, here is an example of one of his early portraits: 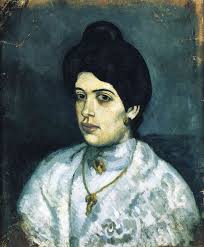 Each of the markings is a symbol. Call Eduardo. He’ll gladly tell you what they are.

One of the more interesting painters exhibited at the museum is Carlos Enriquez Gomez. His most famous painting is on display, “The Rape of the Mulattos”

Actually, it is more of a kidnapping and is sometimes translated that way. The colors, the ghost-like images, the  power of the figures, this is a painting you remember long after you are heading home. It is based on the “Rape of the Sabine Women” painted by several Italian artists, which we’ll take a look at when this blog finally switches back to Italy.

Eduardo saved the best for last, though. The painting, “La Gitana Tropical” (The Tropical Gypsy), by Victor Manuel Garcia. She is the Cuban “Mona Lisa”.