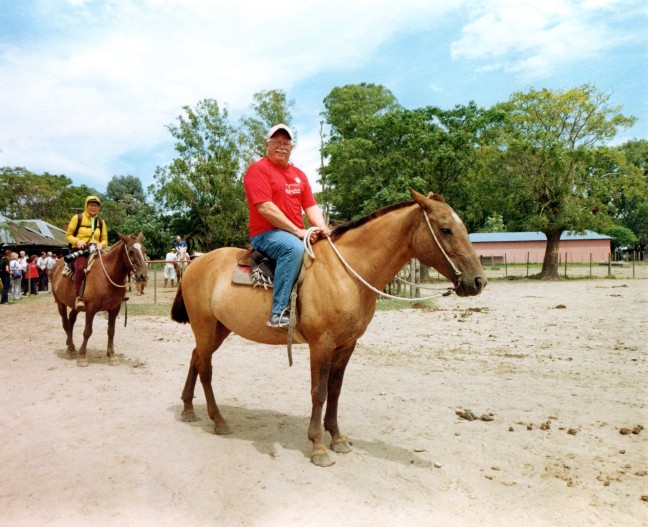 The flights home for the Travel With Alan group didn’t leave Buenos Aires till late at night. Ours was scheduled for just before midnight. So, Alan included as part of the package (not a side trip) a day at the beautiful Estancia Santa Susana, located about 50 miles from the port, out in the pampas. Arrriba! 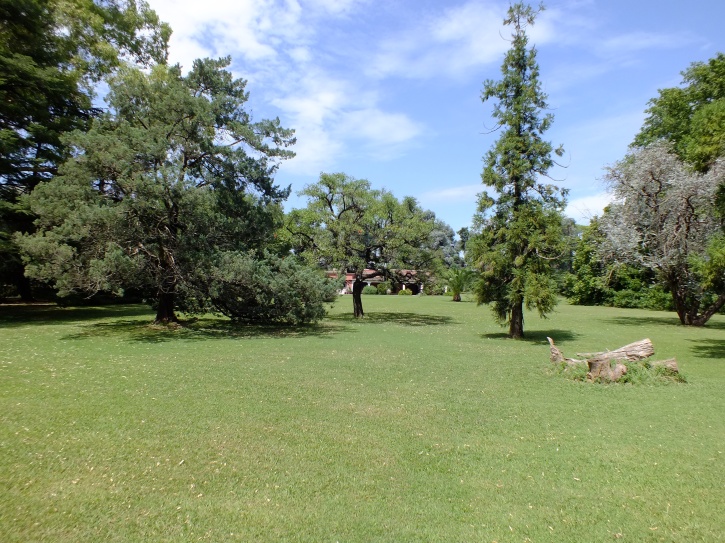 Soon we ready for adventure! 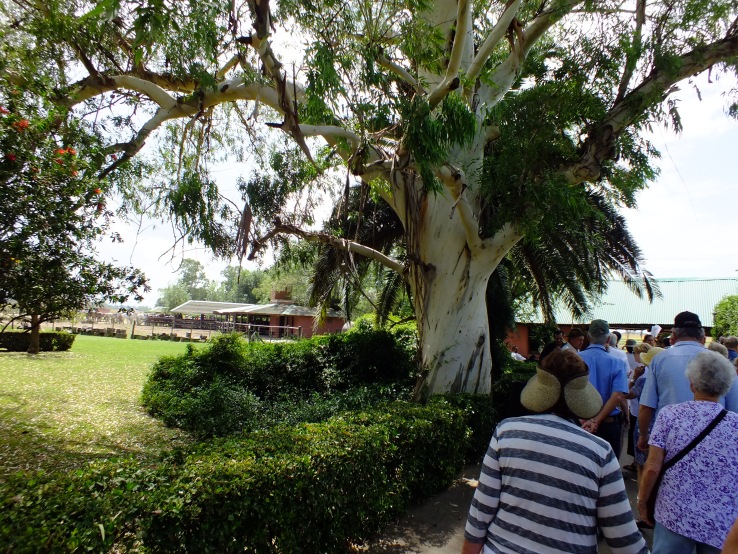 Once we got inside we were met by the staff of the estancia who presented us with a several different options of things to do. One of the options was horseback riding. Our friend Ron Shafer professed to be an accomplished rider and I, although I’ve not been on a horse for maybe 35 years, figured it’s probably just like with a bicycle. You never forget. Our wives declined, so off we went!

I requested a horse who might be in the very last stages of a quiet life spent munching grass. Instead I was given one which only a few weeks before may have been roaming free on the pampas having escaped from his earlier career as a race horse.

Regardless, It took no time at all to recognize that the biggest challenge would not be riding him, it would be getting on. My horse and I were led into a more open area by one of the gauchos who runs the ranch. I quickly learned that this guy’s background was more in the area of cattle roping and less in the customer relations arena. He quickly observed that the stirrups were set too high for me to reach so he lowered them to cowboy level. I was barely able to get my tootsies up there and the idea of hoisting myself onto the saddle seemed like an Olympic dream. But then the gaucho came back, and rather than offering an assisting hand, simply said, in a voice that meant business, the Spanish equivalent of “GET YOUR ASS UP THERE!” 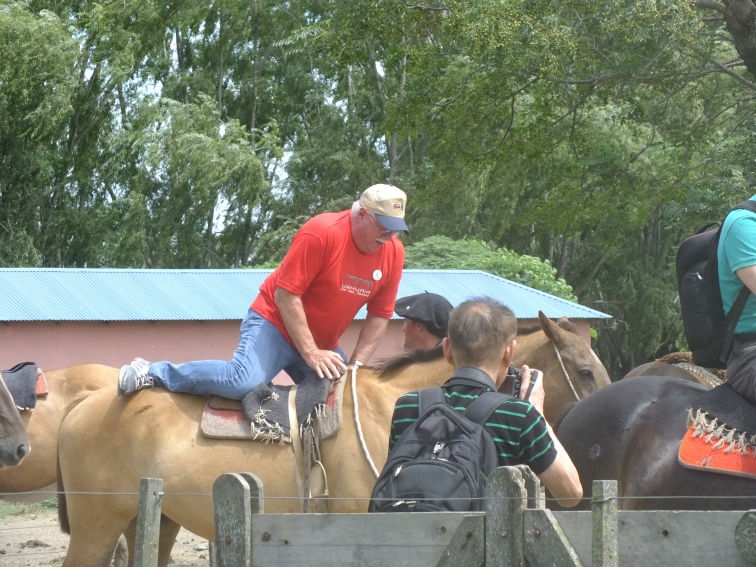 I may not have looked as graceful as I had hoped. Ron rode up and said, “Did you say you’ve been on a horse before?” Well, not to be deterred, soon I was tipping my hat to the beautiful Senora Dianne! 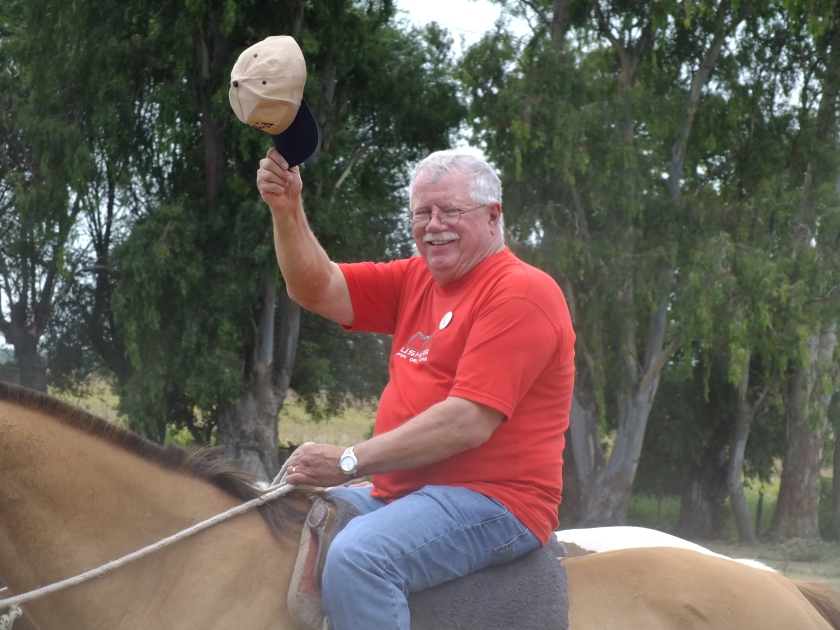 Thankfully, as we rode off there were about twenty other horses, so I made sure mine was well boxed in, in case he decided to re-live his adventures on the pampas. The whole thing lasted about a half hour. Then is was time for lunch. And, in typical Alan fashion, it was a feast! 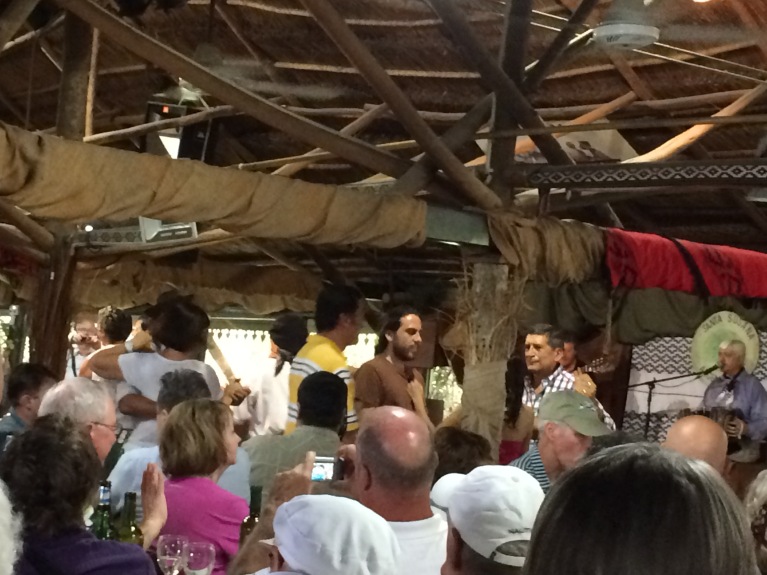 After this, there was a tango/folk dancing show which was entertaining, but after the previous evening we were a little spoiled. Then, we went on a tour of the restored original ranch home. 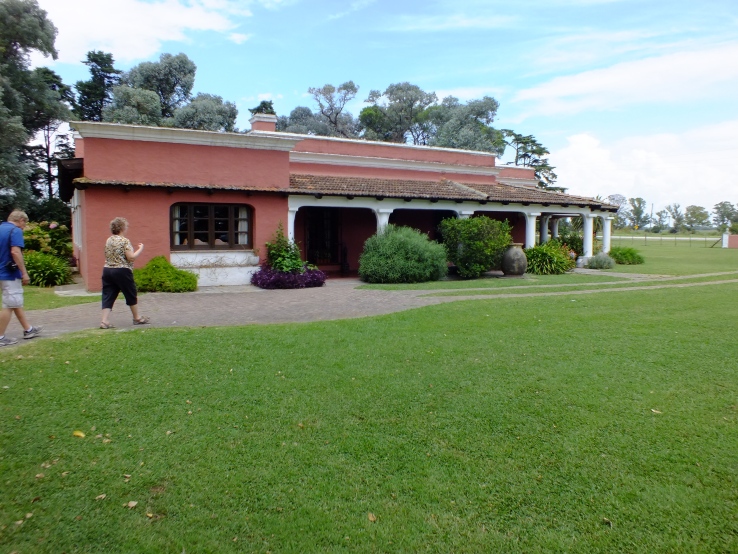 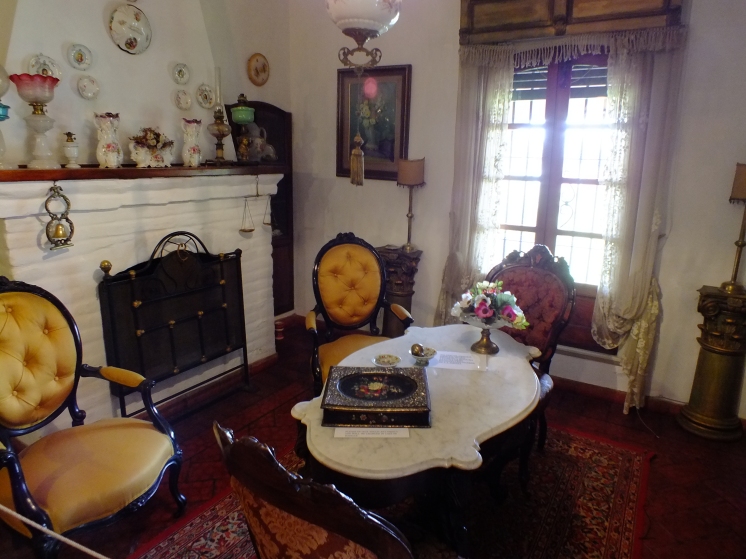 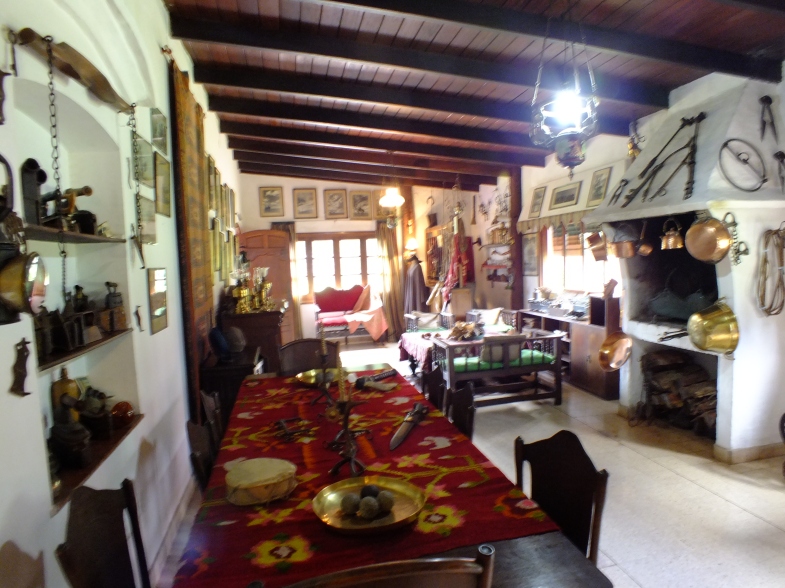 They even built their own chapel for the gauchos, who no doubt were in need: 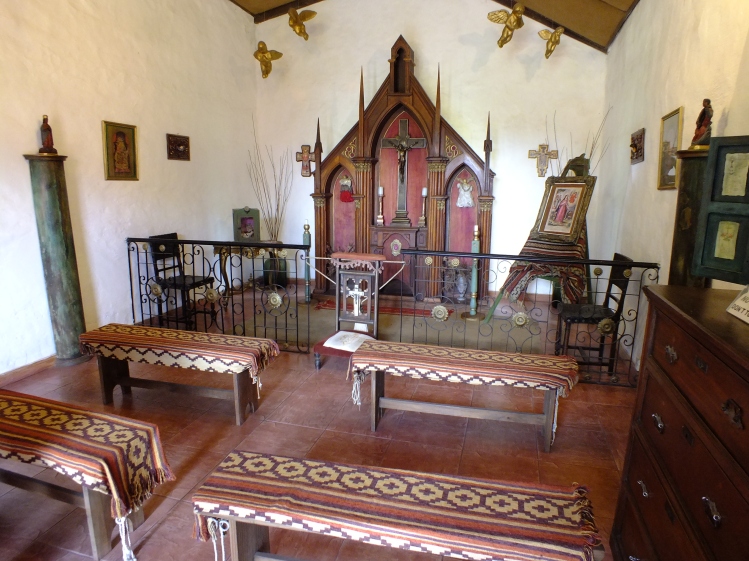 And, they have a fine collection of hats of the day: 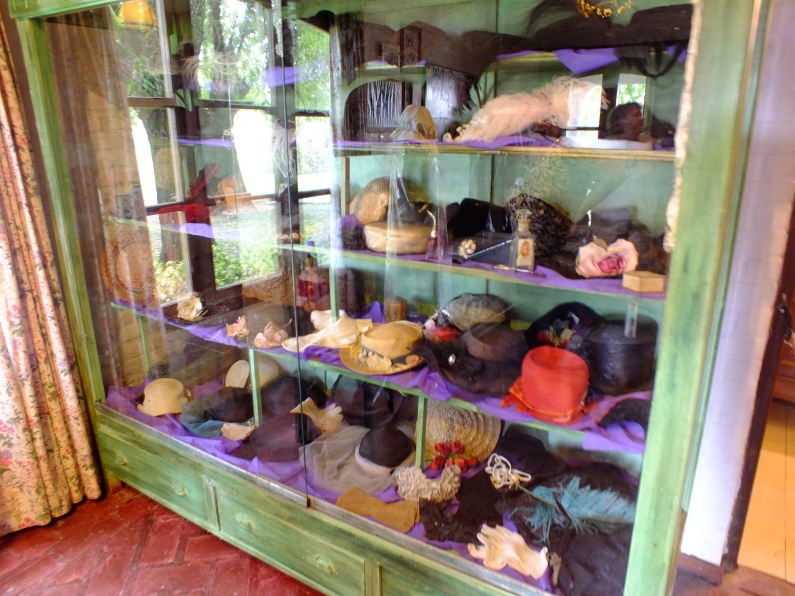 After this tour, the gauchos put on a demonstration of horse rustling, uh, I mean roping: 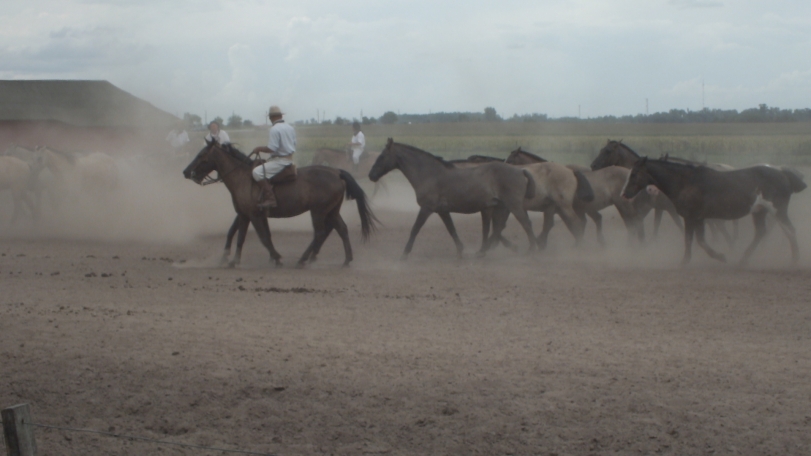 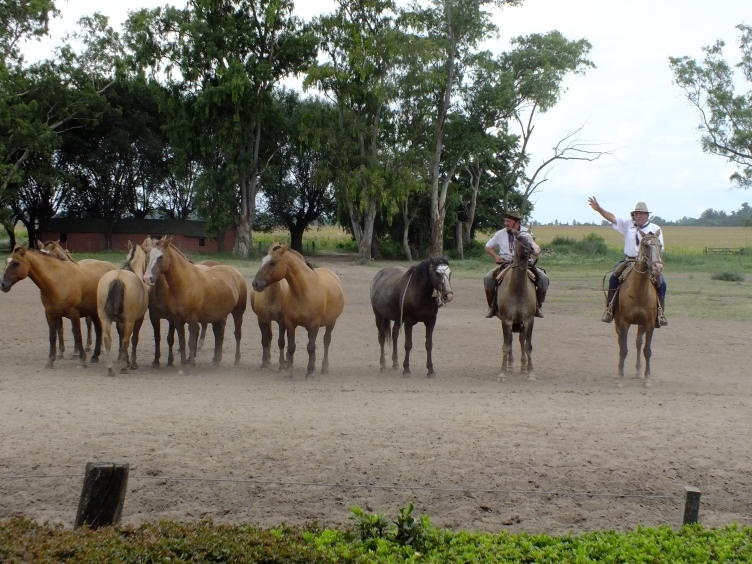 Then it was time for just a little relaxation before we headed to the airport. 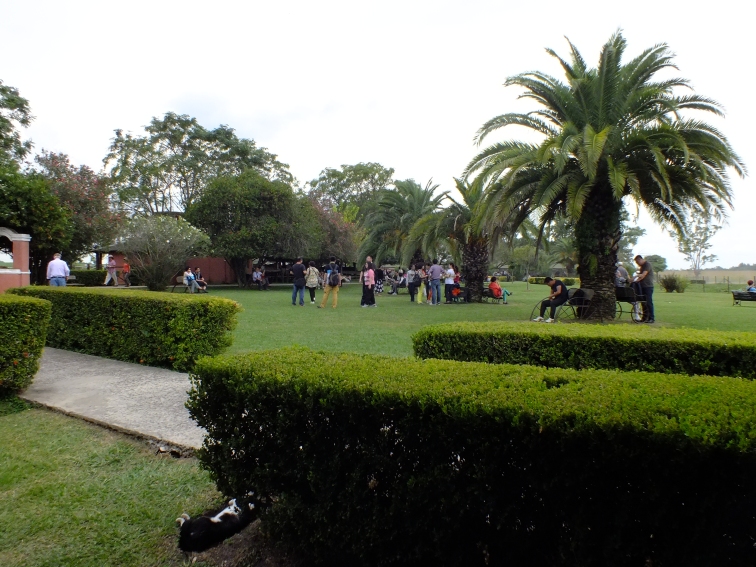 A great way to end the day and our South American adventure! On our way to the airport it started to rain: 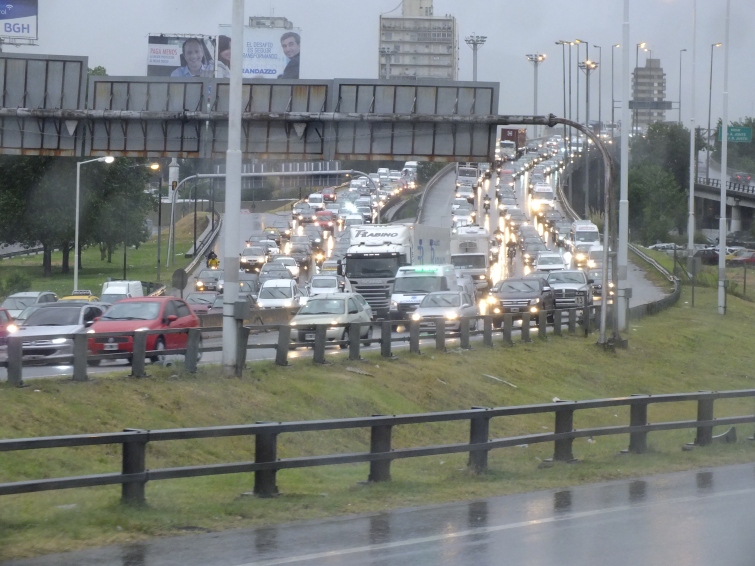 In our tour of Buenos Aires I forgot to mention that even though it was Tuesday, the country was still celebrating Carnival. Today is the day everyone returned to work! Even with traffic delays, we got to the airport in plenty of time. So, here’s a helpful tip. If you fly American out of here, get to the airport WAY early. The place was a zoo. Fortunately, American put us on LAN airlines and we got through the line in a hurry. Of course there is still customs to go through and passport verification and security. We had plenty of things to do till midnight.

Throughout the ticketing process, NanSea, who was flying to Chicago, was very helpful to us all. We parted friends, and, we can say without reservation, that Travel With Alan is everything it claims to be.. Incredible prices for an incredible experience! So long as you are willing to be tied to a group. Naturally, we have some future destinations in mind. We will be happiest to be on our own. But, if Alan comes up with another destination off our radar where a snapshot is better than missing it, we’ll be pleased to be back on board. 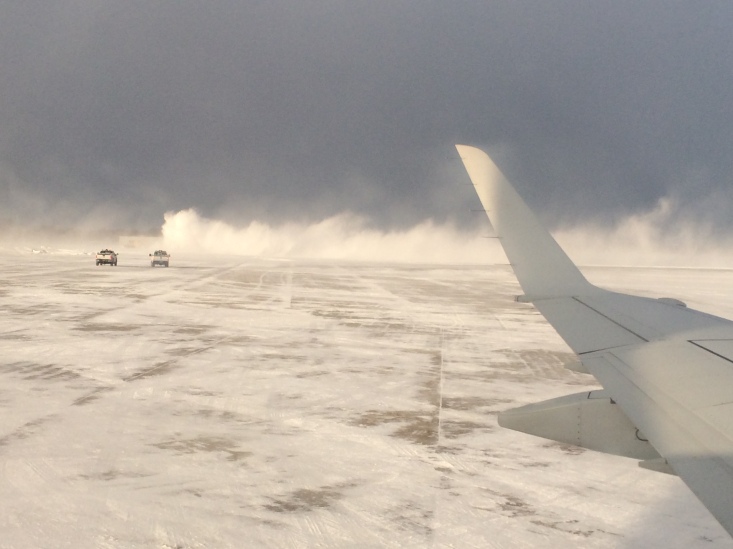 And so, our story ends. Ohio welcomed us in its usual fashion. We would not have expected less. Thanks to many of you for you kind comments. Now I’ll have to figure out what to do with this blog!

It is great to be home! (Seriously!)

© David Michael Stoner and Oldcapehorner, 2014-Present. Unauthorized use and/or duplication of this material without express and written permission from this site’s author and/or owner is strictly prohibited. Excerpts and links may be used, provided that full and clear credit is given to Mike Stoner and Oldcapehorner.wordpress.com with appropriate and specific direction to the original content.