Following the revolution, Cubans were banned from buying foreign cars, especially US cars. Over 150,000 US cars remain, frozen in time. Now, many are used as taxi’s. 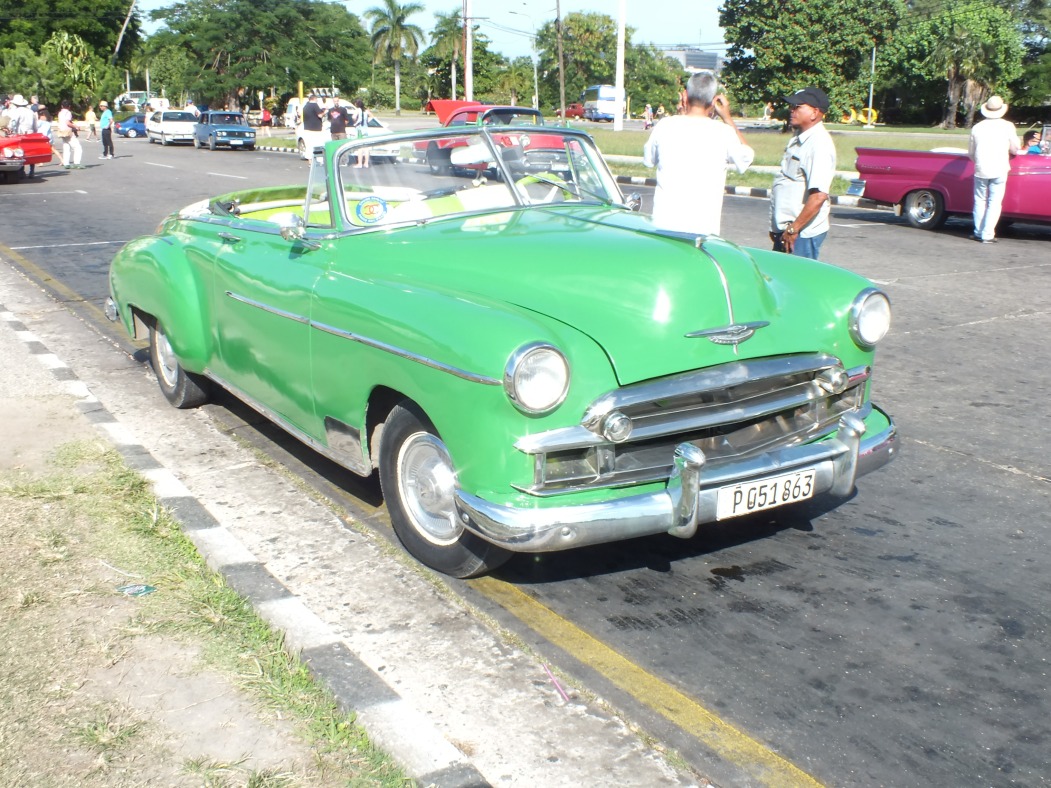 For our tour, we were treated to a ride in a 1950 Chevy convertible. It showed its age, but was still a very fine ride:

The nice thing about our tour guide was that he was willing to let any clown sit behind the wheel!

Now, I’m going to show you lots of pictures from this tour, but they don’t compare to the actual experience. Wanna come along? Here we go! (video)

Perhaps you noticed how, after you leave the immediate area of the Capitolio, things take a sudden and dramatic downhill turn. It’s not that public projects aren’t happening. It is that the need is so overwhelming it seems impossible to keep up.

The first part of our tour took us around the harbor area. This stature of Jesus, made of Carrara marble, is said to be the largest in the hemisphere, bigger than the more famous one in Rio. 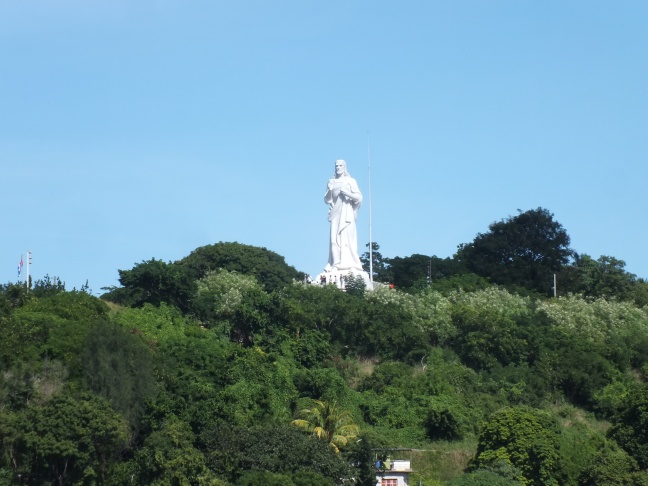 In the days before the revolution, Fulgencio Batista made a personal fortune through his association with organized crime. Casinos, prostitution and drugs brought him millions. His most famous partners in crime were Meyer Lansky and Lucky Luciano. Meyer had been kicked out of the US and deported to Sicily, but found it difficult to manage US operations from there, so he secretly re-located to Cuba. There he found a warm welcome from Batista and soon casinos were springing up all over the place. It was from this home that Lansky and the other bosses from the US would routinely meet to divide up their cash.

It is said that when Batista was finally driven out of Cuba and into exile first, in the Dominican Republic and later, Portugal. he had over $300 million USD’s at his disposal plus much more stashed here and there.

Cubans, particularly our guides, all mark time from the revolution. While there are reminders everywhere, they now seem to be fading. Most often you will see a likeness of Che Guevara, almost never will you see a likeness of Fidel. Or, at least we didn’t.

Our first stop was in the heart of Havana at the Plaza of the Revolution. Some familiar sights can be found there:

And, if you are looking for a taxi, well here you go!

This is the National Theater of Cuba, absolutely gorgeous. Obama spoke here during his visit.

Below is a statue of Jose Marti, best remembered here as the leader of revolt against Spanish rule, which did not end until the turn of the twentieth century with the Spanish-American War. Marti was killed in battle in 1895. For Americans who have heard of him, though, he is remembered, not as a revolutionary, but as a poet. He spent a considerable amount of time in the US and became ill. He went to a small town in the Catskills to recover. While there he wrote a book of poems called “Singular Verses”. Some of the lines in this book were made famous by Pete Seeger in the song “Guantanamera”. Here are some of the other lines, his hope for his homeland:

Sadly, even for such a remarkable man, you find idiot tourists wanting to share the spotlight.

Part of the plaza is a park: 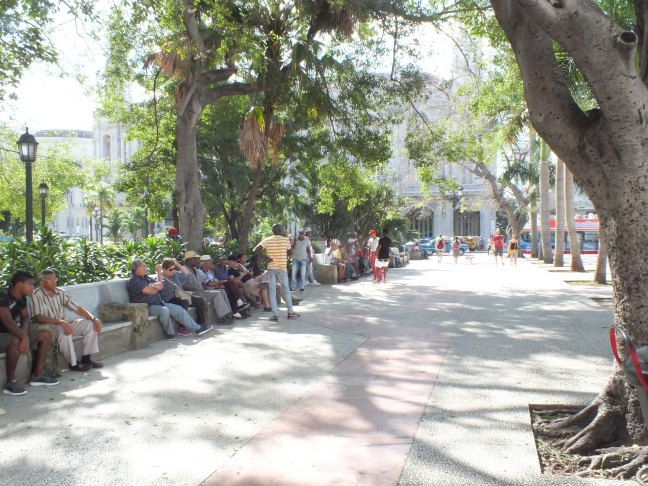 The Capitolio is undergoing renovation. Once the seat of government before the revolution, it now houses the Cuban Academy of Sciences. 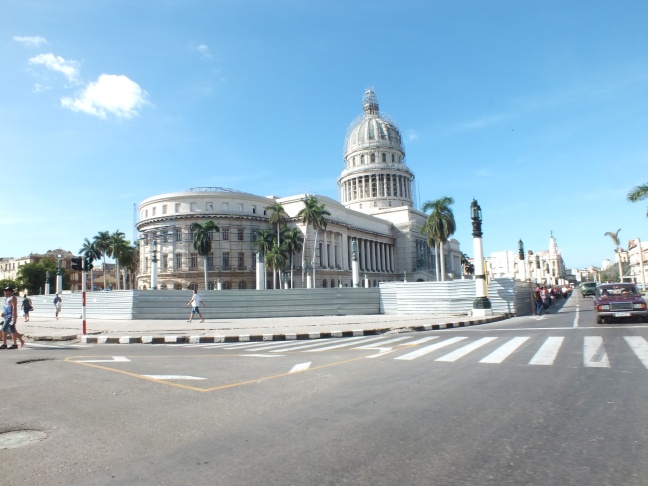 Next, Havana’s Chinatown. Chinese immigrants came here in the 19th century seeking prosperity. They did not find it. Over time, however, substantial inter-marriage occurred so that now it is uncommon to fine a person purely Chinese.

This is the entrance to the University of Havana. Quiet now, in the days before the revolution this became the center of protests against Batista. He closed the university in 1956, rounded up student leaders and had them publicly executed. The university remained closed until the revolution.

Following the revolution Che Guevara, among other duties, served as Minister of Industries. One of the government buildings displays his likeness.

Across from the government buildings is an obelisk in memory of Jose Marti.

Not far from this area we came upon these walls.

Inside them you will find the graves of over two million people, one of the largest cemeteries in the world. It even has streets and blocks. At one time, the remains of Christopher Columbus were buried here. 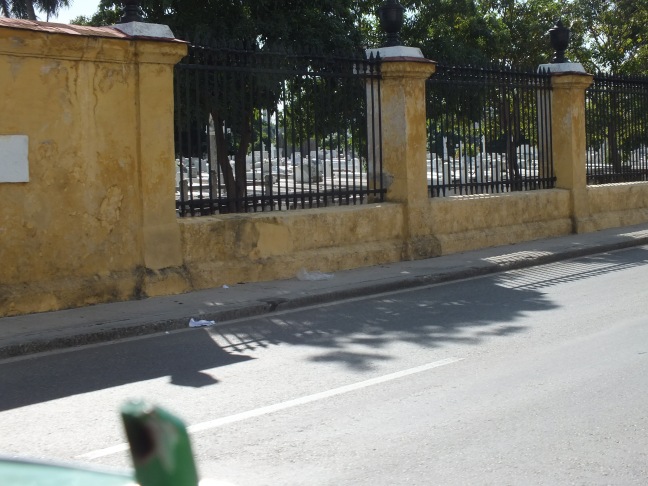 Next we stopped at a beautiful park, called Isla Josephina. The Almonderes River flows through it.

A very pastoral setting, great place for a picnic.

Except, there is trash everywhere 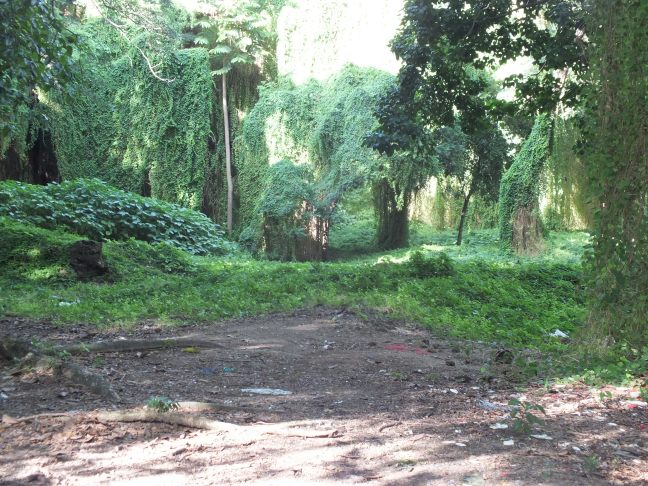 But, somebody needs to clean this place up. And, keep it clean. What a shame.

Next stop, John Lennon Park. After the revolution, the music of the Beatles, and many others, was banned for promoting drugs and an objectionable lifestyle. Later, though, no doubt under some pressure, they realized that the Beatles were preaching peace and love. To atone for their mistake, they created John Lennon park. 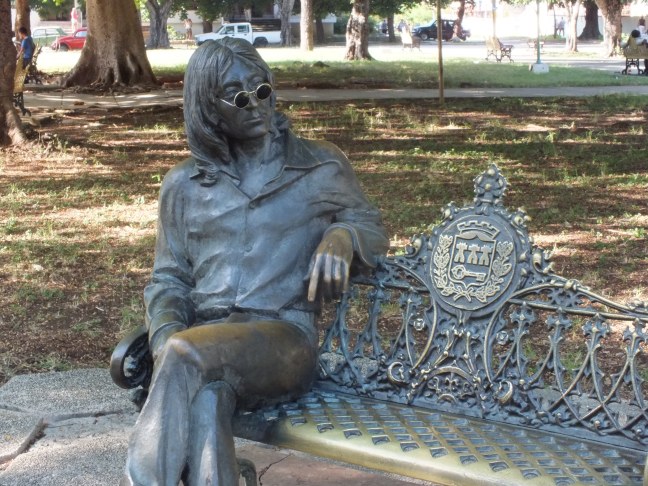 Unfortunately, after this statue was put in place, people kept stealing his glasses. For a couple years they were replaced, but finally the park managers just gave up. Our guide told us this story and then said that a little old lady, who was standing nearby, had taken it upon herself to make sure John always had glasses. I asked him to ask her in Spanish if she would be willing to sit with us while the guide took our picture. Apparently, few, if any, had ever asked her. She was reluctant at first, but then sat down with us. While we were sitting there, she gave me a big kiss on the cheek. The guide missed that shot, however. John Starr gave her a tip as well. We made her day, and she made ours!

Here is a view of the Havana skyline. No skyscrapers, that’s for sure.

In the Old Town we found this mural, featuring prominent Cubans throughout history.

The figures, though, were made of acrylic and sand. 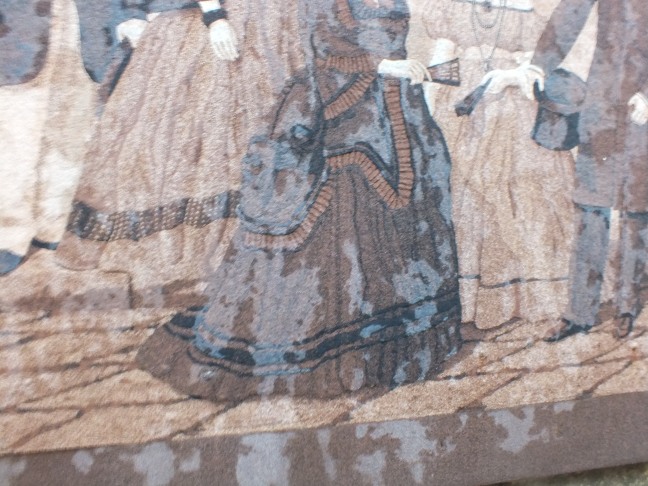 At one end of the Arms Square is the building from which the Spanish used to govern the country. Apparently, one of the countesses who moved in, took exception the clip-clop of horses and rumbling of heavy carts on the stone pavement outside her window. 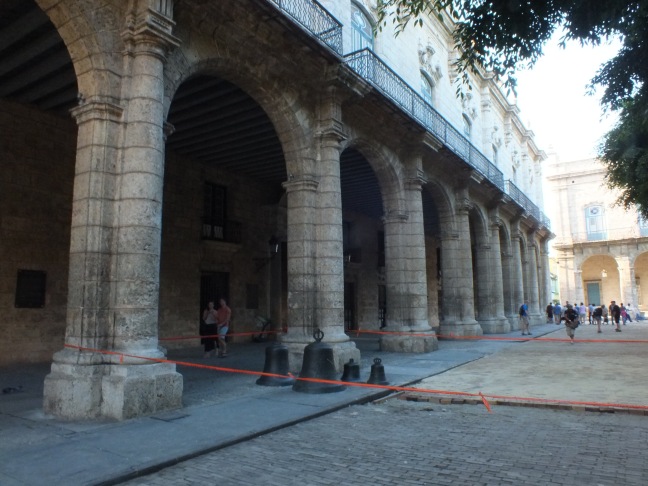 So, in true countess fashion, she had the stone paving replaced with wood to make things quieter, a tradition which continues to this day.

This building houses, among many other things, a currency exchange. Notice anything unusual?

Each floor is built a different height, apparently a trade-mark of the designer. 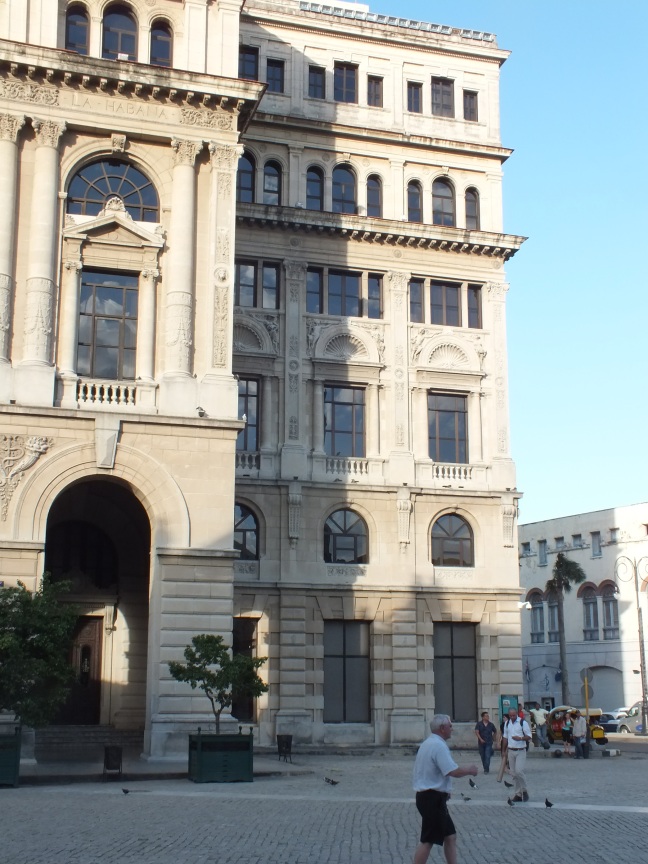 And, we encountered the statues in the square. One is a statue, the other is an actor.

Near the Plaza Viejo we encountered this hotel, now completely gutted. Renovation is underway at a cost, no doubt in the millions. Good luck!

At last, it was time to say farewell to our first guide, Luis. What a great introduction to Havana this was! In a few hours, our next tour would begin. In the meantime, a little dinner on the Plaza Cathedral was just the thing!