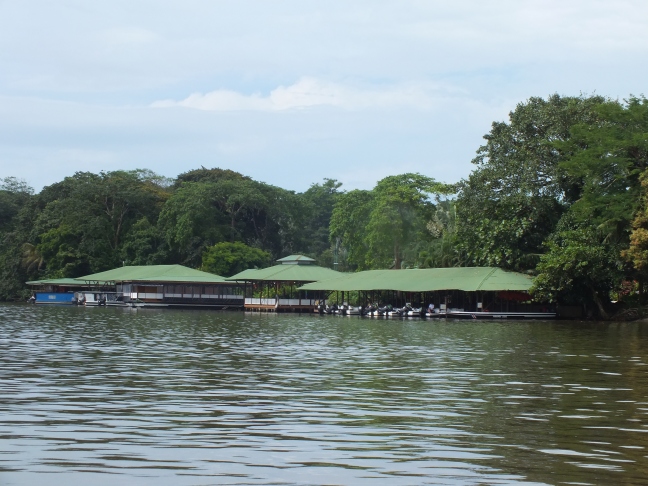 By the time our boat pulled into the Mawamba Lodge it was hot enough to blister paint and the humidity was high enough to leave a wake in the air as we passed through. Imagine our surprise, then, when we found that our room, in fact none of the rooms, was air conditioned. 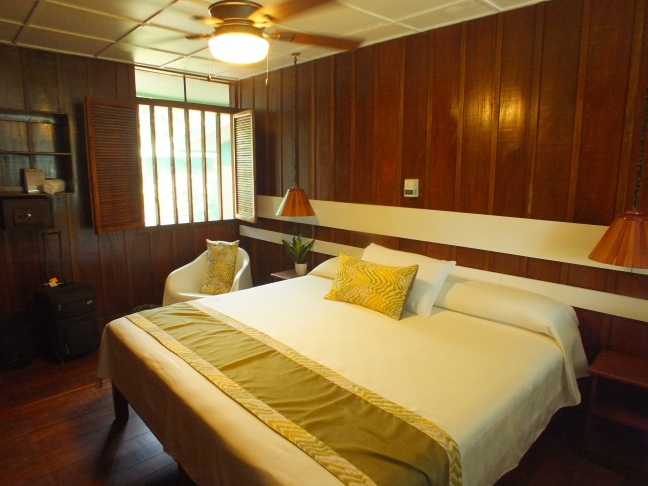 There was the screen you see and another on the opposite wall with a fan in the middle. OK, so here is what we discovered about the Mawamba Lodge. It is kind of like going to camp. True, the pool and lounge are not generally camp features, but the rest of it seemed quite familiar, in a Band Camp kind of way.

And, you know you have to kind of pay your respects to our adventurous predecessors, like, say, Ferdinand Magellan. Did HE ever complain about the lack of AC? Of course not!

It was not, entirely, the lack of AC that proved to be most daunting aspect of our stay at the lodge, however. It was something else entirely. In the picture above note the wall behind the bed, a pleasing reverse batten style of woodwork. Well, At the lodge, each housing unit contains two rooms such as ours, separated by a repeat of the aforementioned wall. 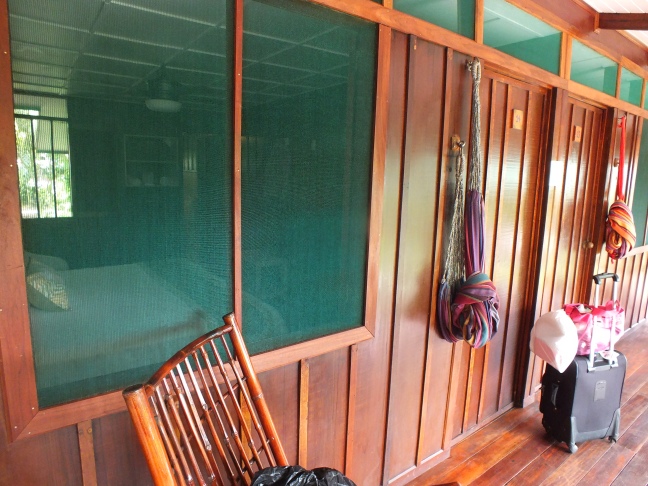 Here we are, peering into the as yet unoccupied room of our neighbors.

Turns out that the only separation between the two units was that wall, which, simply put, consists of a nicely trimmed out sheet of 3/4″ plywood. This means that the slightest of sounds generated in one unit is transmitted in its entirety to the next. It may even be amplified. Moreover, this element of construction carries all the way to the bathroom in the back. People, when you are in a country, the staple of which is rice and beans, lets just say the anxiety level can get mighty high in such living arrangements.

Later, in our comings and goings, we would introduce ourselves to our neighbors, a very nice Dutch couple, on this very porch.  By that time, though, it is an understatement to say that we already knew them intimately.

Shortly after we moved into our room I looked out the back screen and, to my surprise found this guy basking in the sun: 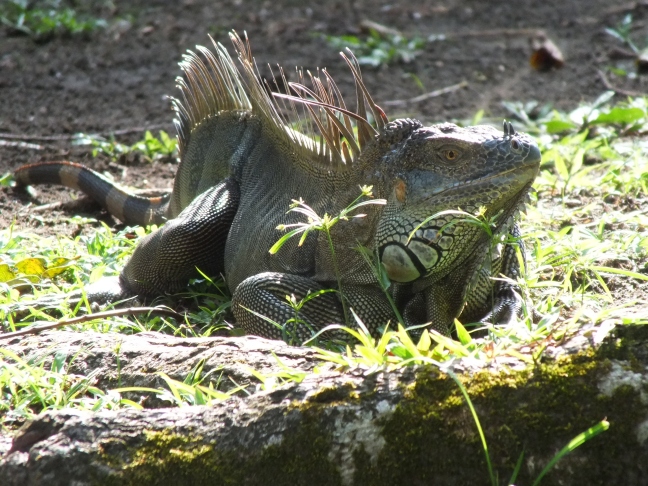 Iguanas were all over the place, all well fed. It was always a pleasure to come across them. After all, who couldn’t love this face? 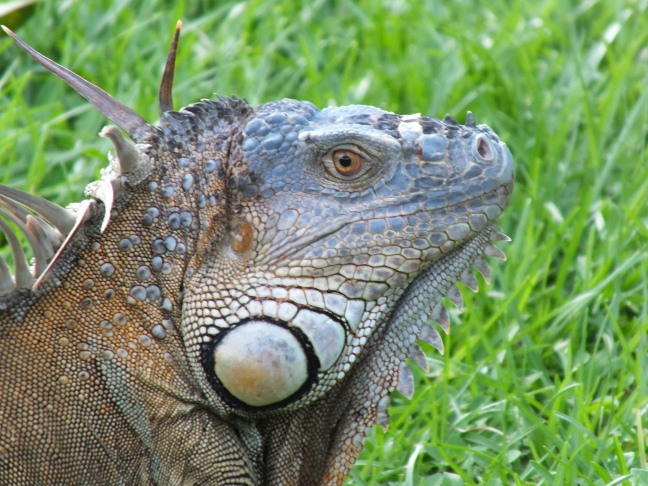 By the way, those growths on the side that look like cue balls apparently, in some way, help the iguanas keep cool. By the end of our stay we all wished we had them.

When we checked in we were told that we were signed up for the morning tour, the next morning as well as the lodge tour and the afternoon tour. In addition, it was now nearing the end of the time of year when sea turtles come ashore to lay their eggs. If we wanted to see that, the cost would be extra and the tour would be a night. We thought, you know, why not? So, we signed up.

We were then told, that since out boat had arrived late (news to us) they were holding dinner for us at the cafeteria. Once we got there we were to sit at the table with the name of our guide, who was called Favio. So off we went.

In true camp tradition, the food was served cafeteria style. There was always a nice selection and soon our plates were filled and we headed for Favio’s table. There were still people there, none of whom were Favio, however. And, this was not the outgoing talkative bunch that we had experienced elsewhere in Costa Rica. So we started in.

Soon, a tall slender man came over and introduced himself as Favio. We gave him our names and he said we were signed up for the morning tour, as was everyone else at the table. He said, to us all, “Well, they are calling for rain tomorrow. BUT, what’s the worse that can happen? We get WET! Ha ha”. Then he left to join the other guides for dinner. 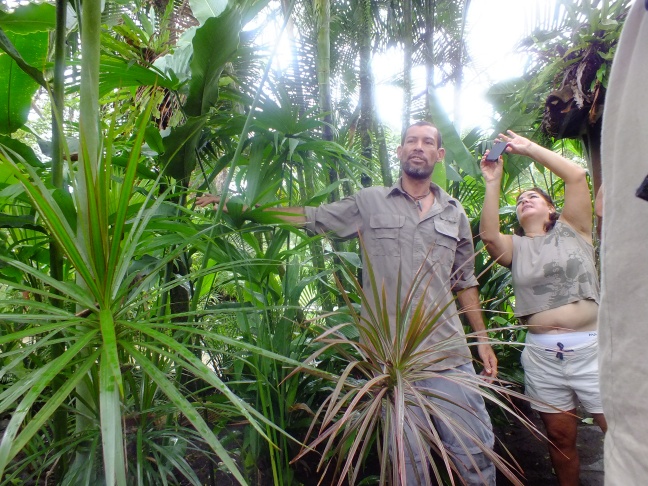 Well, Dick Goddard himself could not have predicted the weather better. By the time we assembled at the boat docks at 6 am it was absolutely pouring rain:

Our boat was ready. Wait a minute. Where’s the roof? 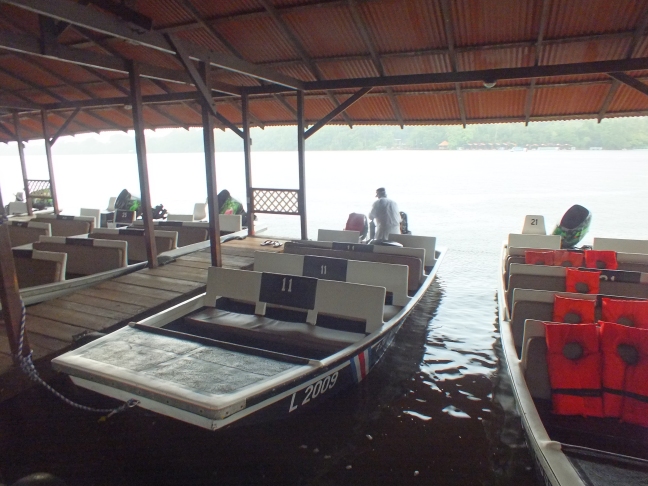 Dianne and I were once again in the front. Good time for a selfie! 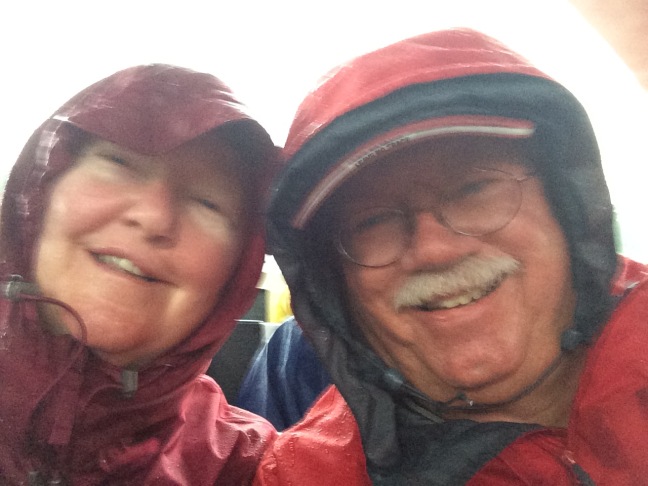 This time, there was no poncho supplied. We wore waterproof, or quick-dry stuff we had packed And, of course, it was a warm rain. But waterproofing does not solve every problem.

We were soon winding our way through the jungle: 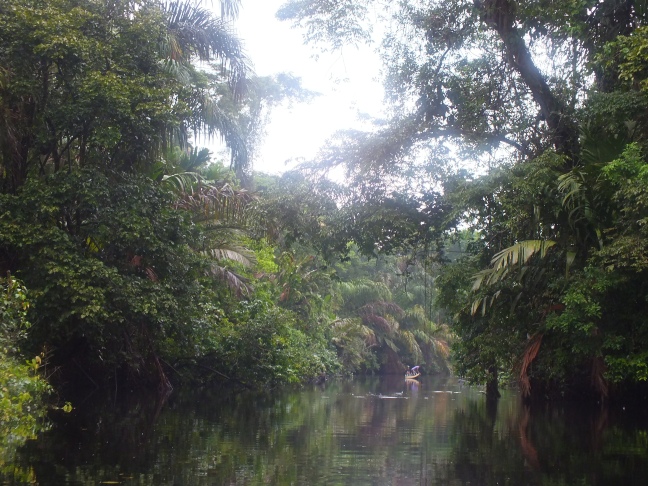 So, let’s say that you’ve had a hard day in the jungle and you decide to lean up against a tree for a little rest. Well, if the poison toads and snakes don’t get you, there are always these guys to liven up your day: 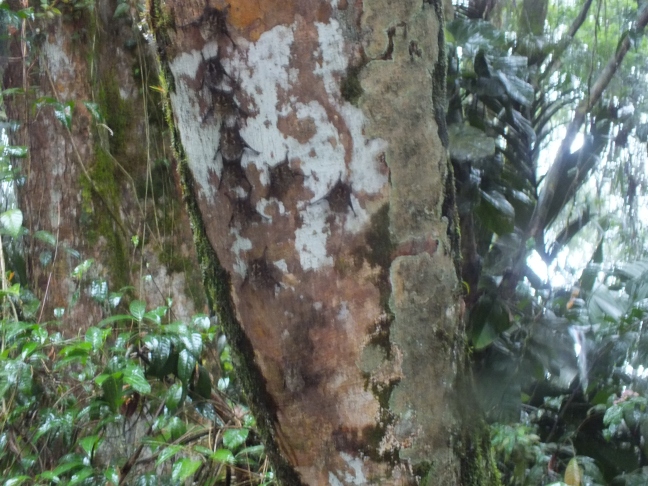 The upside is, in these waters we did not see any crocodiles (not that there weren’t any). Instead we met a few of these guys: 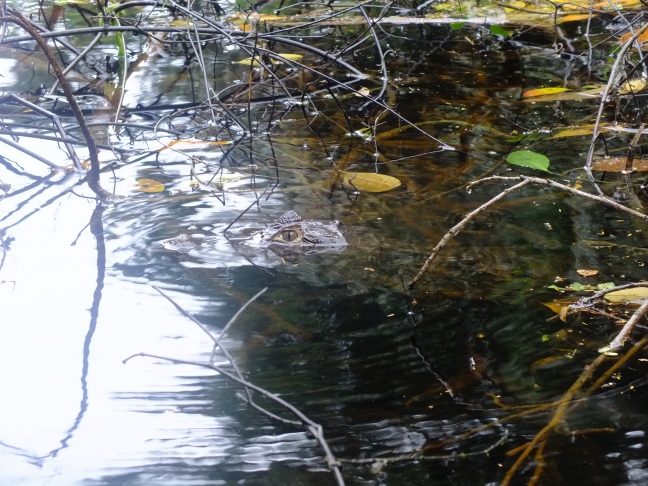 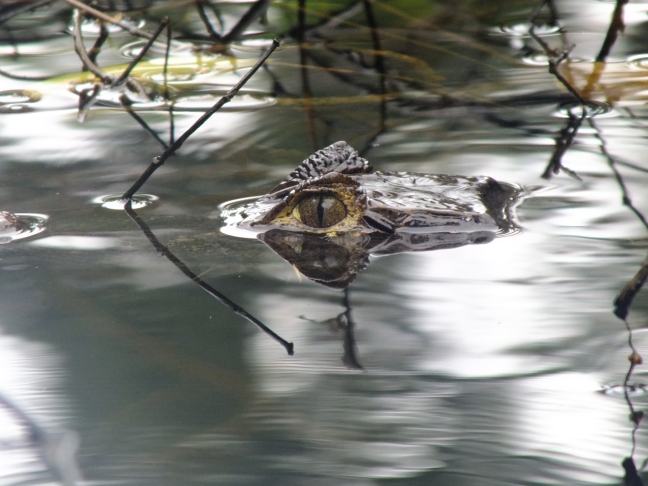 This is a caiman, a closer relative of the alligator. Not quite as big as a croc, still a most unwelcome swimming partner.

In time, it quit raining and the river was quite pleasant: 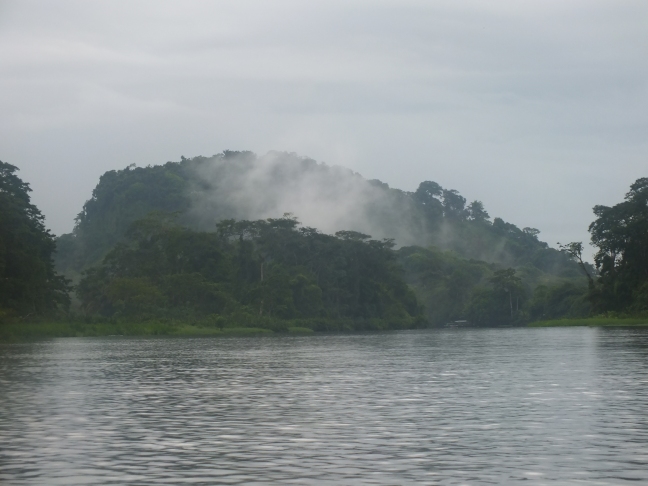 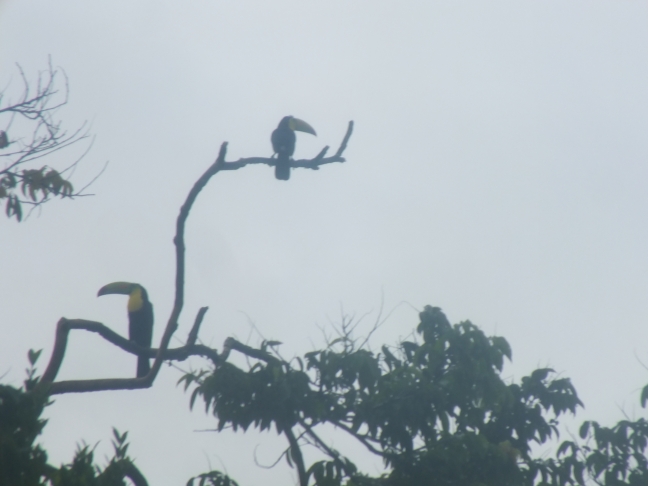 On our later tour we saw both new and familiar faces:

This bird is called an aninga. 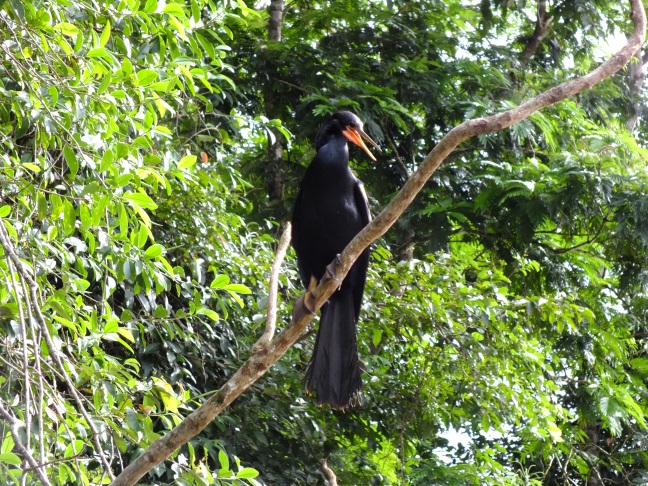 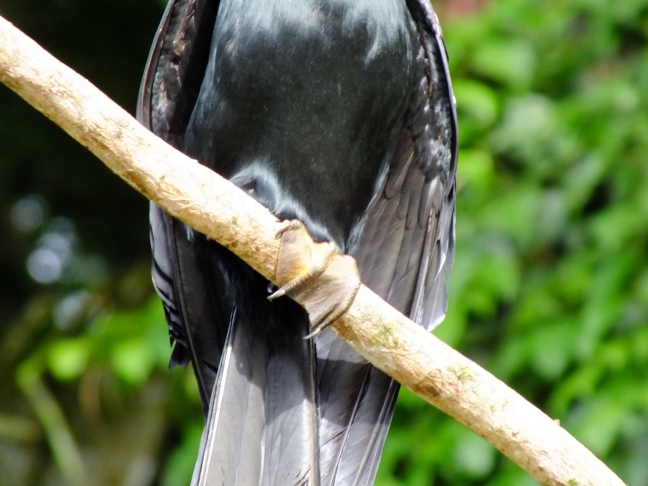 It is a water bird, famous for being able to dive deep and stay under for very long periods of time. To help it dive, however, it has no water repellent on its feathers so, after a tasty meal, it has to sit on a branch and dry out.

It did not take long till we were back among the Howler monkeys: 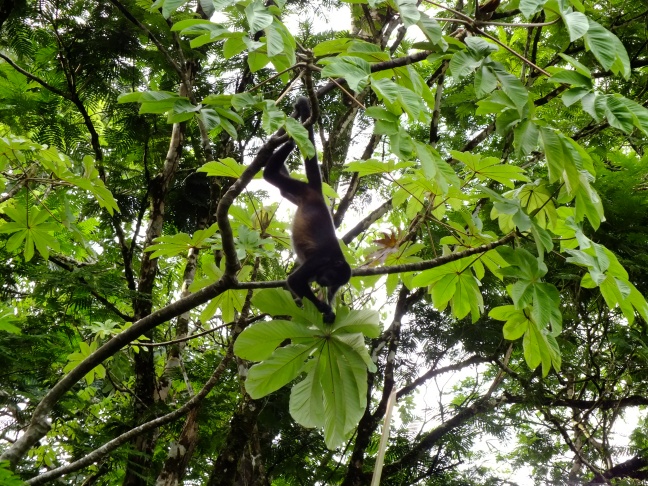 But, for the first time, we found a family of White-Faced Capuchin monkeys and they were quite active: 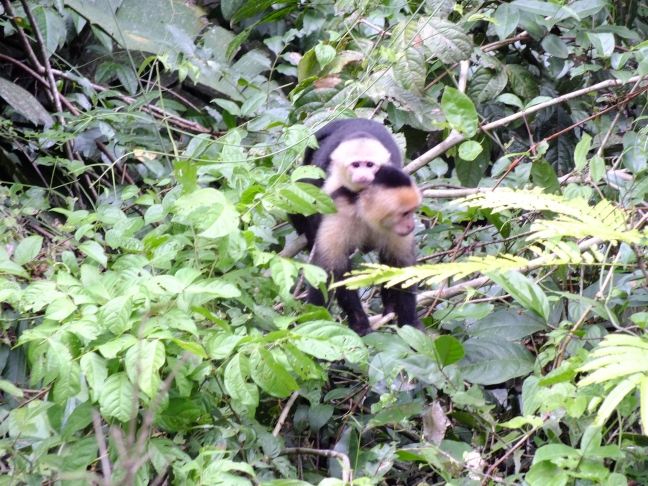 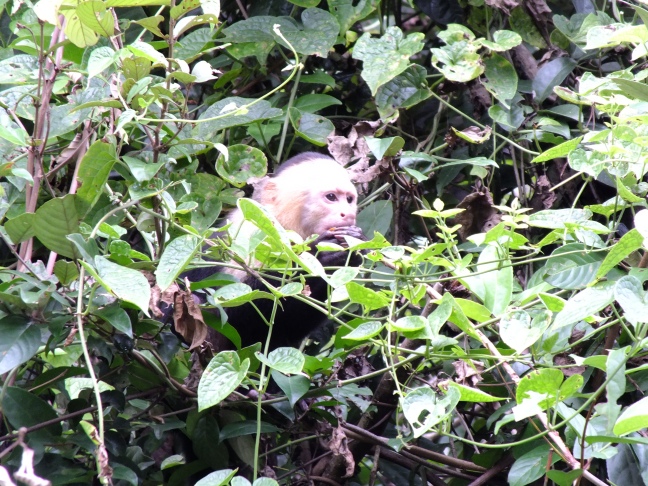 Favio, of course, explained in detail all the qualities of the various animals and much more. He is a guides, guide. Extremely knowledgeable, he is a take-charge, no nonsense, high energy guy. He is another in a string of outstanding Costa Rican professionals that it was a real privilege to meet.

Between trips into the jungle, Favio took us on a tour of the lodge grounds: 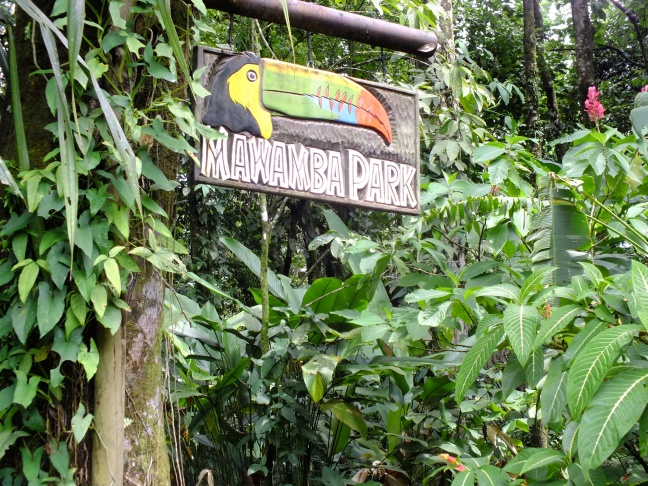 Yes, the lodge has its own park. Here are some of the things you can see: 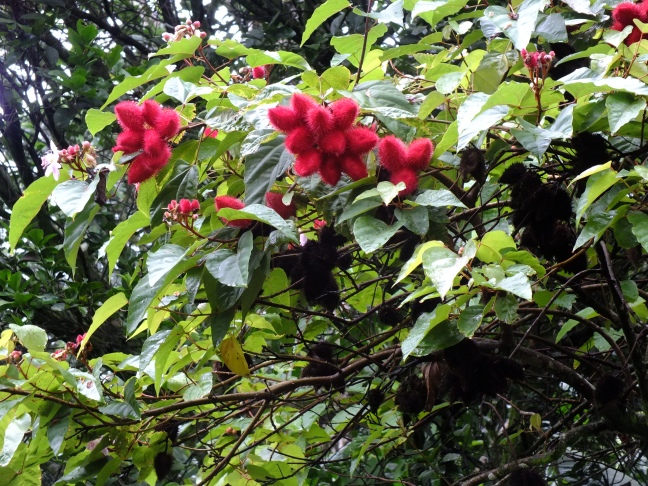 These look like the sweet, yummy mimons we had eaten earlier. Not so fast! 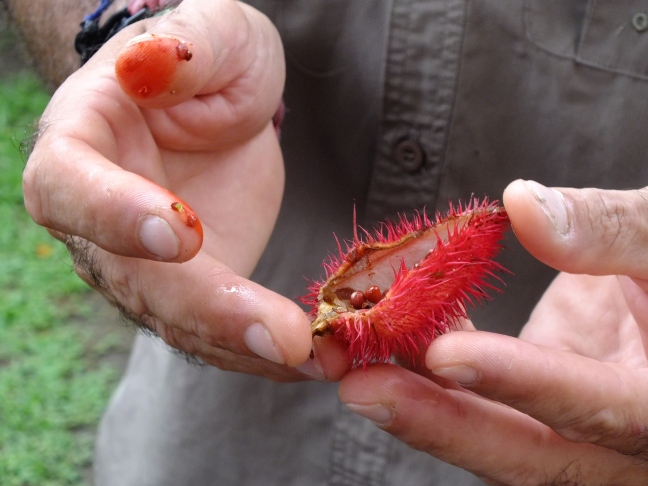 Instead of the candy-like insides, there were berries instead. Turns out these are very different plants and the berries are used for red dye. 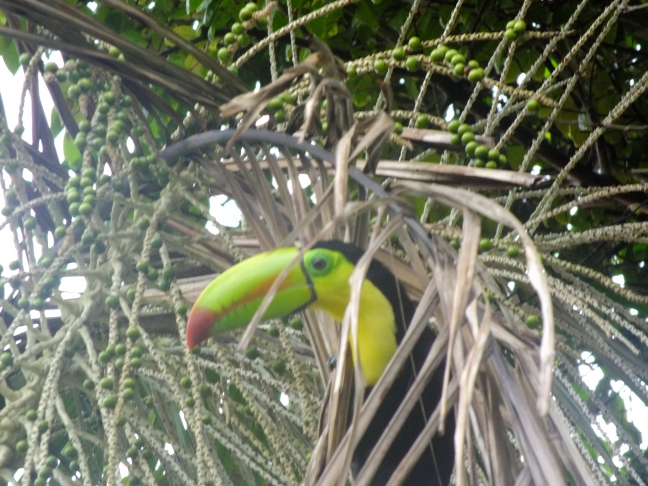 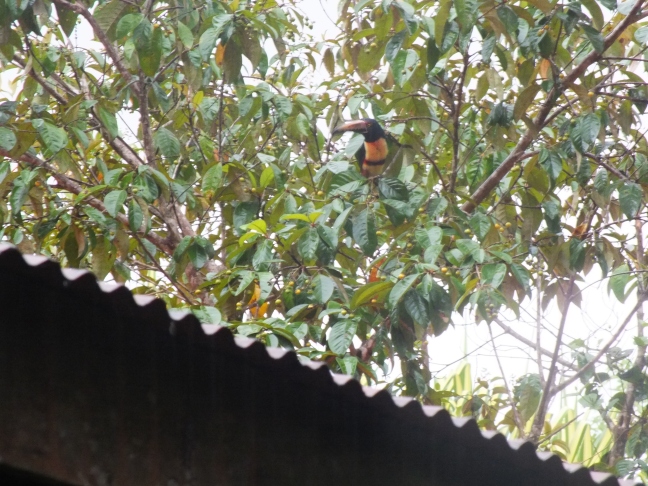 They also have three houses to support wildlife in the area: one is a butterfly house 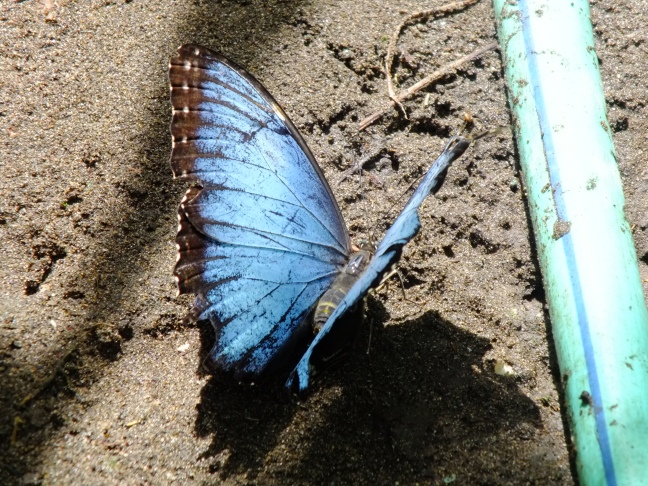 And the other is for amphibians: 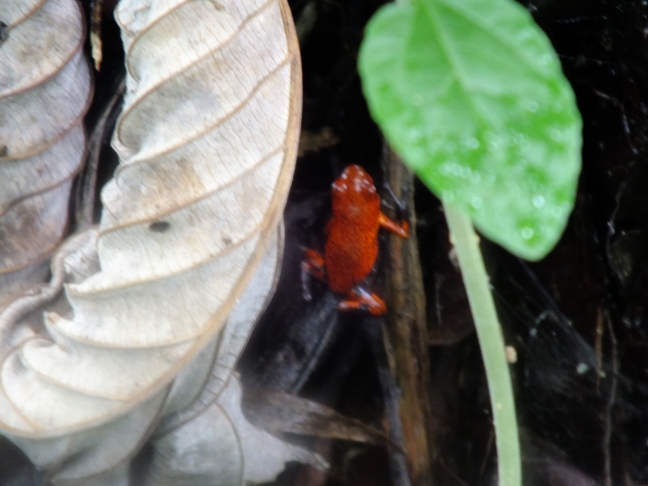 Speaking of frogs, Favio found this guy sleeping on a leaf: 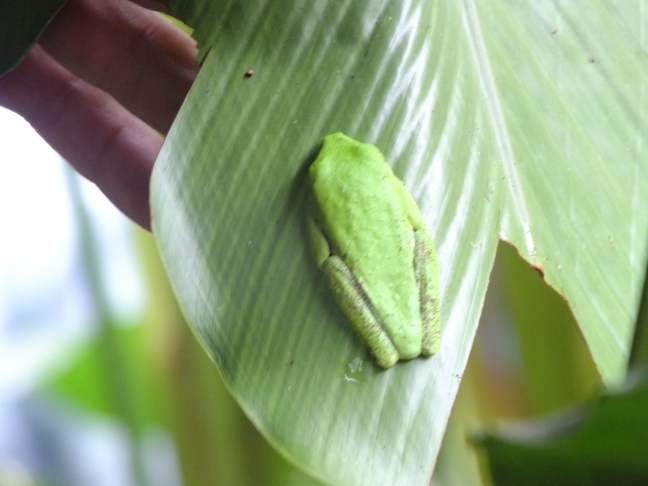 He’s just like any of us when the nap is just a little too short! 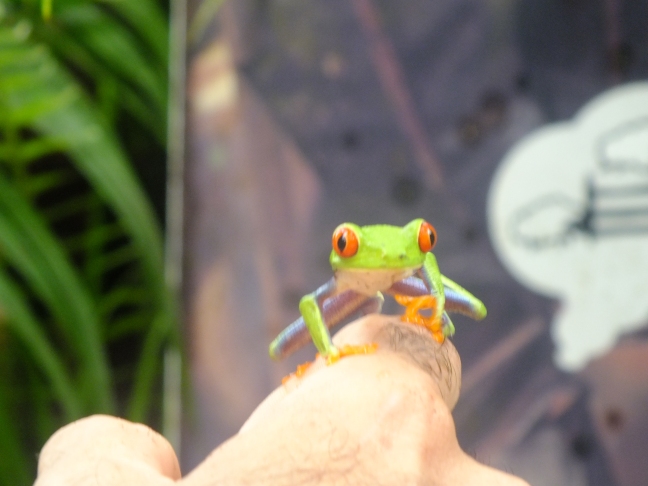 Well, after three tours in one day, it was time to rest up for the Great Turtle Hunt!