The other couple who were with us did not sign up for the Volcano hike, so we dropped them off at their hotel. Now it was just Dianne, William, Edgar and me. We drove back through La Fortuna and around the volcano to the entrance of a national park. William and Edgar took us past the tourist drop-offs and out to a trail head where there were no other people. William pointed out the tour buses we could see below and said we would get a jump on them. The three of us got out and Edgar drove off to park the van and wait.

William pointed out that we had come around to the charred side of the volcano. From La Fortuna it looks green much of the way up. But this side was blacker with considerable erosion from the rains.

Well, Dianne and I had already climbed 1,000 very steep steps, so we were a little leary about this hike. It started out easy enough:

We started walking an easy path across a very bucolic pasture. Not to go too far off topic, but here is something we saw all over Costa Rica.

Whenever farmers want to fence in a field, they just go along and stick these roots into the ground every 10 feet or so. Then, in about three months they grow into trees and, ouila! Instant fence posts! Sure beats the post hole digging from the days of my youth!

Well, anyway, it didn’t take long till the path became much steeper and rockier:

Fortunately, someone had made a trail through all the rocks, which, of course, are all lava, thankfully well cooled. 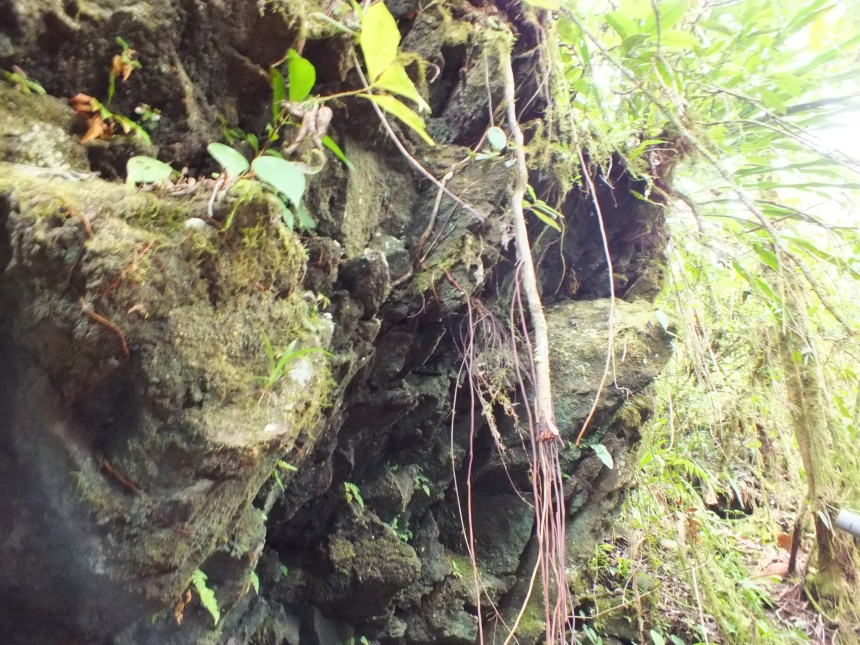 Now the path had become quite steep. Fortunately, William knew the kind of couch potatoes he was dealing with, so he stopped often to tell us about the medicinal properties of even more of the plants along the way.

Finally, we reached our destination, a clearing with a great view of Lake Arenal.

And the hotel where the movie stars stay. Will Smith (or somebody) paid over $1K per night for a month while filming: 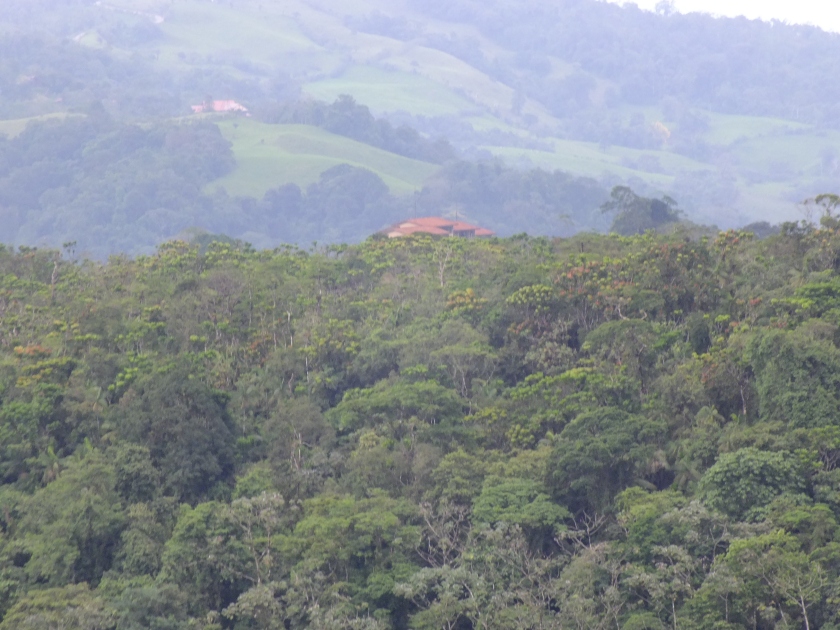 In the 47 years since the great eruption here is how much vegetation has come back: 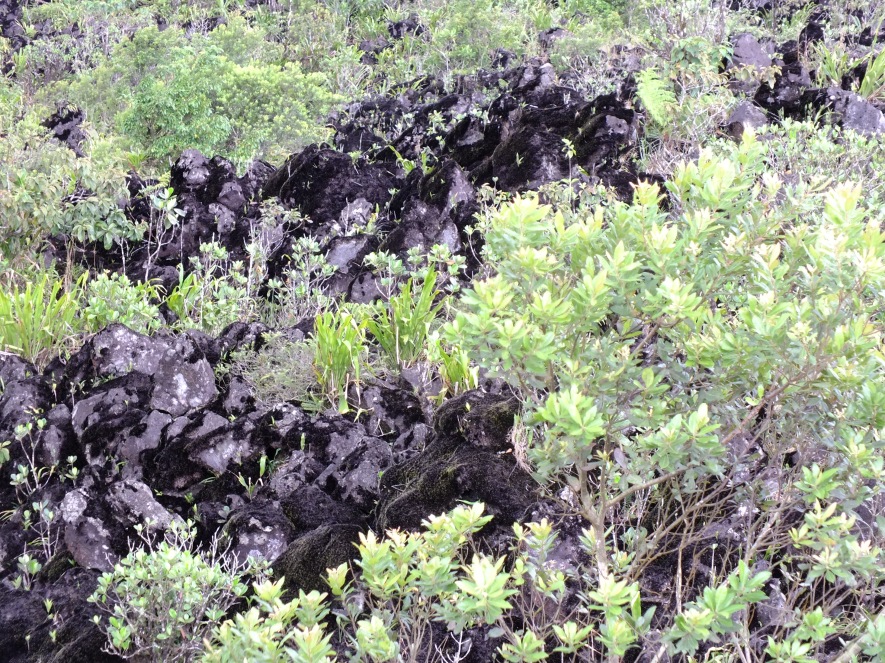 One of the most interesting sights from up there was this lake, created after the initial explosion of the volcano launched a bus sized boulder into the air. This, of course is where it landed. 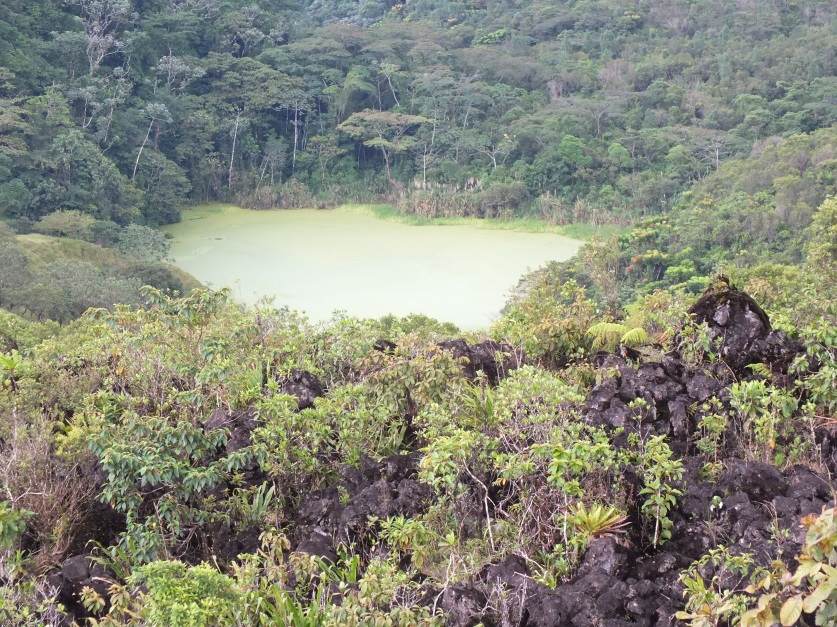 William was kind enough to take a picture of a couple of Sherpa’s he found along the trail.

Then we began our descent. 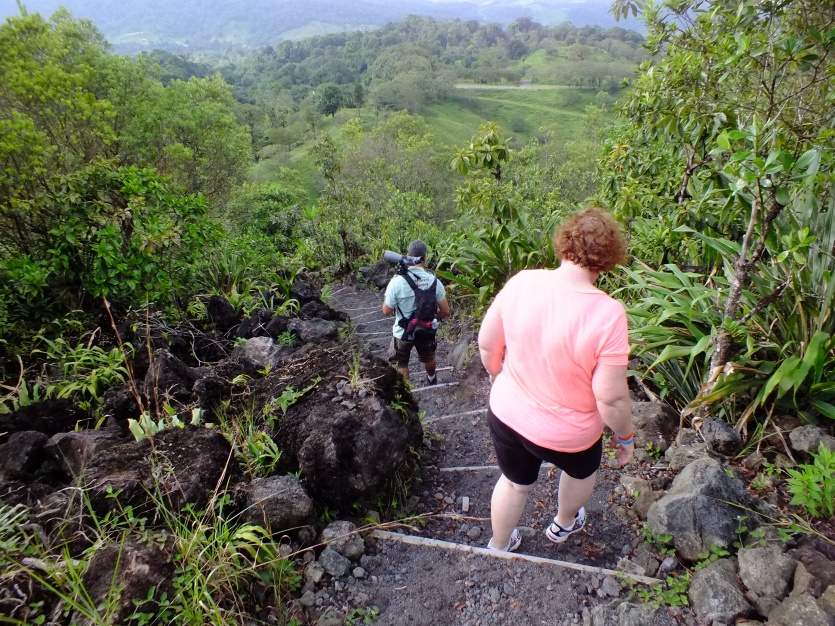 Along the way, William pointed to a distant speck, which he explained, is the white roof of the park’s visitor center. We had the option of hiking down there, or, he could call Edgar and have him pick us up at the trail head We were not crazy about  a hike of that distance, but we told him the only thing we hadn’t seen that was high on our list was toucans. I asked if we could just walk the road up here and find some and then Edgar could pick us up on the road. No problemo! So off we went.

And what a pleasant walk it was, just the three of us. We had a chance to just talk and enjoy our time. Once again, he started describing the plants, the birds and the trees we were seeing. Then he stopped in front of a tree, pulled out a knife, and stabbed it about six times. Immediately, from each wound, a white liquid began to flow. It was a rubber tree! How great it is to see something you’ve heard of all your life but never experienced!.

Except for the light bark it looks (to me) like any other tree in the forest. But, no!

Now, you may ask, why is it on fire? William was illustrating a point that even in a rain forest, IN the rain, you can still light latex and start a fire. Good to know! 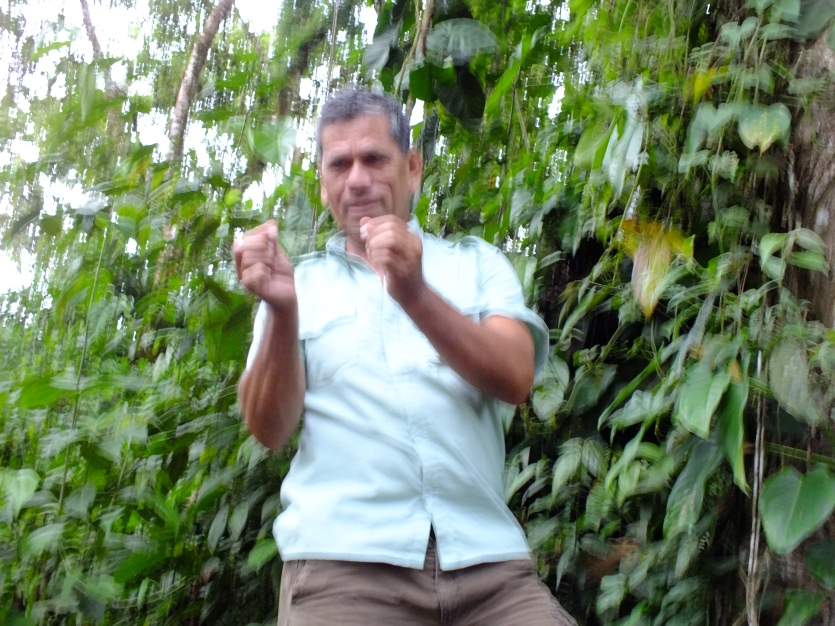 William stretching some latex. He said that, growing up in the forest, if a kid broke a leg or an arm, their mothers would make a cast by coating the limb with multiple layers of latex. That’s what he said. I’m no doctor.

We walked a little farther, and, finally! 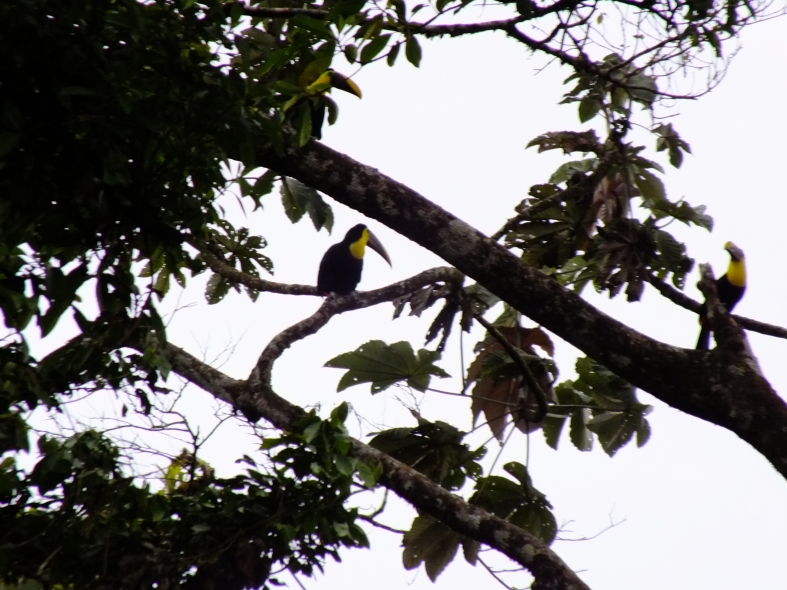 Toucans! They don’t have much of a song. More of a chirping sound. But, they sure are beautiful!

So, with the mission accomplished Edgar soon arrived to ferry us home, the perfect end to an extraordinary day. Getting to spend so much time with these exceptional people was not only a pleasure, but a real privilege, for which we are grateful. It is an experience we will never forget.