Well, it was finally time to say goodbye to Monteverde and head for Arenal We had been promised an even rougher road and Costa Rica did not disappoint!

Not exactly what one hopes for in a main highway. But, at least we were in a vehicle better able to handle it:

This time we had almost a full size bus, with lots of people heading our way, most of them youngsters.

But even a bus has its challenges: 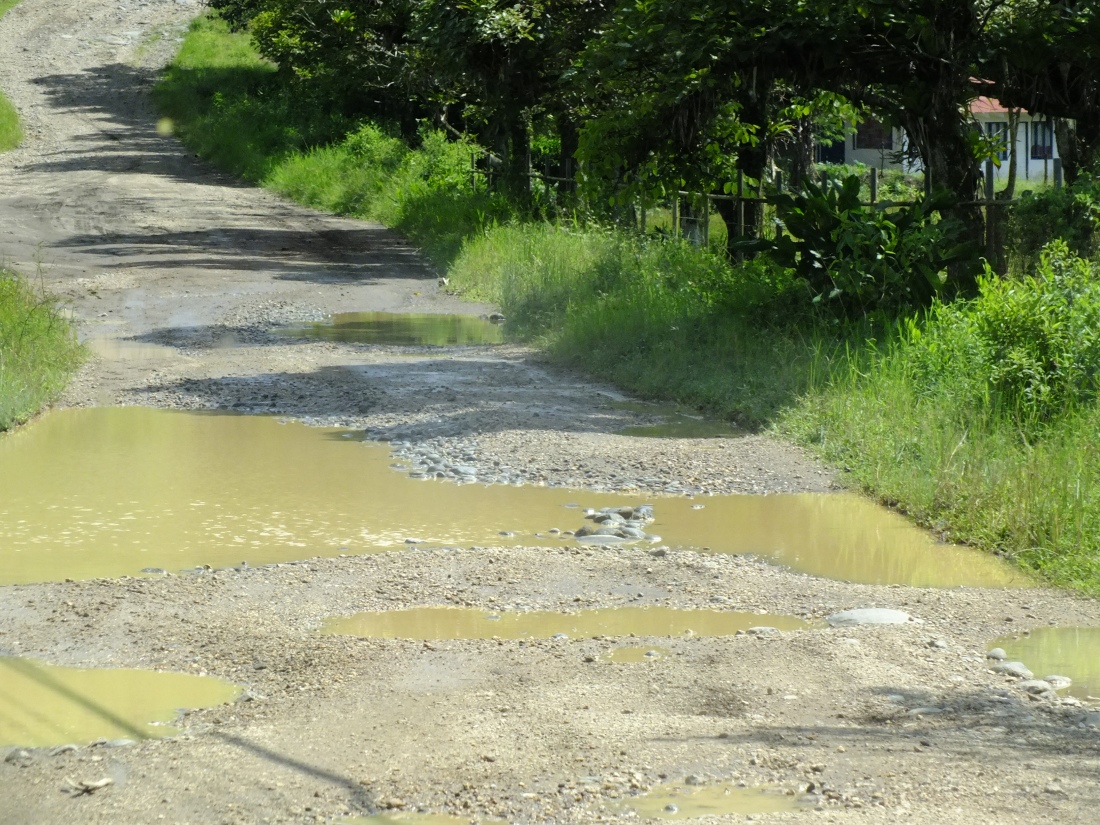 So, map fans, here is where we were going: 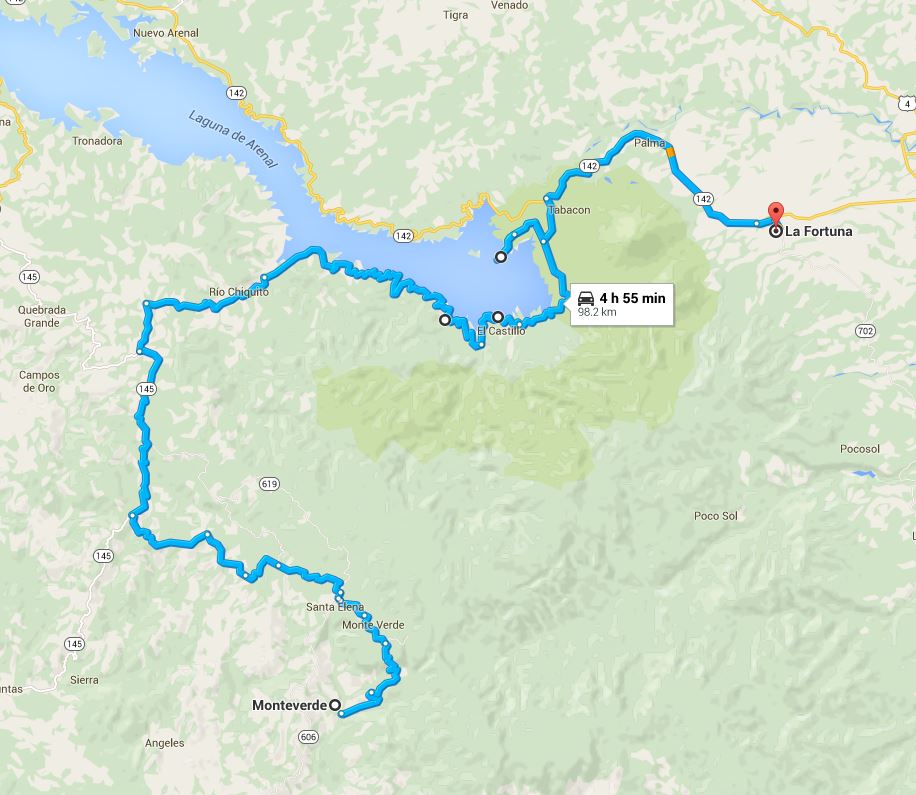 At least this is where Google Maps thought we were going. In reality, we were told as soon as we got on board that we would be crossing the lake by ferry and would be met on the other side by people who would take us to our final destination, in our case the Volcano Lodge.  And, in spite of the bumps, there was some beautiful scenery along the way. 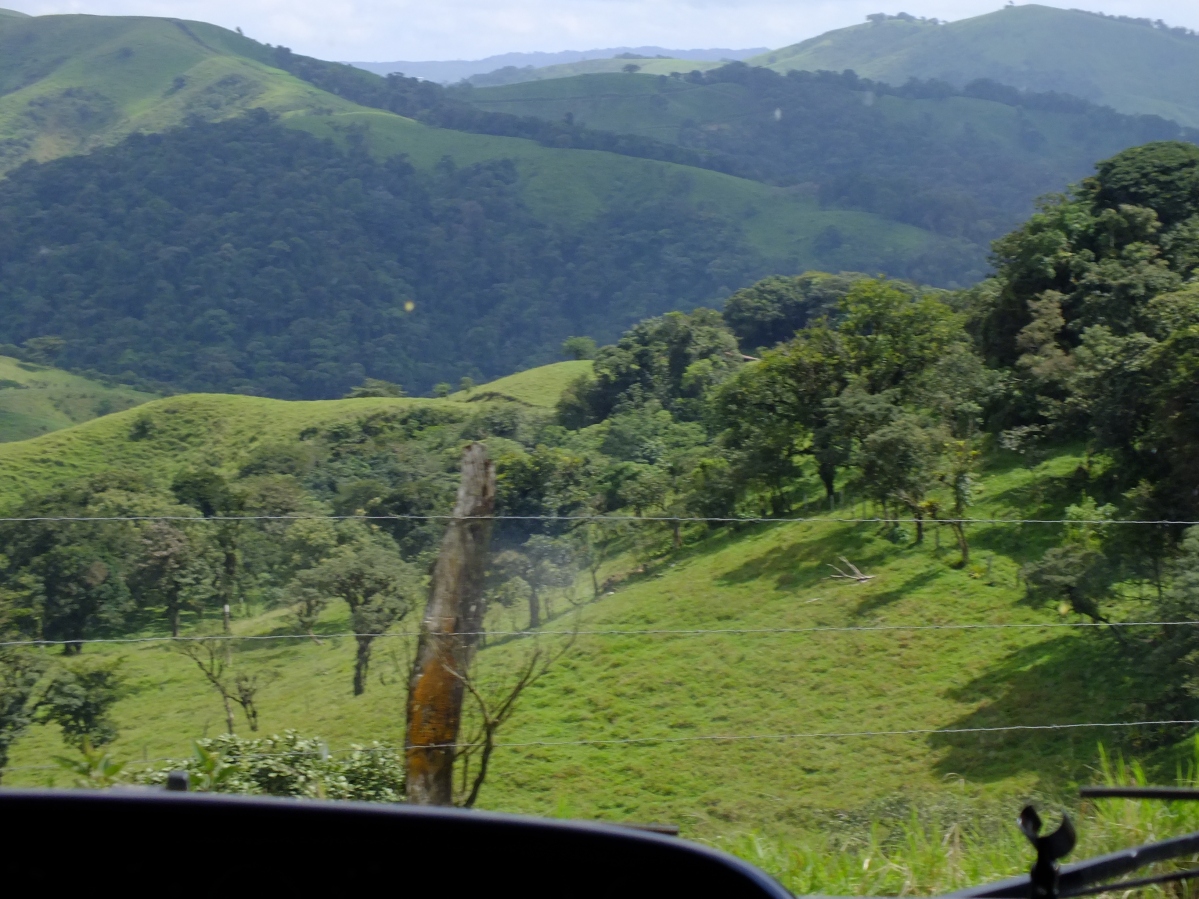 After a couple hours of sightseeing we stopped at this restaurant for snacks: 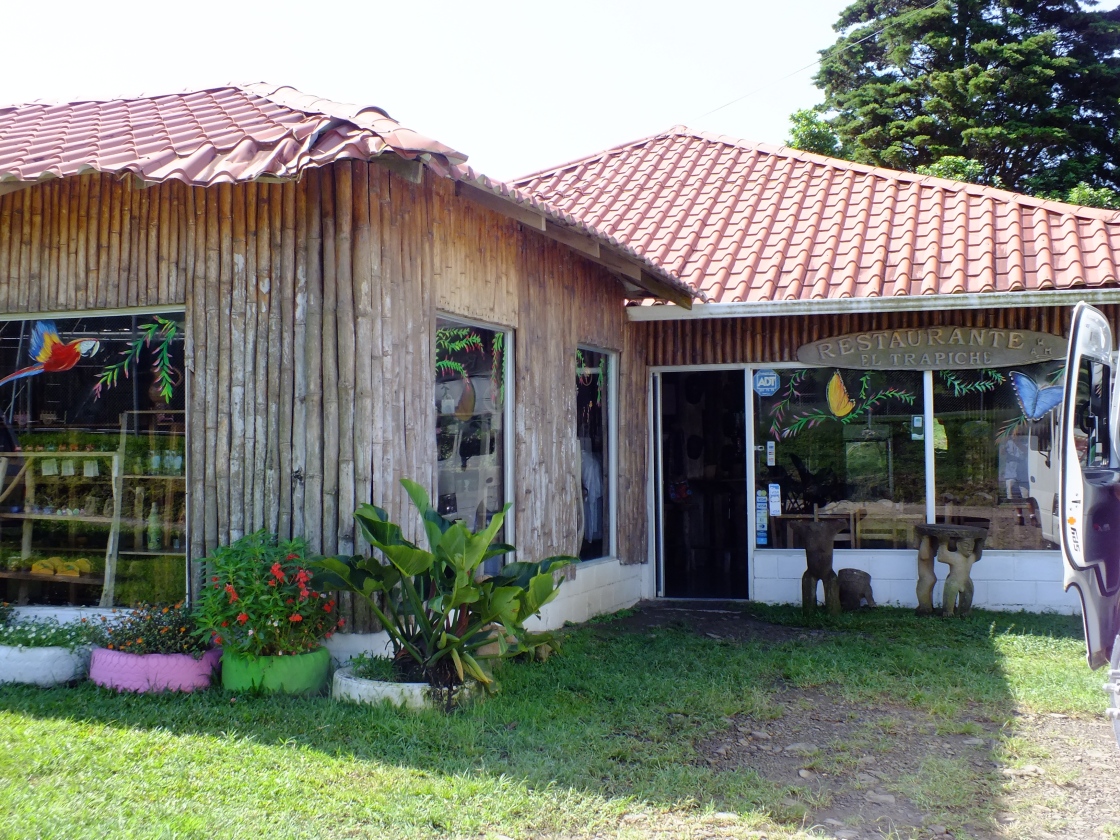 Bamboo was definitely the theme for this place. Some other buses pulled up as well so we had time to chat with a few Americans. We had long been in the minority. Most visitors are from Europe or Australia. We even met a couple with whom we had hiked the cloud forest. They were headed somewhere else. Small world!

Then is was back on the road. In a while we came upon a wind farm.

Then we came to a small village. And here is a scene we saw repeated time and time again regardless of where we were in Costa Rica, a parent (usually the mother) walking a child to school. VERY nice to see.

Here is the school.

So anyway, we are driving for another hour or so and all of a sudden we see a big lake. In a few minutes the driver pulls his bus beside a metal shack and announces that this is as far as the bus goes. We would be boarding a ferry.  At the top of the picture is where our bus was. At the bottom is our boat. The cement slabs are the extent of capital improvements in the area. It is a dirt trail down the hill. Fortunately these young boys volunteered to help us with our bags, which we greatly appreciated. We gave them each 1,000 colonies (about $2) and they were pleased as well.

We had no trouble finding our bags later:

Actually it was a pretty nice boat:

And a very fun and scenic ride it was! By the way, whenever we travel we generally try to represent the US in a positive way. Glad to see that this spirit has found its way to the younger generation as well. For example here is one of the guys who crossed with us.

As we got closer the clouds almost came off:

Before long, we started to head for our dock, which, as it turned out, was a bunch of rocks in the water leading to another dirt path. Our vehicles were above waiting for us as promised:

Soon we were speeding away to the Volcano Lodge on nicely paved highways. We would not ride another gravel road the rest of our time in Costa Rica.