The only thing I knew about the Falkland Islands was I remembered their war back in the early eighties when Argentina decided they would like to have them and the British, who had claimed them long ago, took exception to that idea. But, when I found out we would be going there I got on the internet to see what was going on.

The Falklands consist of three large islands and many smaller ones. They have one principle village, Stanley, and some very rugged countryside. Mostly it is an island of large private farms, one of which might have, say 10,000 plus acres. But, when your principle crop is big rocks, you better have 20,000. Fortunately, between those big rocks enough grass grows to raise sheep and that’s mostly what they do.

BUT, at some of these farms that extend to the sea, and at some public parks, there are penguin rookeries. Naturally, at one of the most distant points from Stanley lies the biggest of the rookeries, a place called Volunteer Point. And, it features King Penguins, the biggest of the penguins outside Antarctica!

Well, as had happened on all other previous occasions, the ship’s excursion to Volunteer Point was sold out long ago. And, Travel with Alan didn’t have any excursions in the Falklands at all. So, the search began. Fortunately, through Trip Advisor, I found a company, Estancia Excursions,  that gave highly rated tours. So, I sent them an e-mail right away and, to my surprise, they had space for us. The deal is, we have to be on the earliest possible tender off the boat AND we would need to pay them cash in British pounds. Dang it! i had already exchanged currency for Chile and Argentina. Since we were only going to be in places like the Falklands and Uruguay for a brief time I saw no point in going through the currency hassle. Those good ol’ USD’s speak a universal language! Everywhere, that is, except the Falklands where, after another exchange of e-mails, I was advised that there is only on bank on the whole island and they charge big fees for everything. So, yes, they would take my Yankee Dollars, at a mere 20% extra!. So, British pounds it would be! And off to the bank I went again.

Sometimes when cruise ships visit Port Stanley the weather is so bad they can’t maneuver safely in their port and they end up having to pass by. That has happened to the Zaandam on previous voyages this year. But, once again, the weather favored us and in we went! 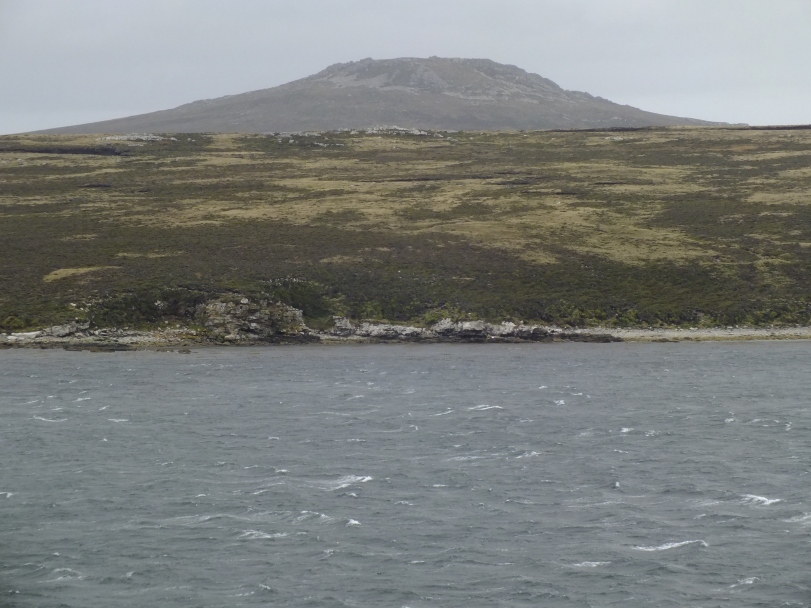 Well, we were far from being the first people off the boat. It took so long to get to shore that I had given up hope the tour people  would still be waiting for us. But, sure enough, there they were! Before long we were piling into a Land Rover. These vehicles will seat four people comfortably. There were five of us. Off we went!

We were only a few miles out of town when we came upon this:

Not a very good picture, but what you see are some guys in neon suits out in a field. Turns out they are locating and removing land mines left over from the Falklands War. Incredibly these guys have come from Zimbabwe all the way out here to clear mines. I mean, how bad does the economy back home have to be to make this job seem even remotely like a good idea? But there they were.

To make things even more challenging, the mines are housed in plastic, so metal detectors don’t work. The British themselves attempted to remove them right after the war, but the casualty rate was so high they gave up and just roped off large areas which have remained closed now for 35 years. Fortunately the Argentines left behind maps showing where they had put the mines. There are over 20,000 of them in various locations, including one of the best beaches on the islands. Now wouldn’t you think that if you lose a war you should have to clean up your own mines? Apparently that’s not how things are done.

Well, we passed the mine field and then got a look at some of the local terrain:

Each of these rocks is about the size of a dining room table. Their value as an export item has yet to be discovered.

The nicely paved road on which we were traveling soon became a nice dirt road. We continued on our way for about an hour. The driver was in radio contact with his other drivers, one of whom was his daughter. Finally we came to a farm house. He said we would wait here until she caught up with us.

About ten minutes later she showed up in her Land Rover and our driver looks at me and says she has an open space in her vehicle and the going would be easier if there was less weight in his. What the….? You know, he could have said, sir, there’s an open space in the other vehicle and you’d be much more comfortable, etc. Well, Dianne decided she could manage without me, so off I went. I even got to sit in the front.

What our first driver also should have said when he pulled up the the farm is, “This is the end of the road”, because that, in fact, is what it was. For the next seven miles it would be this: 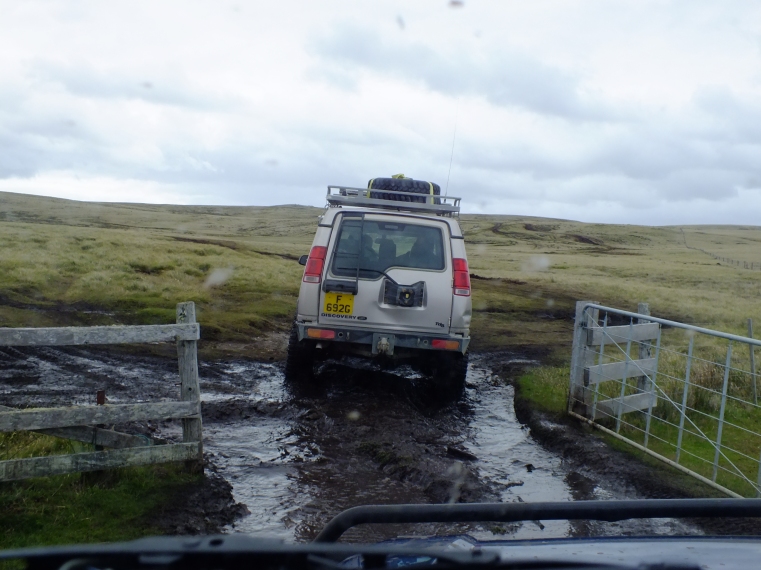 Dianne’s Rover ahead of us.

Off we go! What was it like for over an hour? Here is a small sample:

So, I asked her if this is public land. Turns out it’s not. It’s somebody’s farm; someone who, I assume, gets to supplement his rock income with tourist dollars. Also, he might make some money selling peat, which most of the land is made of. Some people still burn peat in the winter, but most have gone to the hydrocarbons, or, electric as wind farms are beginning to develop. We found no shortage of wind in our time here.

There has been little or no discussion about putting a road out here. It would be bad for business and, besides, peat doesn’t make a very good road bed. Although I know where they might find some rocks that just might!

At last! We arrived at Volunteer Point!

We were pleased to see that we were not alone:

Who were these other guys? They were the people who had booked through the ship! (And who paid about twice what we had. Ha Ha Ha)

But enough about them. Here’s what we came for!

We started out with the Gentoo Penguins. Many of the chicks were molting and there were feathers everywhere!. We said good morning to them and then headed off to the main attraction, the Kings: 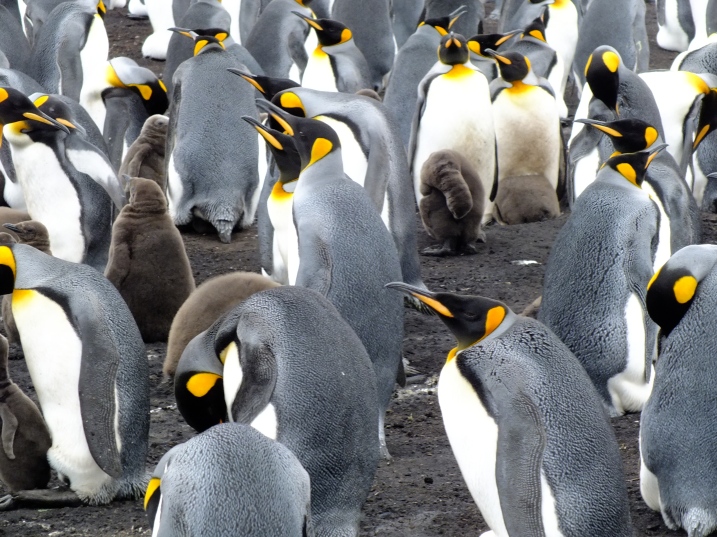 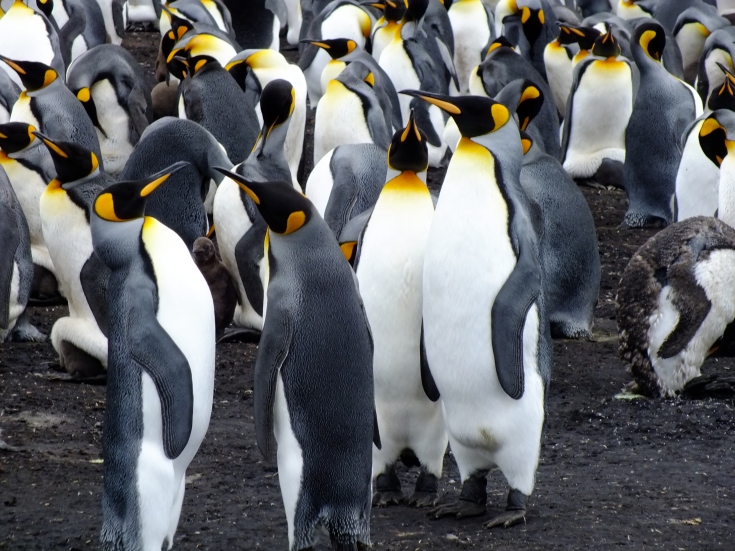 They had an oval shaped area set up that humans couldn’t enter and many of the penguins chose to stay there. But others couldn’t care less about us and went where they pleased. We were quickly captivated by a group of three adults who stood together. The one would use his flipper to whack the other and then the other would do the same. Dianne calls them Larry, Curly and Moe. You will see them in the following videos:

Here is a brief introduction:

Then a more prolonged engagement.

What goes on in a penguin’s brain?

Shortly after the last video ended the one who tried to leave the other two, tried again. This time he was rewarded with a sharp peck between the shoulder blades. Assuming penguins have shoulder blades. What fun these guys were!. But there were also some standout individuals:

Soon it was time for a penguin work break! 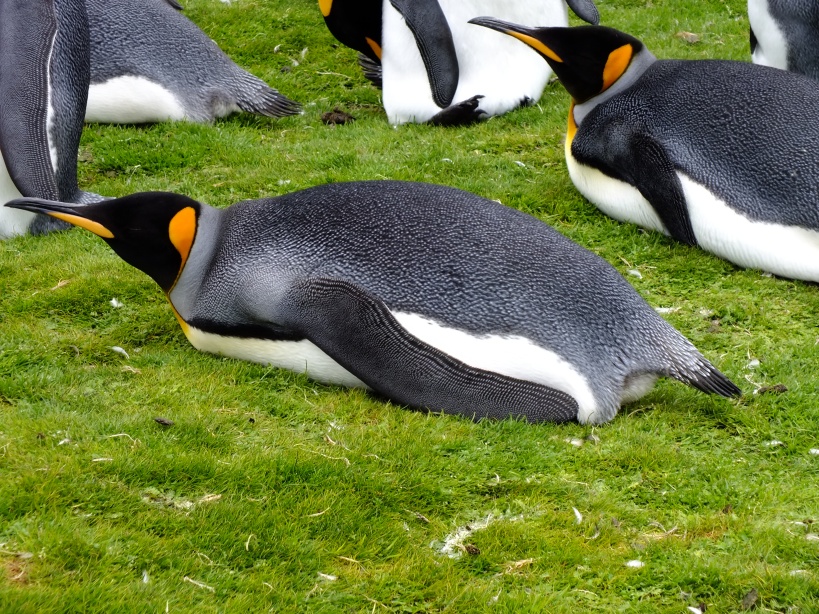 And of course, there is always the required Penguin Patrol!

There is a beach nearby where all the penguins have access to ocean. With great facilities like these, the Kings stay here year-round: 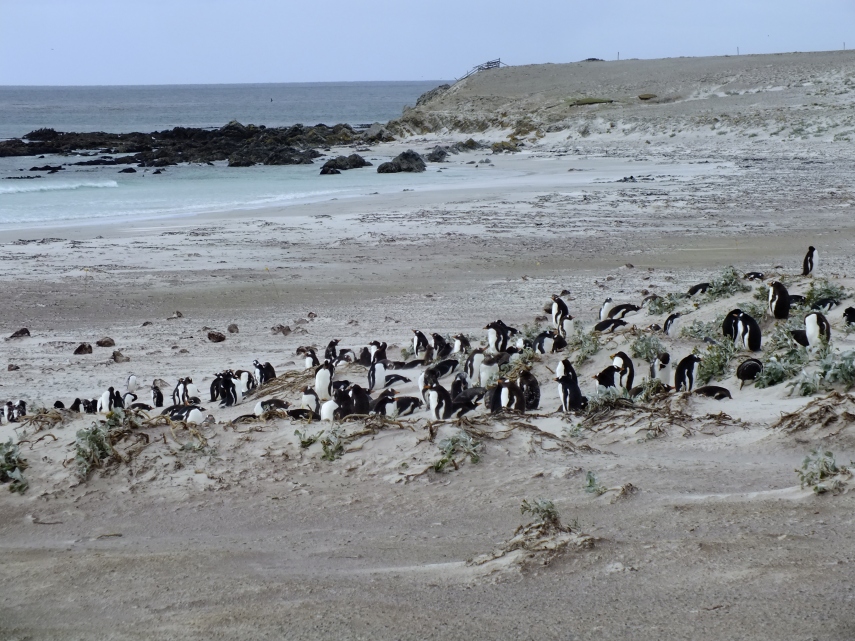 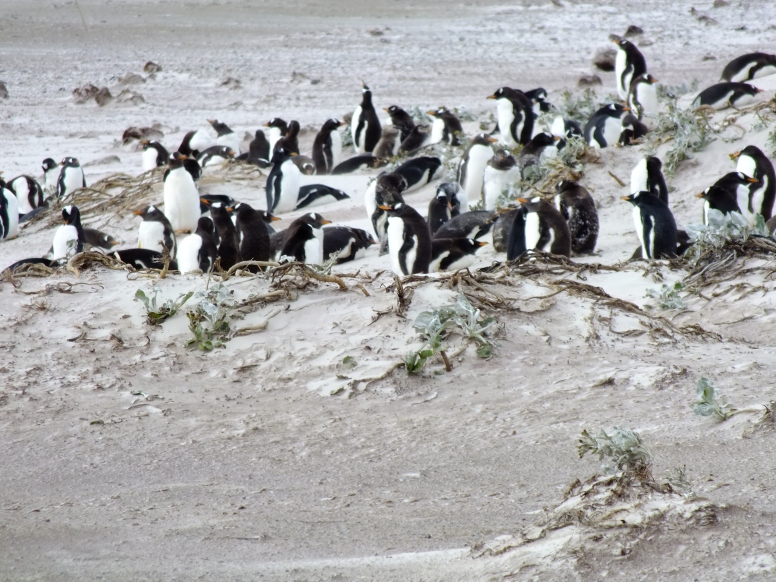 We’ll leave you with a family video:

Was it worth it coming all the way out here? It would have been worth it even in USD’s!!!

Although we were late getting off the boat, the captain never changed the time when we were supposed to be back on board. But we knew for certain he would not leave with his own ship’s excursion out slogging around in the peat bog they call a road. As long as we knew where they were, we knew we didn’t have to rush back.

So, our guide gave us a quick tour or Port Stanley. 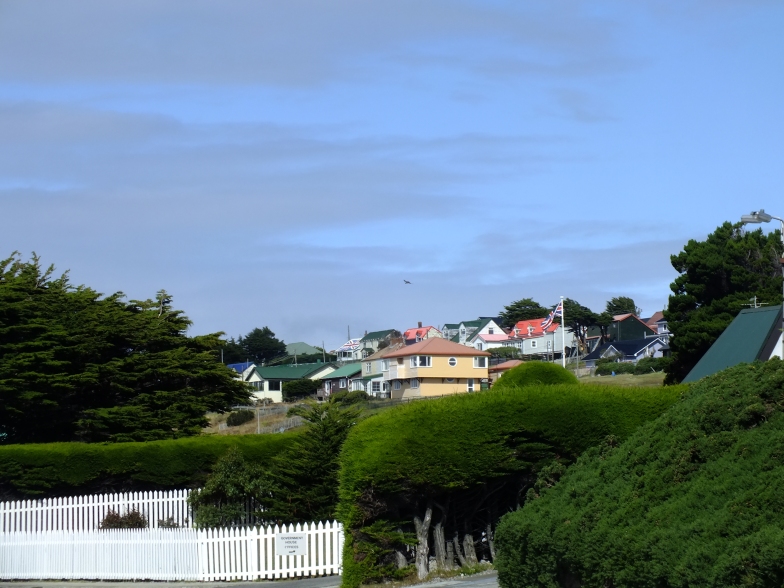 This is a clean, well-maintained community

A memorial to those lost in the Falkland War. Britain lost 255. Argemtina lost 649. 3 civilians were killed. Our guide told stories of grandparents hiding in a barn without food and other stories like that. The war is still very much alive here and, as we later learned, in Argentina where these Islands are called the Malvinas. Recently a statue of Margaret Thatcher was unveiled nearby. 99% favor British rule. 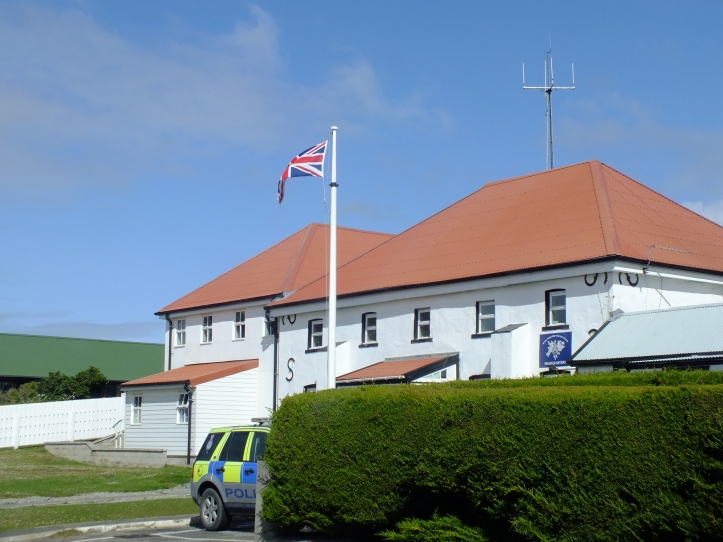 The police station, which has been at this site since 1873. 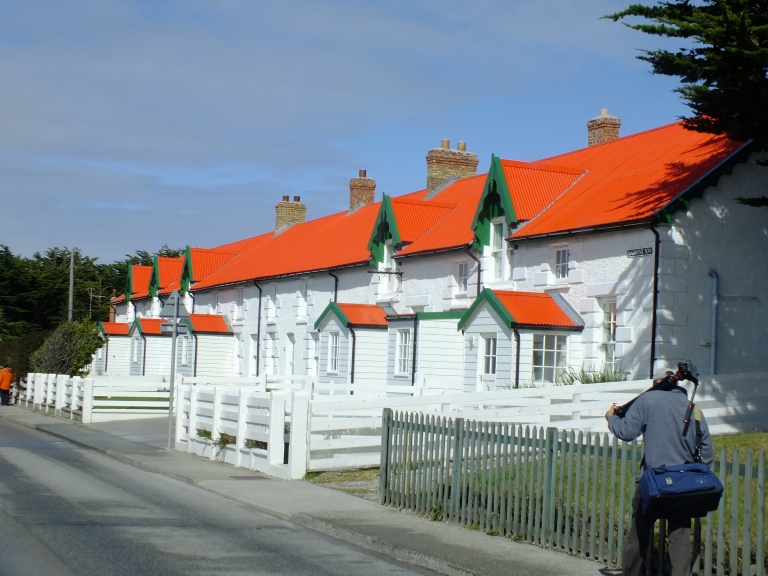 Shops recently converted to condos. Or, perhaps it’s the other way around. We zipped by so fast I was surprised to even get the shot.

The last tender was supposed to be 4:00. We all knew better than that. We got on about 5:30 and we were not the last. Having arrived back on the ship, Dianne began to experience the ill effects of a bug of some kind. For the next two days we would be at sea, so, hopefully there would be time to recuperate .