As you’ve seen  many countries operate stations in Antarctica. And, it should come as no surprise that certain nearby neighbors (and some not so nearby) have staked out claims to Antarctic territory, all of which are now ignored. Ignored? How is such a thing possible? It is possible because Antarctica is the only place on planet Earth that ALL the countries of the world actually get along and live in peace and cooperation.

How is such a thing possible? All you kids out there will remember the IGY, or International Geophysical Year of 1957-58. (I actually do, or, I think I do.) It was the height of the cold war. But people, by some miracle, took the IGY seriously. One of the great outcomes of this event was a treaty was drawn up preserving Antarctica for scientific and non-military purposes. There were 12 original signatories, including the US, USSR, and the UK. There are now 51 countries participating, including China. How did they do it? Eleven simple rules:

This all came as news to most of us on the cruise and the science guys were repeatedly asked about things like law enforcement, verification, and, like what happens if a country who has not signed on decides to set up camp? (Answer, the other countries would put the squeeze on them. And, as you have seen, this is a place where it helps to have friends.) There is no central government, only a treaty administration office in Buenos Aires. Most countries handle their own law enforcement. The US, for example, keeps a couple US marshals down there in case somebody murders somebody at one of the 3 US stations or there is some other foul play.

Well, enough fun facts! We survived the night and woke up to a somewhat hazy and breezy day. Let’s take a look outside! 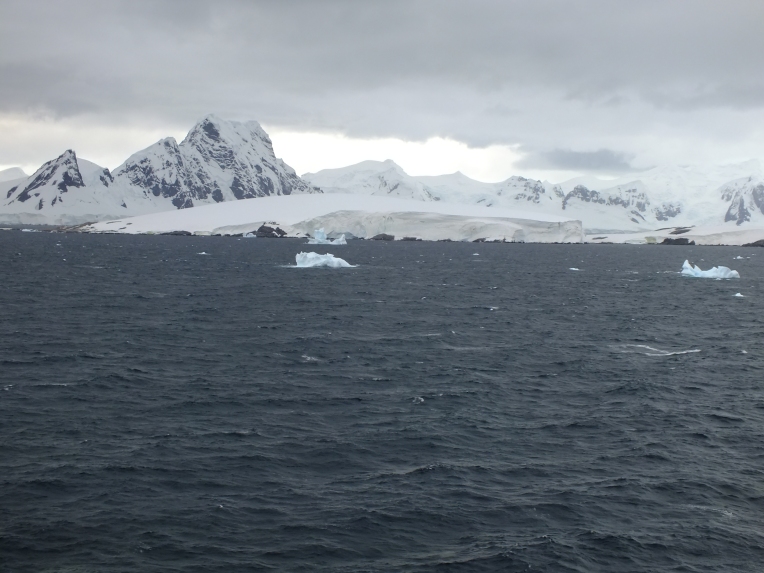 Well, the weather had deteriorated from yesterday, but visibility was still good for a while. We could tell by the spray off the icebergs that the breeze had picked up. 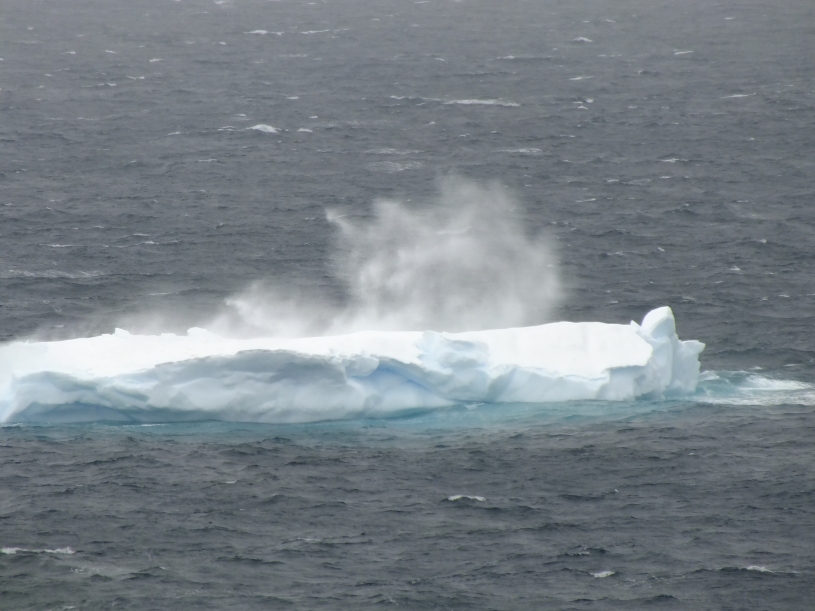 For the bigger icebergs, though, it was business as usual,

As you can tell from the last picture, fog was starting to roll in. Soon visibility dropped to very low levels. As a result, the captain decided not to visit some the the bays and traded them for others. Later in the day we arrived at Deception Island. While, perhaps, many of you think you’ve already been there personally, it was probably some other place. You’d remember this one for sure: 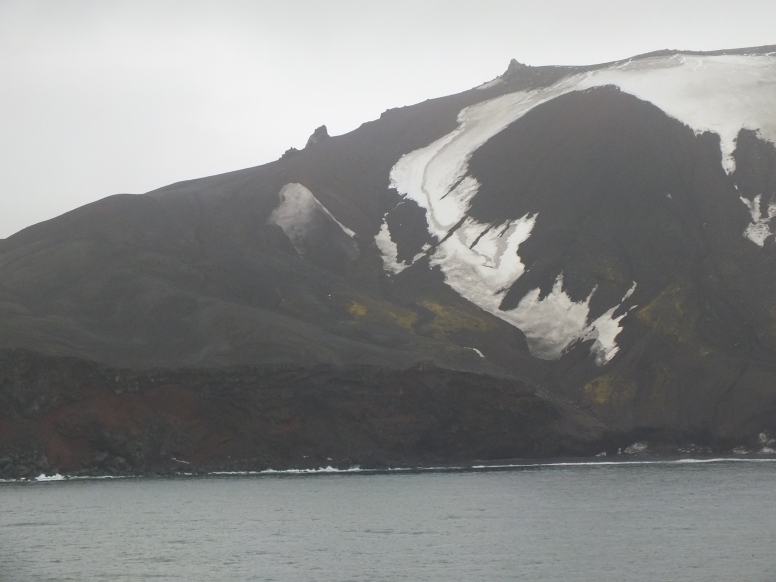 Now, I said I was not going to post any more pictures that were not my own, but they didn’t have a helicopter on board and unless you see this place from the air, you don’t quite get what’s going on here, so, a big thank you to tripscout.net:

Notice anything unusual? Well, no, this is not one of those Caribbean atolls. No, no. This is the caldera of a volcano. And, not just any volcano. This one is quite active, the most recent of many eruptions being in 1970 and with a lot of seismic activity as recent as 1990. But today the green light was on, so in we go! 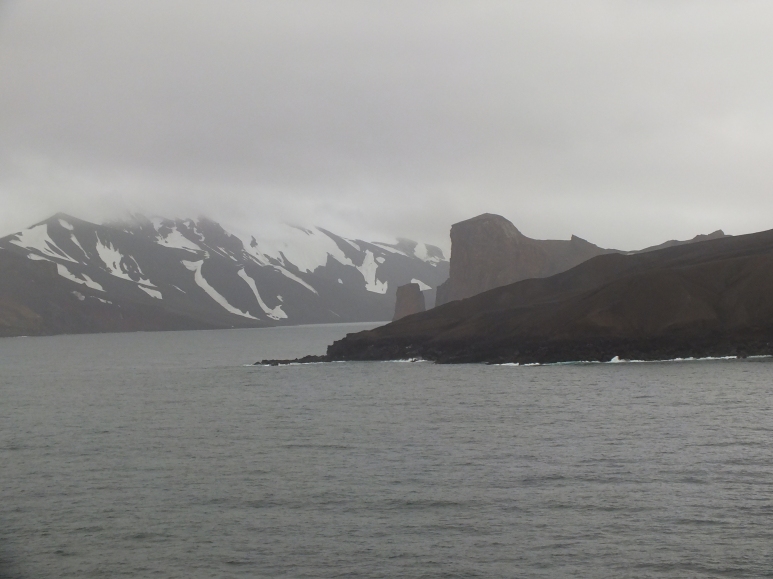 It wasn’t long till we noticed movement on the beach! 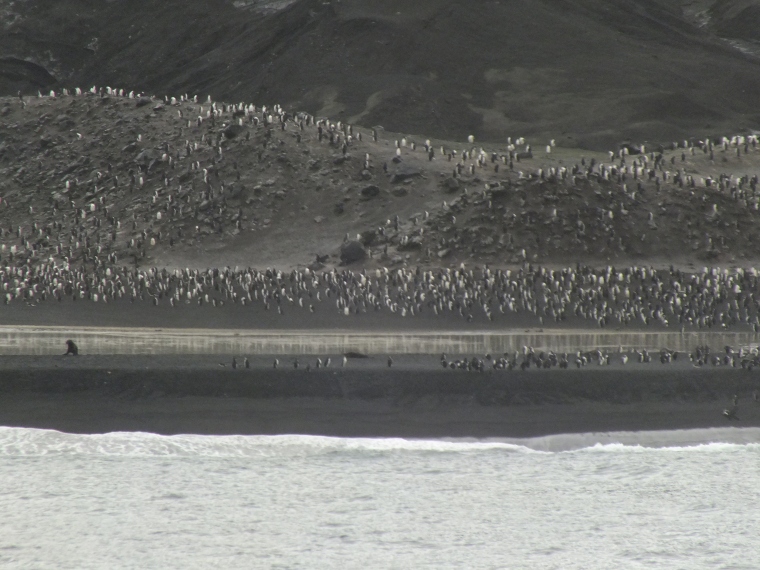 Turns out this place is home to the largest population of Chinstrap Penguins in the world! You will also notice quite a few seals and sea lions lounging on the beach. I later learned that some of the smaller cruise ships that come here will let you off at one of the nearby black sand beaches. They say if you dig in the sand just a foot or two the water becomes so warm you can make your own mini-hot tub.

We were happy just to see the penguin-palooza!

I mean, we are talking penguins everywhere! 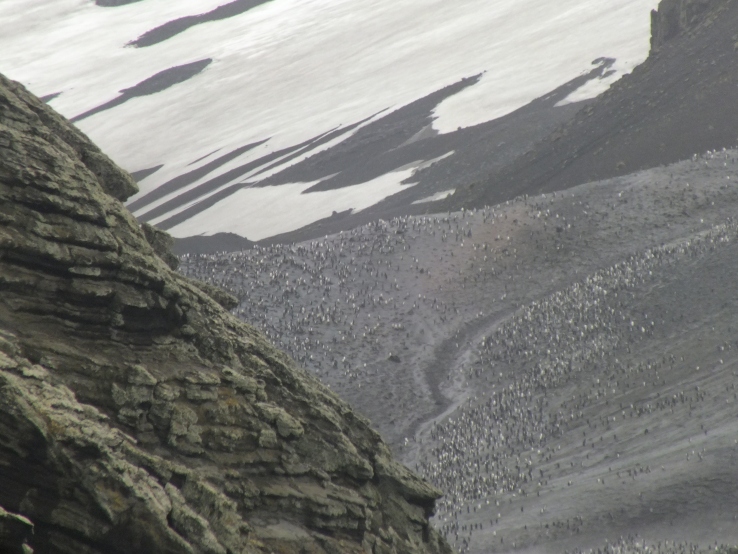 The look even better animated! 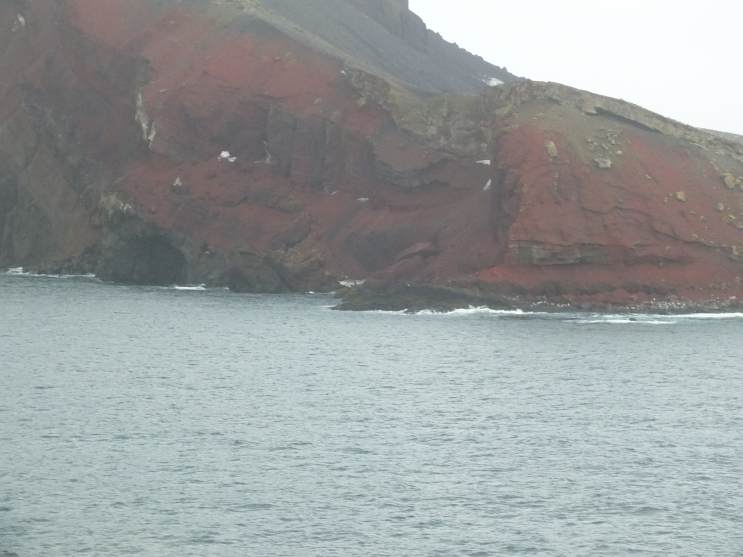 The red comes from lichens, one of the few plants that even grow down here.

That night, the room stewards had a surprise waiting for us!

4 thoughts on “Why Can’t We All Just Get Along?”