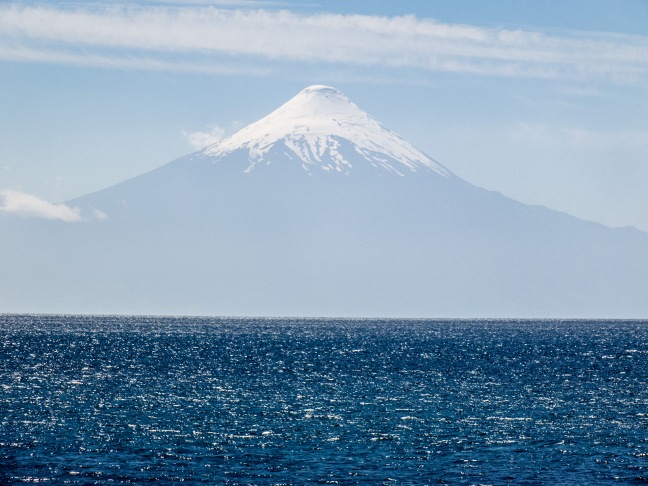 The cruise ship Zaandam, part of the Holland-America line is 785 ft long, 106 ft wide, draws 26 feet of water below the line, and weighs over 61,000 tons. Most importantly, she has automatic stabilizers. She carries 1,432 passengers and 620 crew, almost all of whom are from Polynesia or the Philippines. Of the passengers, I would roughly estimate that a third were German, a third from the US and Canada, a fourth from the UK and Australia and the rest from elsewhere. Those are some fun facts to sort of set the stage.

We spent our first day out of Valparaiso at sea, which gave us a chance to catch up on some sleep and find our way around the ship. It was easy to meet people and we found ourselves playing team trivia games and so on and generally having a good time.

For this cruise, Holland-America brought on board naturalists and scientists who had spent time in Antarctica and even on the first day they began their series of exceptional lectures on a variety of topics related to what we would experience there. It was not hard to believe we were all part of an expedition.

In the evening there were a variety of performers who put on excellent stage shows throughout the cruise. It was never hard to find something to to, or to do nothing at all if that was our preference.

Because we came to this cruise somewhat late, all the primo (and pricey)  shore excursions through Holland Amerca were booked up. We would have had to go on a waiting list and hope we didn’t get stuck someplace with nothing to do. Travel with Alan offered their own excursions and we booked most of them. But some didn’t seem to offer much, compared to what was in the area. One of those was our first port of call, Puerto Montt. I decided to rent a car instead and strike out on our own.

The problem with renting a car in Puerto Montt was, we were there on a Sunday. Had it been a weekday we could have rented the car in town and off we would go. But, because it was Sunday we had to rent one at the airport, which, on Google Maps, didn’t look to be far out of town. I reserved a car with Hertz, online.

Puerto Montt is a “tender port”, which means the ship doesn’t pull up to a dock. Instead you ride the ship’s lifeboats to a small pier. This process takes a long time and it is easy to start your day late before you even get to shore.

As it was explained to us, once we get on shore there will be a terminal where you go through security, then there will be a bunch of people wanting sell tours, then there will be taxis. So, my idea was, we would take a taxi to the airport to get our car. Well, when we got to the shore we found the terminal, and the guys selling tours, but no taxis. From within the tour group, however, was a guy who looked like a taxi driver, so, in my fluent Spanish I walked up to him and said, “Aeropuerto?” We each said that word a few times, then he said “Si!” and motioned for us to follow him. What he took us to was not a taxi. It was a car that was neither clean nor in all that good repair. But, he repeated “aeropuerto” a few times and motioned us in. What could possibly go wrong? We climbed inside and off we went.

Well, Puerto Montt is a pretty good sized city, about the size of Mansfield, and quite hilly. And, it shows few signs of prosperity, although we’ve seen far worse. Soon we were zig-zagging through streets and things were not looking good, when all of a sudden we passed under a green freeway sign with the word “Aeropuerto” on it. That was a relief.

As time went on we passed under any number of such signs and it now became clear that the airport was quite far out of town, and now I was wondering if we were going to the right airport. About a half hour later, lo and behold, there’s the terminal and there’s the Aeropuerto! We pile out and I say, “How much?” In the manner of everyone in Chile, he holds up a calculator with the number 65 on it. So now I’m thinking, 65,000 pesos. How much is that US? (Correct answer $104). Well, I don’t know the correct answer but I do know that it seems like a LOT! Then he corrects me, “No $65 US dollars”. Well, that also seems like a lot. He helps me count that out in pesos and I at least know enough to know the count was close to right. But, I end the transaction still feeling screwed. I consider my options: 1) argue with him in a language I don’t even pretend to understand, 2) bring in law enforcement who well may not be in the Gringo Customer Relations business and who might raise questions about my US leftist activities while escorting me to the REAL Castillio El Diablo. I choose plan 3) None of the above.

So, I’m none too happy, but soon we find ourselves in the car rental section of the terminal where, at the Hertz window there is no one there! The other companies have people, but not Hertz. We wait fifteen minutes, then I start asking the other guys. They say he will show up eventually. A half hour later, he does. In no time at all, I am behind the wheel of a rattletrap subcompact whizzing our way down the highway to Puerto Varas! 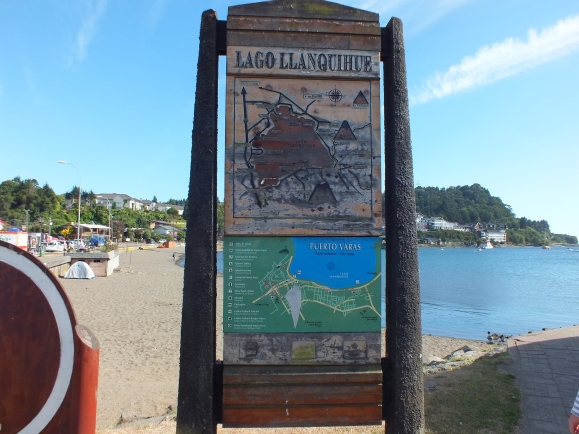 Puerto Varas lies along the shores of Lake Llanquihue one of the largest lakes in Chile. It is a German settlement dating back to the early 1800’s. The dominant feature of the lake is the thankfully dormant Volcan Osorno (top picture), which looks remarkably like Mt. Fuji. But it’s a little hazy and the view of the volcano from this town is not the best and will be likely better from the next place we will stop. We see some of our Travel with Alan buds and find that their tour is just pulling into town. We spend a little time exploring the village, which is very clean and nice. 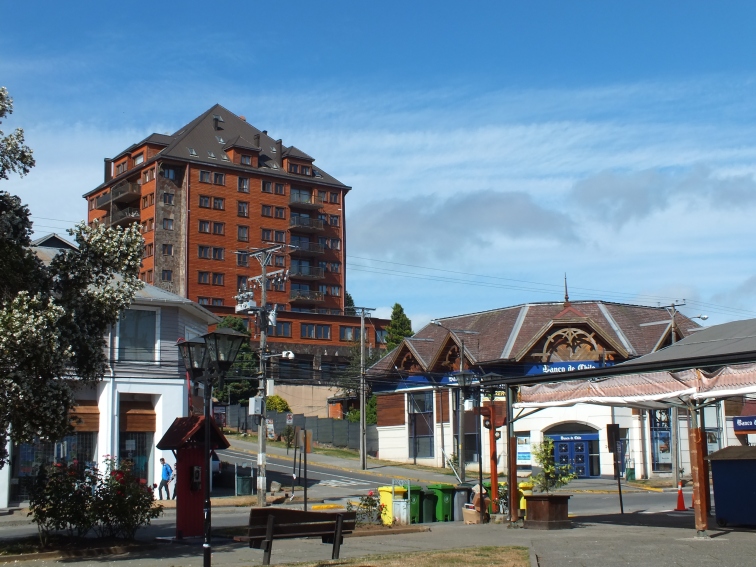 We are just getting ready to leave town, when all of a sudden I look across the harbor and see this: 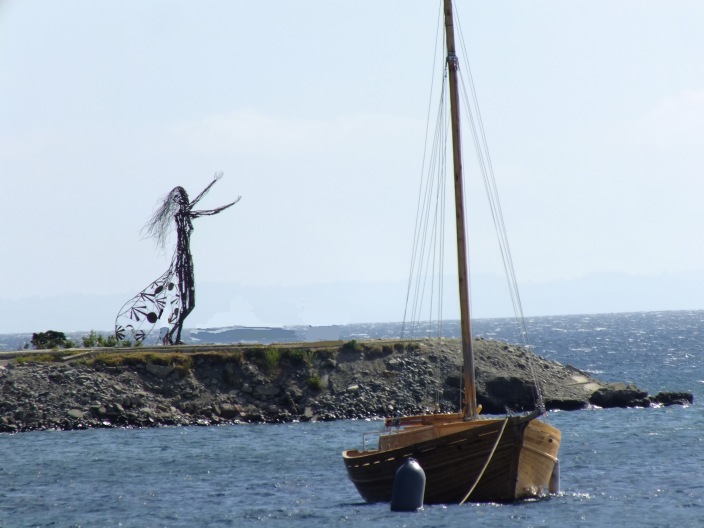 Now, people, in the days to come as we round Cape Horn and cross the Drake Passage we will be sailing over the bones of literally thousands of men who tried these waters and never made it home. I have read book after book about them. But there is very little written about those they left behind. Here, in one piece, is all the fear, desperation and anguish of those who would never see their sailors again. She is made mostly of re-bar, we found out when we went out there, but there was not sign. I thought I’d be able to find something out about her on the internet, but so far no luck.

From Puerto Varnas we were soon off to the lovely village of Fruitillar, another German settlement. This is much more of a resort area with a very active arts community, including an art academy, the Teatro del Lago: 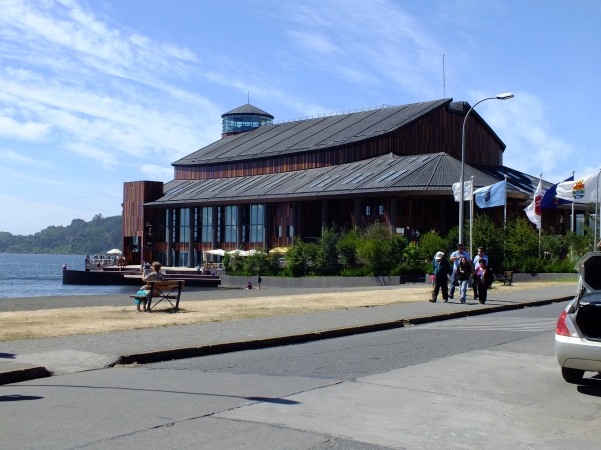 But we also get a good close-up look at Volcan Orsono:

There are many quaint houses with beautiful flowers 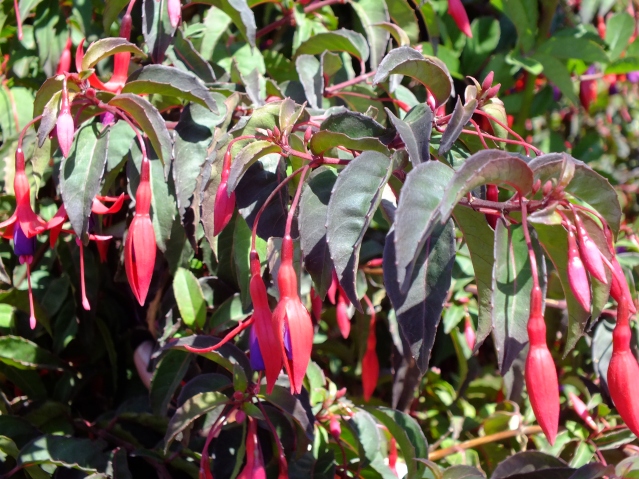 We had a very nice lunch at the 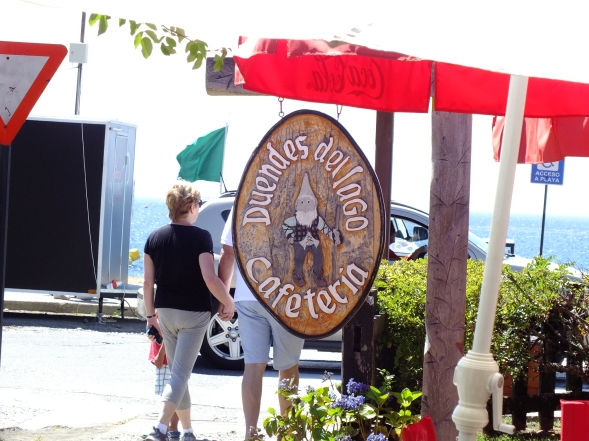 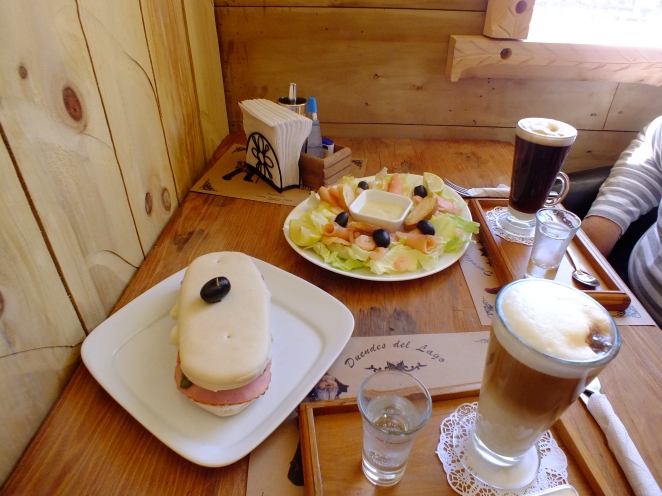 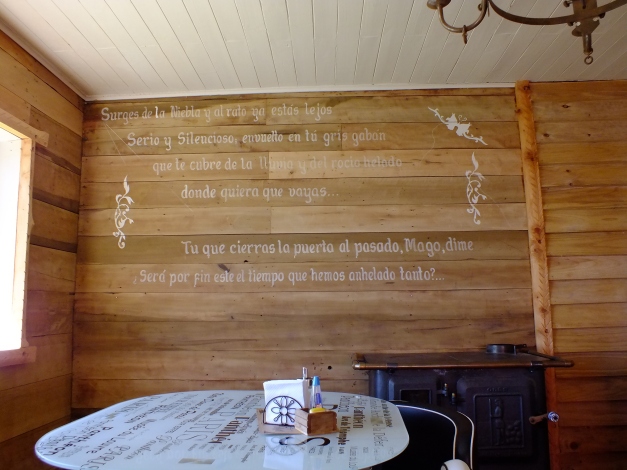 On the wall are these lines, either from a poem or a play. According to Google Translate, the last lines are, “will you close the door to the past, Mago, tell me, will this finally be the time we have longed for so much?” A pretty heavy message for just a light lunch.

So, we very much enjoyed our stay in Frutillar. We had hoped to visit a nearby national forest that is home to some of the oldest trees on the continent, but it wasn’t that nearby and since we already gotten a late start and the prospect of being left by the ship in our first port was not appealing, we decided to return our racehorse.

When we got back to the airport there was a long line of taxis just waiting for business. I went up to the first one and asked how much to return to the port (I had a map I could point to). He showed me a 45. OK Looked like a bargain to me. On the way in, though, we looked at the time and decided we still had time to visit the seaport area called Angelmo, which is not far from the ship. This was agreeable to him, so he took us straight there. Total tab? About 50 USD’s. So, the first guy was pricey, but it turned out to not be the total pasting I thought it had been. So for about $15 I was able to further my traveling education. I won’t bother to enumerate the many lessons learned. 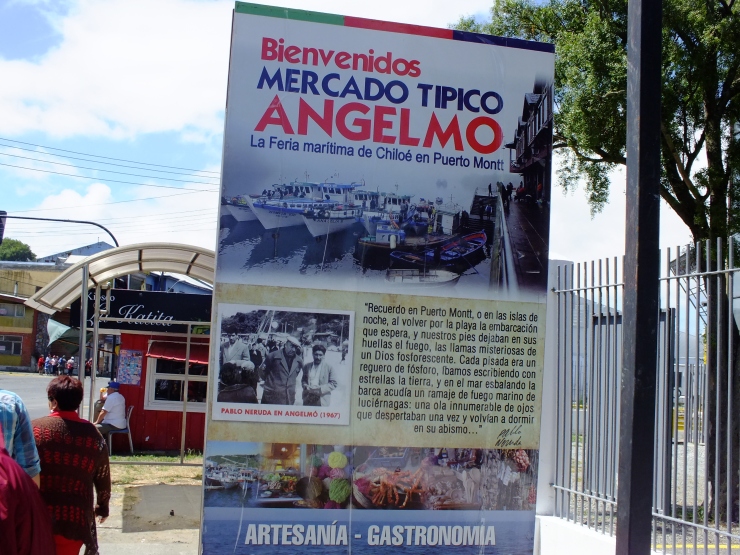 Since we had already had a big lunch we weren’t up for the gastronomia side of things, but we did have an interest in the artesanna. 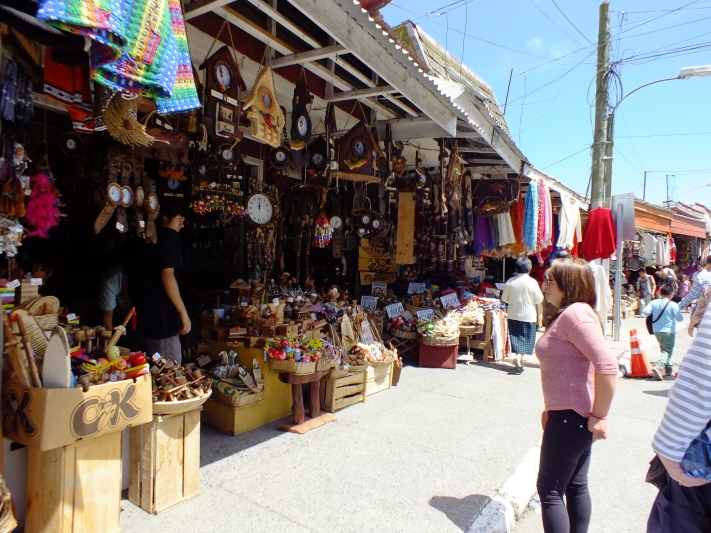 There was no shortage of artisan shops and they wound all the way up main street. But basically it was all leather goods and alpaca sweaters. We did buy a few small things, but in the mid 80’s you are not thinking sweaters. Plus, it was the age old question of where would be put them?

Soon we were back to the ship and heading for our next port. This night we would not be on the open ocean. Chile has a series of inlets and islands very similar to the Inside Passage in Alaska and this is where we were headed. Now the Andes were showing their snowy peaks: 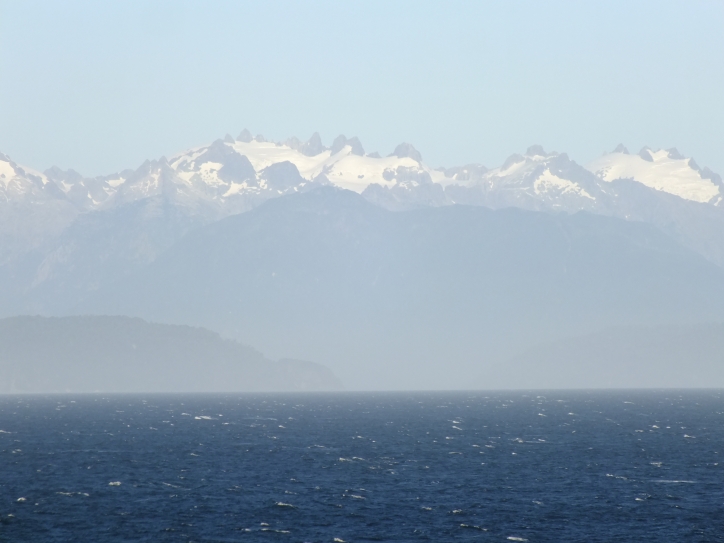 It promised to be a fine evening. 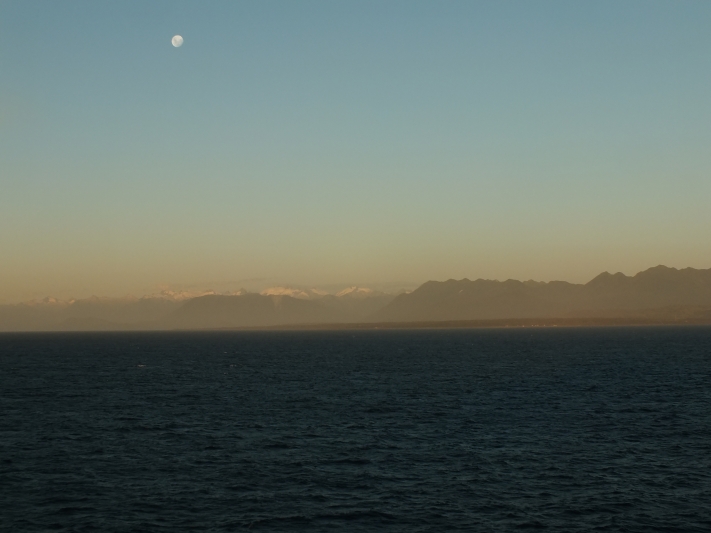 I was on the balcony in our room when I noticed an unusual formation, closer to us than the mountains in the background: 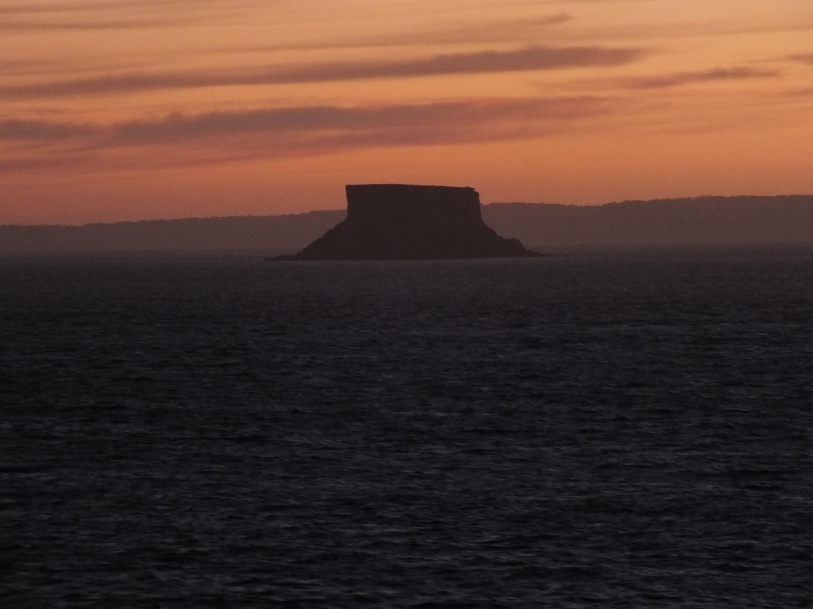 It looked like a butte, as you would see in the southwest US. We got closer: 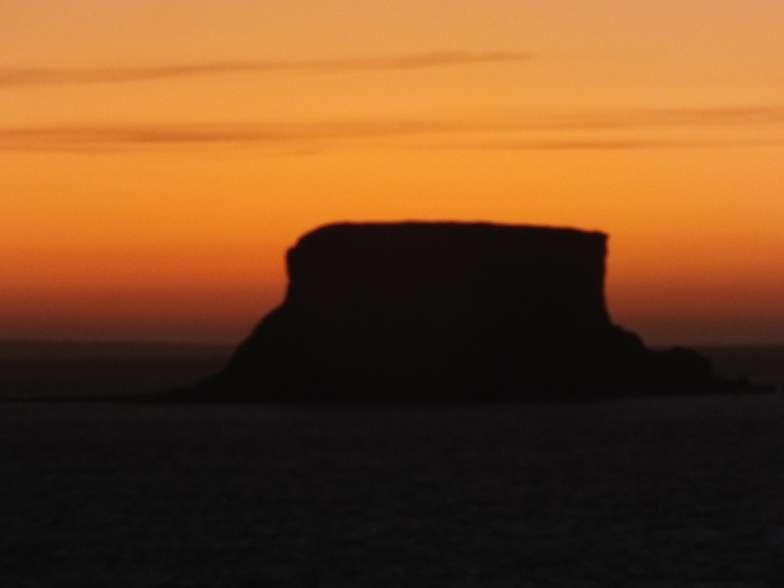 In time we just passed it by. Later I had an opportunity to show this picture to the Captain and asked him if he knew anything about it. To my surprise he told me he’d never seen it before. And he’ been in these waters many times. The reason he has not seen it is there is a Pilot on board in this location and the Pilot takes over the ship. Still…

As predicted, it was a very fine night indeed. 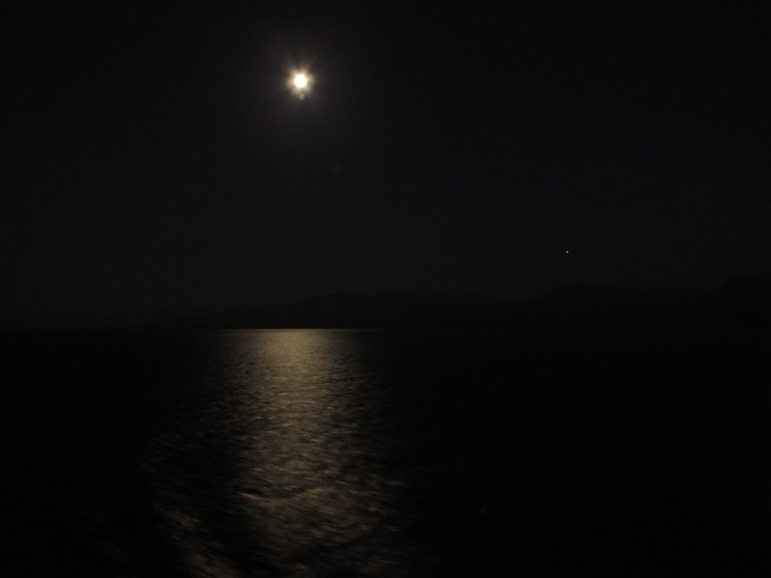 This was the first night we saw the Southern Cross.

One thought on “Puerto Montt”