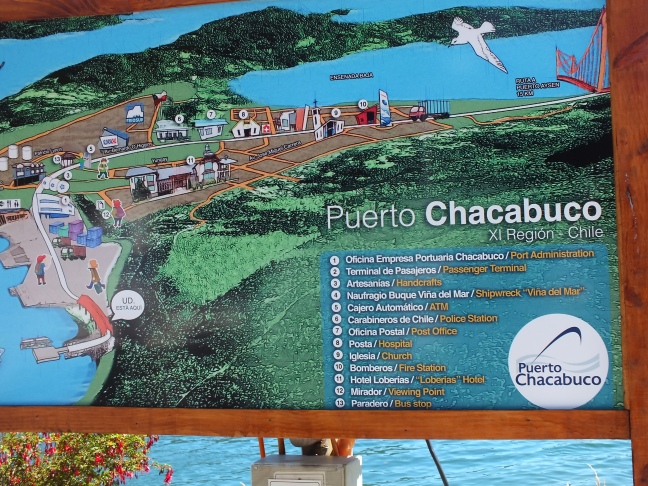 You will notice on the above map that nowhere will you find a number for the taxi service in Puerto Chacabuco. For that reason we booked our first excursion with Travel With Alan. Destination, Rio Simpson National Park. Once again we were tendered to shore, this time to just a little dock that led us directly to our buses. NanSea was there to make sure we a) were wearing our TWA buttons (which we damn well better be), 2) had our color-coded tickets (we did), 3) got aboard the right bus, and 4) remembered which seat we were sitting in, and, most importantly, 5) if we sat in the front the last time we better be seen in the back this time. Since we had not been on the previous excursion we decided to sit in the middle. Once all conditions had been met, we were off! We had a local college student for a guide and he provided some very nice color commentary about life in this part of the world.

As we wound our way through the countryside we passed through breathtaking valleys which huge cliffs on each side. Here was the problem:

The windows were so dirty the camera couldn’t focus. Not only that, the bus never stopped the entire way to the park. This was not the driver’s fault. There was no place to pull over. So, people, take my word for it. This area is absolutely beautiful. Maybe you can find some pictures on line. Clearly this is part of Chile not yet ready for the tourist trade. Eventually, we made it to the park.

The Rio Simpson park is very pretty and easy to hike. But, we could be just as happy in the Hocking Hills. This is not going to put you on a jetliner headed south. But the road leading here could. There is one feature to the park that is pretty cool, though:

If you look on the right side of this rock you will see the outline of a face. We stayed here for about a half hour then went to a nearby waterfall.

Again, very nice. It was here that we ran into a couple of Chilean salmon farmers who had stopped by to check their traps:

Obviously, they have a lot to learn about the salmon trade. There was also a nearby shrine. Shrines are abundant throughout Chile.

From here we wound our way to the village of Aysen. The village lies along the Aysen River, which, the tour guide told us gets it’s name because most of the year there’s ice in it. A welcome play on words, given our language difficulties. Aysen is a very pretty little town, surrounded by mountains.

Soon we were headed back to the ship. It is always nice to see that it is still there, where you left it. 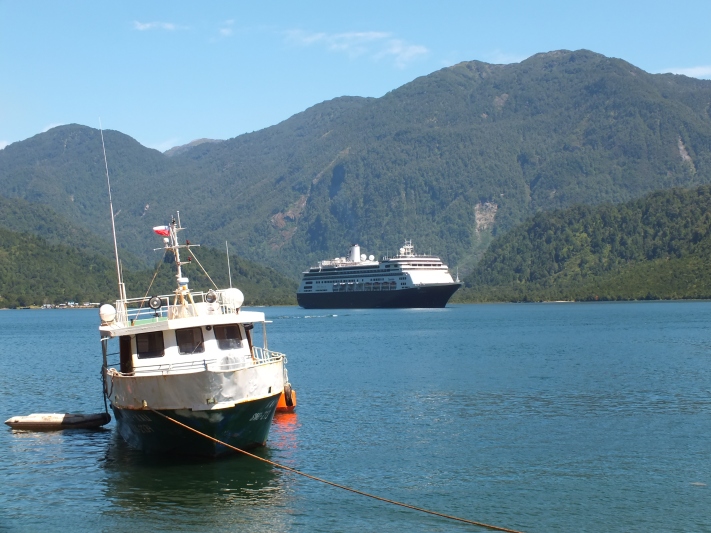 In no time at all we were on our way home . 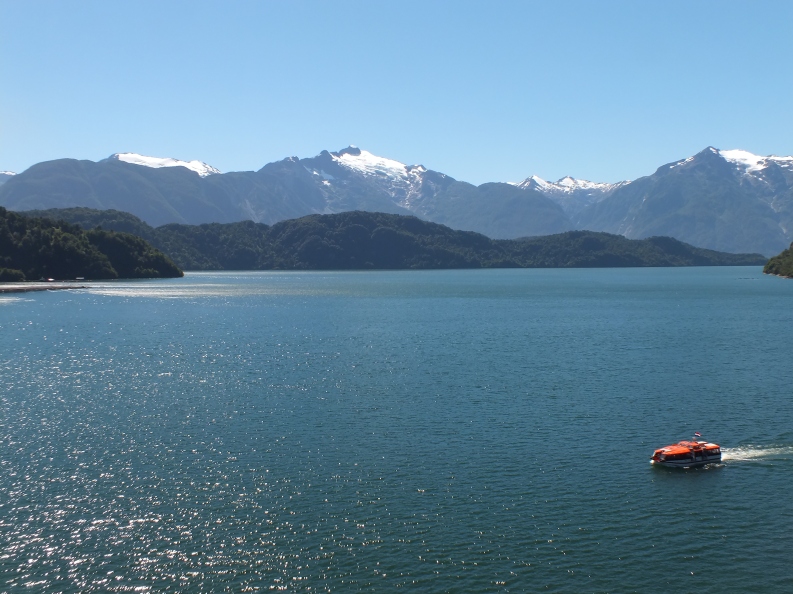 When we got back there was only one thing we needed reminded of:

These are replaced in the ship’s elevators daily. Otherwise, how would we know? On the way out of town I tried to talk Dianne into investing in a little fixer-upper which could easily become our winter home:

It was no sale. Once more we were headed down the fjords:

This was one of the few waterfalls we saw the entire trip, unlike Norway where they were around every corner. Don’t know why, because there’s plenty of snow.

The thing that sets the fjords of Chile apart from Norway or Alaska is, they are totally unspoiled. There are no villages, no cell towers (We weren’t kidding when we said goodby to the cell phones), nothing but trees, mountains and the sea. Rarely did we see even a boat, and when we did the first question was, where did he come from? In Alaska, if you were ever stranded in one these places, you could count on being eaten by something in fairly short order. Down here, though, there is very little wildlife. Not even Devil’s Club to poison you. Almost a letdown. But very, very beautiful. 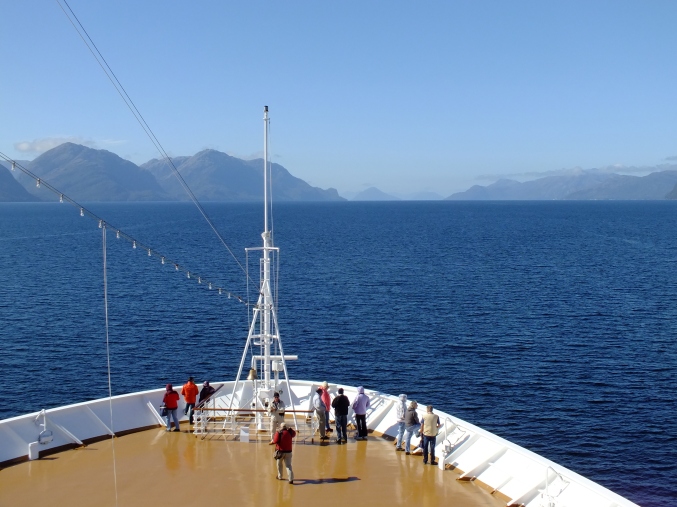 As we were talking to our new friends on the ship it was evident that none of us knew much about Chile and really had no expectations one way or the other. As it turned out, all we could talk about was how incredibly beautiful this place is. Surprise, surprise!

One thought on “Puerto Chacabuco (not a typo)”