Santiago is home to over five million people, or about a third of the entire population of Chile. Of those five million, it appears that roughly a dozen live in actual homes. The rest live in high rise apartments such as these:

The top picture shows the financial district, where our hotel was located. The Andes mountains are in the background. These are boom times for Santiago and all of Chile. It has the most stable government and, by far, the most stable economy in South America. And yet one US dollar is worth 616 Chilean pesos, a conversion rate that had my head spinning. The most commonly used currency is the 10,000 peso bill (worth about $16). I loaded up on these pesos, and those of the other countries we would visit as well, before we left home. In Chile, for about five hundred USD’s I was close to being a billionaire.  Alright, enough of the fun facts. Back to the tour.

After failing to overthrow the government we got back on our buses and headed out for lunch. For this purpose the bus pulls up on a side street which has a number of hot dog joints and the entrance to a dining plaza. The tour guide explains that inside the plaza we will find a many nice restaurants. And, we have a half hour for lunch.

I should also explain that, because so many people booked this cruise, Alan sent one of his staff, a woman who goes by the name NanSea, to manage things. Many of the people with us, we now learned, had done lots of Alan cruises before and were quite used to NanSea. We, of course, were not. So, the stage was set for the first (and not last) conflict we would have with group touring. Here is the aforementioned dining plaza: 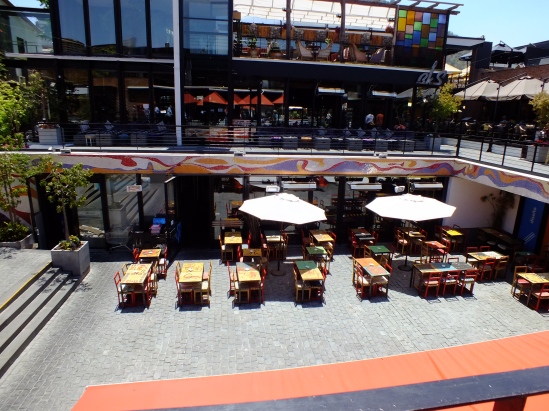 As you can see, it is clean and on this sunny day very inviting with the choice of multiple restaurants. It took us a little while to choose one, but we finally did. We also discovered that one of the people from our tour, traveling alone, was looking for a place so we invited him to join us. Before we even sat down, however, I found a waiter and made it as clear as I could that we were in a hurry and only had, by now, twenty minutes. There was a lady nearby who spoke English and she repeated what I said. His reply, of course, was “no problemo.”

Here is a customer looking stressed with the smiling waiter in the background: 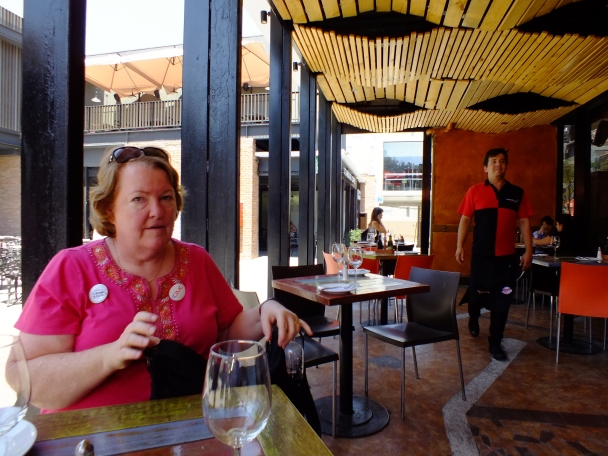 Well, it is close to time to be back on the bus. No food. No waiter. And, along comes NanSea advising us we need to get back on the bus NOW! I was finally able to get the waiter to give us our salads to go and that was that. We held up the bus by at least five or ten minutes. And so, for the first, but let me assure you, not the last time I found myself asking this question: “If you’re not going to give us time, why did you bring us here in the first place?” It turns out everyone else ate at the hot dog joints.

When we have traveled in the past, we first do our homework and settle on places we might like to visit. When we go there, we go for the experience and to enjoy the area. This will often involve restaurants or shops or whatever. When we’ve seen what we want to see and done what we want to do we move on. It was now very clear that none of this would happen on this trip. From the moment the bus stops we are on the clock and the clock never has more than thirty minutes on it. Often less. So, on day one there was reason for concern that traveling with Alan might have been a huge mistake.

After lunch, or lack thereof, we did some more touring and it was pretty clear that all of us were feeling the effects of long flights and a long tour. At last the bus pulled up in front of our hotel:

It is a Best Western property located on a busy street in the financial district. And very near the subway, which I had already studied before we came here. This was a nice hotel, well located and more than suitable for our short stay. We were advised by NanSea to be in the lobby in three hours for our trip to a local restaurant, which was part of the package.

The rest did us good and by our appointed time we were in much more positive frame of mind. Here is the restaurant: 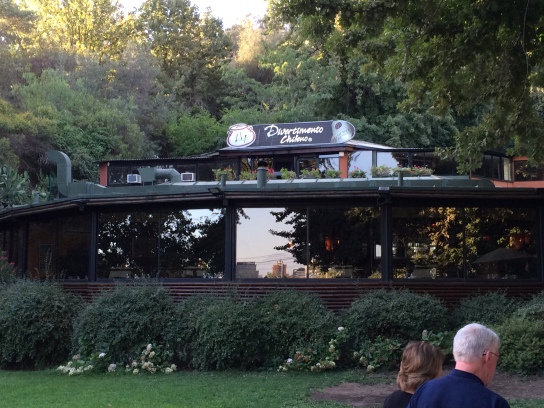 It was located in a beautiful setting near one of the parks and we were seated outside on a gorgeous summer evening. Finally we had an opportunity to meet, and converse with, some of our fellow travelers, who were all very nice and interesting people. The service was buffet style with offerings of various meats, cheeses, side dishes and desserts. It was a feast. And, on this occasion we were treated to our first, and by no means last, introduction to the Chilean national drink: the Pisco Sour. Heavens! They were tasty! And, the wait staff made sure your glass of wine, or whatever, was never empty! We left in a festive mood indeed. Chalk one up to Alan, this was just what we needed!

The next morning we had to be in the lobby at something like 8:00 to go tour the Concha Y Toro winery. I should note that Chile is two hours ahead of Ohio time, so that wasn’t as grueling as it first seemed. We’ve been on a lot of winery tours, but this one was exceptionally nice, with a beautiful grounds and tasty samples, even though a bit early. (The winery opened just for us, another Alan perk.)

After the winery tour we returned to our hotel where we had the rest of the afternoon off. My plan was to take the subway to visit one of the barrios. Dianne had other things to do, so I went out to find the subway and get some day passes. Well, here’s the problem with my Spanish. If any more words are required than “por favor” or “gracias”, then the conversation comes to a grinding halt. A comedian on the ship noted that if you don’t know the local language then what you do is just speak your own language, but louder! Well, that didn’t work entirely. I left the station with two tickets, but not entirely sure if they were what I wanted. I’ve been in enough subways to know I was close, and they didn’t cost very much.

So, I went back and got Dianne and off we went. Santiago, as I read before we left, is divided into a series of barrios, or neighborhoods. Many of them are safe for tourists. A few, however have left tourists in much the same shape as leftists in the days of Pinochet. Those are the ones we wanted to avoid. The barrio we selected is called Bellavista, an arts area near the university. We quickly learned that the tickets I had bought for the subway were one way only. Not a problem and cheaper than a day pass. Off we went! 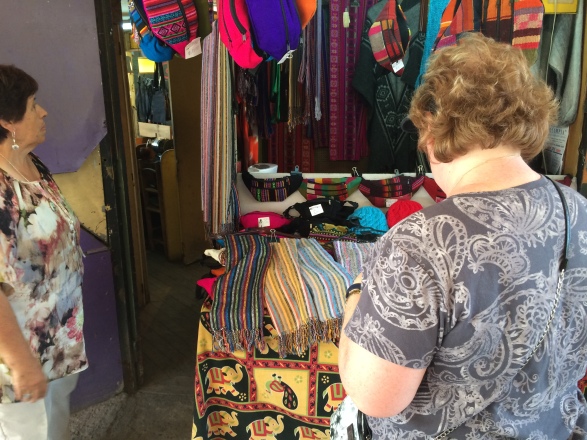 In no time at all we found an artisan area with bargains galore which included some nice things to take home to the girls (close your eyes, Emily!) Then, even better: 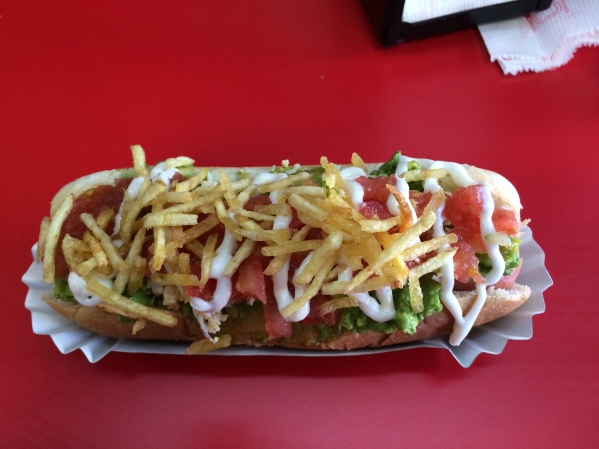 One of the most popular Chilean treats is called a “completo” which is a hot dog covered with every imaginable item, then slathered with, of all things, mayo! This is a tame version, but absolutely delicious! I mean who ever thought of putting shoe string potatoes on a hot dog! That’s why we travel, people! To find out this stuff!

We finished this side trip and a very nice little outdoor mall:

Then it was two more subway tickets to buy and back to the hotel to get ready for another night out. Next day we leave Santiago and head for the coast.